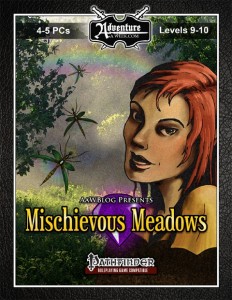 All right, after the last installment of AAWBlog presents suffered from finding its place with how the format works, this time around, we have a different take on the whole concept: This pdf can be divided into 5 quests, all of which can essentially be described as short sidetreks that can (and should be!) linked.

As always, the following discussion dives into SPOILERS. Potential players should jump to the conclusion.

If you’re a player and still here: Brave yourself. You will lose items. The module kicks off with the most loathed of ways of antagonizing PCs and their players: Stealing their hard-earned loot. Worse: The thieves are ridiculously good at what they do and as diminutive fey, they are adept indeed at what they do – with interdimensional sacs and fey-themed haunts supplementing the thefts if the primary antagonists have issue, any DM should not have too many issues. Speaking of which, the issues WILL come – when the thieves return to take more as adventurers fuming with rage, they will have a massive tree with anti-magic zone supplementing them – speaking of which – said tree has an utterly unique ecology and synergy with the diminutive fey that also translates into the combat set-up. Among the bonus-content here, thieving grass and a nasty haunt further complement this nice set-up.

After this, the PCs will have the chance to run a mini-gauntlet, wherein puzzles and something odd will be noted by astute players – the whole scenario of a kind of “save-the-damsel” doesn’t seem to line up…and yes, if they brave the puzzle and challenges, something…ODD happens… The 4th challenge pits the PCs against a group of mad critics – only to be assaulted by fiery avians, the prepfalcons – which, coincidentally, are the bred foes of the somewhat insectoid, thieving fey -a fact that the PCs will learn as they face down a whole army of the thieving creatures, whether with or without mass combat supplemented by arriving prepfalcons. Escaping the massive blaze evoked by the raptors, the PCs will have a chance to literally press a conspicuous red button laced with “Don’t press!”-notes.

And yes, the PCs may at this point have come to the attention of the P.R.A.N.K.S.T.E.R.S.-secret society… The pdf also provides a short deity-write-up and ample DM-advice: And in this instance, that is warranted: The whole collection of encounters deals with eliminating magic items and changing equipment, thus advice on handling player frustration, on merging different play-styles and on ways to handle humor at the table.

The pdf also provides the Deck of Miraculous Luck as a reward system – a deck with 30 cards that provide lucky effects for the players to draw from, with each card sporting a unique bonus/effect to unleash. A fun reward system, though one I wished had more options…and particularly, negative ones as well. But that may be me. As a nice bonus, the pdf comes with back covers for the cards and individual representations for the respective cards – just print out back and front, glue it to card-board and go.

Editing and formatting are very good, I noticed no significant glitches. Layout adheres to AAW games’ two-column full-color standard and the pdf comes fully bookmarked for your convenience. The pdf comes with a solid blend of new and stock art and the cartography, where provided, is okay.

Mike Myler, Justin Andrew Mason, Brian Wiborg Mønster, Rory Toma – gentlemen, this is a better example for the format of AAWBlog presents – the encounters herein may be thematically-linked, but they can relatively easily be dropped into a given campaign on their own. While the overall, connecting storyline between the quests remains pretty opaque for the PCs, these encounters are more self-contained, less burdened by an overarching narrative. The theme here is obviously “get rid of problematic items” and each of the encounters manages to do that with a variety of interesting ways -from haunts to creatures.

With playful items and set-ups, the general sense if one of light-hearted fun. At the same time, though, this collection does feel like it could have used some more care: references in the text that obviously hearken back to the time when these were published as blog posts, hinting towards the next blog post, just hurt the internal consistency of this collection. I also think this pdf’s organization of haunts etc. may be less easy to navigate than the last ones – whereas Cultus Sanguineus collected them in one space, here, they are spread between the individual quests – and taking into account how the encounters herein work better as single ones that build up over multiple modules, that makes things a bit less easy to navigate.

So yeah – the roughly-linked encounters doe work better, though, once again, the overarching plot remains a weakness of the collection – this is NOT a module; this is a collection of content linked by a rough theme – it works for what it is, but once again, transitions remain somewhat problematic here and I wished, both the blog-references had been purged and the transitions had been smoothed. More means for the players to actually find out what is happening would have also been appreciated – as written, this ended with plenty of question-marks above my player’s heads and an ultimate feeling of having missed the point. Still, what is here, is damn fun and as such, I will settle on a final verdict of 3.5 stars, rounded up to 4 for the purpose of this platform.

You can get these fey-themed encounters here on OBS!
Endzeitgeist out.