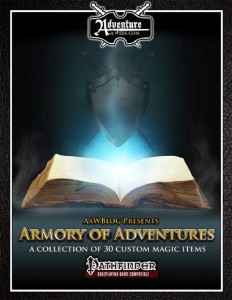 No, you haven’t misread. This many pages for a buck. And yes, the content herein premiered on the AAWBlog before, but ultimately, I’m a dinosaur when it comes to devices – I ban them at my game since I have had the experience of them being constant sources of distraction.

So what exactly do we get? As an example analysis, take the ashenbone axe: A lavishly-illustrated (btw., like most items herein!) axe that emits a light – so far, so bland. Where things become mechanically interesting is with the caveats: When a character is raging (via barbarian rage, a racial ability or spell), the damage increases by +1d8; conversely, when not raging, the damage-output decreases by 1d4. I really like the sentiment of this weapon, though its execution remains somewhat flawed – as written, this will be the axe the barbarian draws while raging, otherwise leaving it sheathed and thus eliminating pretty much the unique drawback. The axe also should explicitly specify that it only conveys its bonus damage while the wielder is subject to a rage-effect, not just “In the hands of a raging character” – since this could be read as a minor ambiguity. A simple solution would be to make this a cursed axe. A further plus, again, one that extends to all items herein, would be the flavorful description of the axe itself provided, as well as the scaling amount of information one can glean from researching it.

A ranger’s hunting axe, poison-spraying locked gauntlets, an evil arcanist’s angel-hunting crossbow, a greatsword that lets rangers with swamp as favored terrain breather underwater (alas, sans proper CL for the underwater breathing) – some interesting options here. What about a vicious blade that only reflects damage back upon the wielder 50% the time if he is pure at heart, but also illuminates such beings in radiant, stealth-negating harmless fire? Whips that can be used to entangle (alas, at a very low DC to escape) and nunchaku that make flurries of blows more effective are also among the interesting options provided herein.

Those familiar with a certain Hrólfr Kraki may be rather pleasantly surprised to find the almost-artifact level Skofnung herein. And yes, I freely admit to having a little “Heck yeah!”-moment here. There would also be a shield that allows for the substitute of hypnotism as an alternative to shield bash damage. There also is a very powerful, nasty ring that makes a character potentially a quasi-vampire. An enchanted spyglass, a dance-compelling gel, enchanted golden dentures (!!!) that fly out to attack foes, puzzle-boxes of holding – there are quite a few downright fun items to be found herein – all for a single buck!

Conclusion:
Editing and formatting are good, though not necessarily perfect. Layout adheres to a beautiful, yet printer-friendly 2-column full-color standard with a surprising amount of pieces of original artwork as well as some stock art. The pdf has no bookmarks, which is a bit of a comfort-detriment. The pdf does sport hyperlinks to d20pfsrd.com, though they are not provided for every spell in a list and thus sometimes are a bit inconsequent in what’s linked and what isn’t.

Mike Myler, Jonathan Ely, Brian Wiborg Mønster, Jacob Michaels, Joshua Taylor and Eric Madsen have delivered perhaps one of the most inexpensive pdfs I’ve seen in a while – the artworks and lore-sections alone render many of the items worthwhile. Now granted, there are some magical items to be found herein that are plot-items pure and simple, but that is not in itself a bad thing -I’d rather have an interesting plot item than a boring +1 flaming thundering keen rapier… Ultimately, this collection is an inexpensive, convenient collection with some downright nice ideas. Now yes, there are a few examples like the one in my picking apart of the ashenbone axe, where one can arguably complain about the wording not being 100% tight. Still, at such a fair price-point, I still consider this a worthwhile purchase. As such, my final verdict will clock in at 3.5 stars, rounded up to 4 for the purpose of this platform.

You can get these items for a mere buck here on OBS!
Endzeitgeist out.