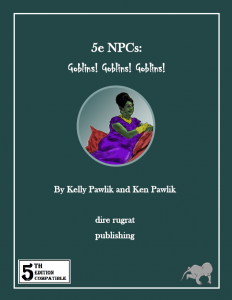 This NPC-collection clocks in at a massive 48 pages, 1 page front cover, 1 page editorial, 1 page ToC, 1 page introduction, 2 pages of advertisement, 1 page SRD, 1 page back cover, leaving us with 40 pages of content, so let’s take a look!

All right, so, first things first: Not all goblins herein are regular goblins; instead, some employ rules from the Moar Goblins-pdf by Dire Rugrat Publishing. It should be noted that all rules taken from that book that are employed herein. This makes the goblins significantly more diverse and interesting and no, you won’t have issues using this book sans Moar Goblins. This book does provide a bit of a teaser for it and provides stats for the Tokoloshe snare trap, the nacht kabouter and the grindylow…and harpoons.

Now, as far as challenge-range is concerned, the material herein ranges from challenge ½ to challenge 12. The presentation of the numerous goblin NPCs herein is detailed: We get the name at the top of the page, a brief summary of the character (like “Goblin Exile, self-imposed”), a brief quote and then, extensive notes on the background-story of the respective NPC – so no, these are not fire-and-forget NPCs, they are proper, fully developed characters. The characters are presented by ascending challenge, beginning with the lowest challenge and moving up the scale.

What type of character can find herein? Well, the first fellow (aptly described by the summary mentioned above) is a goblin who a) is not much of a fighter and b) despised the lack of civility in goblin society; a survivor with boundless optimism, Zazutk Grimheap is anything but grim and sports something I really like about Dire Rugrat’s books: The lack of cynicism and generally…sense of a latent optimism suffusing their books. Sure, the fellow is basically an information broker, but he wants manners and is a pretty happy fellow.

That should not mean that the goblins here are all looking for a hug-party and acceptance, mind you: Take Wottle Skrimjaw, grindylow chief. This fellow is NOT nice. Then again, he is somewhat lazy, which makes for a nice roleplaying opportunity/rewarding of legwork done right. “Yeah, you shouldn’t go in that territory…but if you do…” It’s small bits like that, which make characters feel alive. It should also be noted that quite a few NPCs herein come with suggestions on how to use the character, but that as an aside. While we’re at the topic of tribal leaders: Grunko Whitemane would be one such fellow, one who is particularly adept at felling larger foes…oh, and if the name was no indication, he is a tundra goblin. And yes, the modifications to create rank and file tundra goblins have been included here. A dreadlock-wearing Pukwudgie chieftain, Tiponi, is a strong woman, the first to lead her tribe, in fact!

Next up would be Neeha of Banga Pracira, a rather charming gudro bonga lady…which brings me to another point that may be of interest to you, particularly if you’re new to Dire Rugrat Publishing’s supplements: The NPCs often sport their own signature abilities, often ones that go beyond the obvious defaults, which can add an interesting angle even to characters which usually, challenge-wise, would not pose much of a threat. Speaking of gudra bonga: Vaishikof Gartakara Rupa (challenge 2) (the place is once incorrectly called “Gartaka Rupa”) is an interesting specimen, as his protectiveness and stout build may make him seem almost a bit dwarf-like, while his uncommon heritage and the abilities granted by it add an interesting angle of the supernatural. While we’re on the subject of these, perhaps one of my favorite goblin subspecies: Eakogs Clutternugget is AMAZING. But let me explain: Each goblin herein gets his/her own full-color artwork, which is impressive in and of itself. The goblin merchant’s artwork rocks. However, it is his FUNCTION, which is the draw. Are you running an extensive wilderness/dungeon-campaign and the PCs can’t restock sans 2 sessions of traveling/running? Enter this fellow! Much like e.g. the merchants of Resident Evil 4, for example, he can show up at opportune moments and help out with just the right tools…which he obviously may have stolen somewhere, so potential further trouble can be set up thus as well.

Of course, aforementioned level of playfulness can take a potentially sinister tint – take Royce Mapplethorp, the mighty (challenge 2) goblin herald, whose fightsong is really potent for his allies. Minor quibble here: Only being able to hear as a limitation for its benefits is pretty strong – personally, I’d include a maximum number of targets affected or range-restriction here…otherwise any halfway decent group will get him a magical megaphone sooner or later… But I digress. This fellow may be basically a potent mascot, but he is not necessarily a nice guy… Speaking of which: Know what happens when a rather psychotic goblin kills a cosmonaut that has just injected him with a nanite solution that links him to a central computer? We get a really smart psychotic goblin, who goes on to make a blade that returns to him…and urns mercenary…after all, this vast knowledge at his beck and call can be applied creatively to all manner of topics…Yeah, shades the blade (challenge 6) is a creepy, creepy fellow.

Sometimes, folks are born that are different; most of us have felt that way at one point and for a few of us, this experience of otherness has changed our trajectory in life. Rilidyx Fastbutton is surprisingly good-looking by the standards of most folks…other than goblins. Her mother did not have an easy time, basically being slutshamed for ostensibly consorting with an elf…and after she vanished, Rilidyx ventured forth to find her place in life, charismatic, alluring and surprisingly deadly. Speaking of deadly (and much less pleasant): Fargrakle the despised, at challenge 5, would be a goblin necromancer who specializes in…animating crawling claws. Yeah, this fellow is creepy…

At challenge 3, N’tambu would be a tokoloshe, who is rather unique and no longer bound to serve vengeance seekers. He can drink water to become invisible and is exciting as a redemption story of sorts, one that celebrates the triumph over what one could consider being doomed to be evil. A child of nature and the representation of an almost obligatory trope, Wrelx would be a Wolfrider. Yes, he comes with stats for his wolf. Know what the name of the wolf is? “Grr.” Yes, they have unique synergy tricks. And yes, that name put a smile on my face. Picture it: “What’s the name of your companion?” “Grrr!” “No need to become aggressive, I just asked what his name was!” “Grr!” XD

Call me juvenile, but I can see that in my mind’s eye and it makes me smile.

Also something of a tale of just desserts would be that of Mekan (challenge 7), a former goblin guinea pig for his cruel master, who managed to turn the tables, becoming a fearsome fire specialist in his own right. Oh, and he can delay his magic in a type of spell-like bombs. Ouch.

The trope of the possessed godhand can be found in Flubboks Hugemitt, a goblin, whose right hand has grown to an enormous size and demonic sentience…oh…and Strength 20. Your PCs won’t be laughing about this goblin… Nix takes the idea of the blue (the blue-skinned psionic goblins known from previous editions) and takes a bow to the concept without requiring the introduction of psionics per se, as the mighty Nix behaves as a self-styled deity of the local goblins, with mind blade and potent defenses. Nice nod! She is not alone: Her sibling Zub makes for a deadly second half to the duo, only that his talents manifest as powerful spellcasting…

And then, there would be the final NPC. Koning. King of the Nacht Kabouters – legend to most, doom to many. He comes with no less than 3 lair actions, multiple (properly formatted!) legendary actions and the challenge 12. Oh. And, you know. He knows everything every single nacht kabouter on the same plane knows. Yes, he does have means to be defeated and weak spots – but PCs will probably have to be pretty clever to best this potent foe! As an aside: His missing cap, his weakness…the character’s stats made me immediately come up with an adventure sketch, where woefully underleveled PCs have to best him with brains, rather than brawn…it’s always a good sign when reading a critter makes me immediately have an idea for a whole module…

Editing and formatting, as a whole, are very good, though not perfect on formal and rules-level. As a whole, you should not encounter serious issues here. Layout adheres to a printer.friendly two-column standard with a white background; the statblocks sport parchment-style color-backgrounds to differentiate them. The artworks deserve special mention: There is a ton of them and I haven’t seen most of them before, which is a big plus. There are some original pieces within as well. The pdf comes fully bookmarked for your convenience.

I’ve really come to like Kelly and Ken Pawlik’s style. There is a positive core to their writing, something deeply human that manages to elicit a sense of joy without being naïve or bland. The characters herein are diverse and feel plausible. They are not just soulless fire-and-forget statblocks and they steer clear of the clichés…and even when such tropes are used, they are employed in a sympathetic manner. It’s hard to properly describe, but it could boil down to a sense of empathy with their fictitious creations. You can relate, in some way or another, with quite a few of them, with their motivations and characters. The NPCs herein are relatable and diverse…and frankly, I enjoyed them much more than I expected. There are a couple of real stand-out NPCs in these pages and the price-point of 5 bucks is really fair for the amount of content you get; the bang for buck ratio is rather great here. So yeah, this comes highly recommended, particularly in conjunction with the slightly less impressive Moar Goblins-pdf, if only so you know about the unique goblin-subspecies the Dire Rugrats have dug up! (without it, the pdf loses a bit of its appeal – not much, but a tiny bit of it.) My final verdict will clock in at 5 stars, just short of my seal of approval; a well-made NPC-codex and hopefully, not the last!

You can get these cool gobbo-NPCs here on OBS!

Missing the Moar Goblins-file? You can get for just 2 bucks here on OBS!