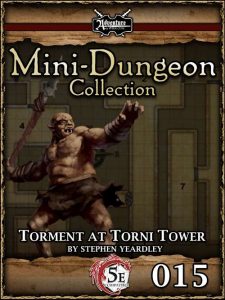 Somervel has not been treated kindly by the seasons – its pale forts, somewhat akin to beaver lodges, earthen mounds on islands in the marshlands, have been isolated for quite a while – most of the complex is below ground, with one tower jutting forth from the mound. Torni’s tower has fallen to the seasons and when he PCs are sent to investigate the place, they are greeted by a haggard female – but that’s just the beginning of the trouble.

Turns out the female is a disguised night hag who not only single-handedly (or better: single-clawedly) took the fortress and slaughtered its inhabitants, she also makes off to rouse her ogre, ettin and troll minions, some of which in states of drunkenness (which is accounted for by the mini-dungeon with nice quick and dirty 5e-rules!) and prepare her detailed and rather awesome tactics – while in 5E, she doesn’t collect stirges to throw at PCs, she instead gets will-o’-wisp allies. What about speaking tubes? Yeah, smart! So, the presentation provides the roster of inhabitants, the rooms and the tactics of the night hag – all in all, providing a surprisingly awesome and best of all, organic mini-dungeon against foes with unique tactics and in a distinct backdrop.

Here’s an issue in the 5E-version – the pdf does not specify how good the hag is at her ruse; here, we would have had a great chance for a bit of social skill use, but we, alas, don’t get that.

Editing and formatting are very good, I noticed no significant glitches apart from the hyperlinks – there are quite a few that don’t work, which is a bit annoying. Layout adheres to a beautiful 2-column full-color standard and the pdf comes sans bookmarks, but needs none at this length. Cartography is full color and surprisingly good for such an inexpensive pdf. The pdf does sport one nice piece of original full-color art – kudos! The cartography, with player and GM-VTT-maps, is nice.

Stephen Yeardley does it again – this mini-dungeon is inspired, cool and does everything right: From an awesome, unique locale to smart adversaries and a surprising amount of fluff crammed into the scant few pages, this mini-dungeon is concise, logical ad downright awesome. The hyperlinks aren’t always properly implemented, which can be slightly annoying. Kyle Crider generally did a good job in conversion, though the pdf does lose a bit in the tactics department. It’s not bad, mind you – not even close. But the PFRPG-version just made me cackle with glee, where this one only made me smile – it’s nice, but if you’re playing both systems, the PFRPG-version is the better one.

This notwithstanding, we still have a nice mini-dungeon here, well worth a final verdict of 4.5 stars, rounded down for the purpose of this platform.

You can get this nice mini-dungeon here on OBS!