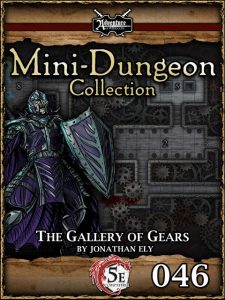 The dreaded summoner (once, oddly, referred to as sorcerer – somewhat inconsistent) Vlexigorn, known for the delight he takes in enslaving demons, was about to meet his match, when the archmage Lanthanus was on his trail. Unfortunately, the summoner has managed, with the help of his glabrezu-aide Chor-da ta’al, to get the better of the archmage and use his portal to escape to Mechanus – the resulting instability has the creature on the clock (Get it? Mechanus…clock? Sorry, will hit myself for that one later…) and stranded in the material plane -he can’t return for now and in 3 hours, he’ll be banished here! The wounded outsider thus beseeches the PCs to enter the clockwork world of Mechanus and stop the glabrezu.

Upon entering the place, the PCs will at least find the bloody remains of the summoner – which alas, means that the glabrezu is now free-willed. Bypassing the gears that claimed the summoner’s life requires a Dexterity check, a failure of which clocks in at a whopping…2d10. This summoner guy seems to have been quite whimpy. The depictions of bellows, scrying devices and the like are flavorful. While the original PFRPG-version was a horrible train-wreck, the 5E-version sports more sensible checks, DCs and tactics for the big boss – for the mini-dungeon basically is a prolonged boss-fight, with relatively detailed tactics given for the glabrezu.. As a minor complaint: Lightning damage is erroneously called electrical damage once.

In the original version, this mini-dungeon is horrible; Kyle Crider’s change of antagonists and tactics provided and his general revisions of Jonathan Ely’s module actually make the 5E-version vastly superior to the PFRPG original – to the point where I consider it a fun, if not perfect module. My final verdict will clock in at 4 stars – well done, Mr. Crider!