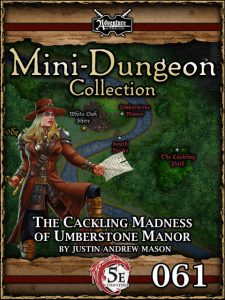 This pdf clocks in at 2 pages and is a mini-dungeon. This means we get 2 pages content, including a solid map and all item/monster-stats hyperlinked and thus, absent from the pdf, with only deviations from the statblocks being noted for the GM. Big plus: This mini-dungeon comes both a GM and a player-friendly version of the area depicted, all ready for VTT-use. Kudos!

So, first thing you’ll notice is that this mini-dungeon is actually no dungeon – instead, it is basically an adventure sketch of sorts, presenting the basic set-up, plot and providing guidelines to run this adventure, all on two pages. The eponymous Umberstone Manor is the ancestral seat of the Valniboom family, antique dealers of some renown; the manor is situated in the shadow of a massive mountain and, indeed, is the private playground of the family and, indeed, the entire umberstone hill carries a really, really potent global effect that will have PCs struggle, even at high levels. Really nice: Not only the small details, but this curse in particular have been properly adjusted for 5e-gameplay, making good use of the system’s mechanics.

This is but a sketch of a full scenario, but the amount of details it provides in scant few words is AMAZING. How the PCs interact with the factions, what they do – it all depends on you, but this makes a great 1-page adventure set-up that is more interesting than many that I’ve read. Yes, it needs some fleshing out, obviously, but Justin Andrew Mason’s angle here works admirably well. My one complaint here is that I’d have loved to see this fully developed as a big sandbox; you know, fully depicted villages, progression of everyone becoming ever more manic… the scope feels almost too ambitious for even the sketch-formula of this MD. The 5e-version is just as efficient as the PFRPG-iteration. My final verdict will be 4.5 stars, rounded up for the purpose of this platform.

You can get this adventure-sketch here on OBS!