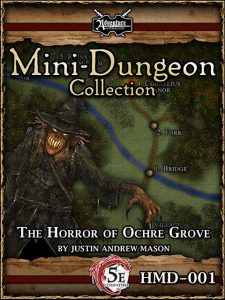 Unfortunately for all involved, Margaret is a sorceress (oni statblocks are used) who proceeded to bide her time, finally managing to summon both an incubus (nice touch for 5e re enemy choice!) as well as the spirit of her erstwhile lover. She plans to have Hammond’s spirit take care of Victor and his son, while she kidnaps the Cornelius daughters to sacrifice them and invoke a curse upon the land.

After managing to cross the stream, the PCs will witness a dark rider with a kid towed up, Victor Cornelius in hot pursuit. From the burning distillery, though, there is a sound – and guess what, the module actually features a small, branching plotline here: It has consequences if the PCs immediately pursue the riders, and same goes for checking out the voice at the burning distillery. Victor’s wife Amelia is currently bleeding out, claiming that stick figures (animated scarecrows that use the stats of animated armors) have abducted her girls…and if the PCs visit the site later, they will only find a corpse and a trail. If the PCs instead follow the riders, they’ll arrive when a desperate Victor, half smashed below his horse, is forced to watch the wraith that once was Hammond, who has strung up his son. Without intervention, the wraith will first kill Victor’s son and then Victor. If the PCs split up, they will have a tough time dealing with both threats. (In an ironic twist, this is where Hammond’s bones lie – Victor indeed did kill his competitor…)

Justin Andrew Mason provides a nice, brief sidetrek here – the instance of a branching path is a pretty sweet inclusion for such a small module, and while the revenge-yarn featured herein isn’t exactly groundbreaking, it doesn’t have to be. The 5e-version, to me, actually works a bit better than the PF 1 version; if you have the luxury of choice, then this is the slightly superior version. As a whole, this is a fun sidetrek and thus should be considered to be worthy of a final verdict of 4 stars.