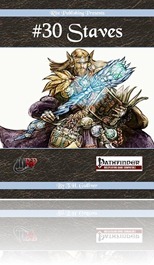 This pdf from Rite Publishing is 15 pages long, 1 page front cover, 1 page editorial, 1page SRD and 1 page advertisement, leaving us with 11 pages of content for 30 staves, so let’s check this out!

As has become the tradition with supplements by Rite Publishing, this pdf once again kicks off with an awesome piece of prose to supplement the crunch, this time by Pers Veilbron to his friend, the by now rather well-known Owain Northway – journalist, sleuth and our guide to the upcoming and highly anticipated Questhaven magical renaissance city-setting.

After the well-written piece of lore, we are introduced to two staves, the twistroot staff that lest you manipulate and communicate with plants and the Planetripper’s Staff which enables you to banish and contact outsiders as well as plane shift and create lesser demin-planes. Ok, that’s nice and all – but relatively tame and not too exciting. And hence also my excitement about there “only” being two of these regular staves in this pdf: After these two, we are immediately introduced to wondrous staves – a total of 19 of these staves are presented. But what do they do? Well, essentially they are regular staves that offer an additional benefit to the wielder, ranging from doubling the duration of any cast basic detect-spell to the option to destroy a staff and thus add a symbol of force to the object against which it is smashed onwards to the option to get +2 to certain skills, +2 to hex DCs and even the option to plant a staff and thus enhance a garden (and cast heroes feast…) the wondrous staves are well-designed and provide some nice additional bonuses that help enhance their flair.

3 of the new staves belong to another cool category, the one that treats staves as weapons and comes with full rules on how to create such sturdy staves. Rather cool is that some of the abilities of these staves work differently when in weapon- or staff (casting)-mode, adding options and versatility to the PC’s arsenal. I just wished that more of such dual effects had been included. The third category of staves are the legendary staves: Here, the option and feats to create lesser staves, first introduced in Marc Radle’s excellent “Krazy Kragnar’s Magic Staff Emporium” by SGG (which you SHOULD own, seriously – it made one of my top-ten lists…) is expanded: A total of 5 legendary staves are presented, all of which come in three versions: A lesser, a standard and a greater version, as in Krazy Kragnar’s pdf. However, not content with just utilizing these rules, the staves are supplemented in multiple ways: First, we get advice on how to use them alternatively as minor artefacts. Secondly, DMs are not only aided in their integration into a game, but also get a history for each staff, a suggested means of destruction and even a suggestion for a ritual to upgrade the staff e.g. from its standard to its greater variant help to further enhance these staves if chosen to be used as minor artefacts. Better yet, these bits of fluff can also be used with the non-artefact versions, enhancing the staves greatly and making sure that they are not yet another boomstick.

Those of you who own “#30 Traps for Tombs”, also by T.H. Gulliver and imho one of the best trap-books written for PFRPG might recall the tantalizing bits of history on the land of tombs and the major artefact that completes this little pdf adds another such bit of trivia as well as a rather nice option: If you happen to want to run Gary Gygax’s Necropolis – this staff fits right in.

Editing and formatting are good, though not perfect: I noticed glitches like “de*mon” and similar minor flaws. Layout adheres to RiP’s 2-column full-colour standard and while I had seen the full-colour staves herein before, I did enjoy that illustrations for some were provided. Generally, I love the idea of weaponized staves and having them in “modes” with multiple options to use the respective charges. I also liked the wondrous staves, though the true stars of this pdf for me are the staves of legend, those nifty pieces of equipment with their histories, nice fluff and adding more content in the style of one of my favourite equipment books ever.

However, not all per se is awesome: Call me spoiled, but since T.H. Gulliver’s “#30 intelligent magic items” awesome histories and stories, I expected to see some similar treatments for the staves. Yes, I’m aware that this might be unfair. And yes, I realize that this cool, humble pdf did not have such a design-goal. Nevertheless, I caught myself wondering why not the whole pdf deals with awesome staves of legend or the mechanically interesting weapon-staves. Or why the weapon staves and wondrous staves don’t get their own stories/pieces of fluff. Why per se not a truly significant flaw, the combination with the minor editing glitches means that the pdf is not up to the stellar standard set by its immediate predecessor. And that’s why I will settle for a final verdict of 4 stars – I hope to see a sequel with more staves of legend.

30 Staves is available from: