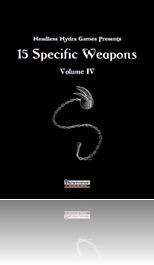 In contrast to most introductions to the topic of weapons, this pdf actually starts with an interesting introduction – advice is provided to DMs who seek to insert weapons into their games and the cultural perspective that led to the development of these martial instruments of mayhem is taken into the focus. While not providing earth-shattering insights, the thoughts that are conveyed are something to keep in mind when inserting a new weapon into your game.

That being said, we get, apart from the new specific weapons, a new weapon quality (that adds sonic damage, a reprinted table of the basic weapon stats and a table to roll for them, if you’re so inclined.

Headless Hydra Games are great at making magic feel…well, magical. uncommon. Strange. Distinct. And the same can be applied to the weapons herein. You won’t find a single weapon in these pages that only has some weapon qualities stapled to a name and instead are provided several interesting items that may open up whole new tactics. Take the large adamantine warhammer “Earthwrack” – by pounding it on the ground, the wielder may create difficult terrain. Or the back-watching boar-spear, which is a twist on the dancing weapon – instead of attacking, the spear literally watches your back and can brace itself against attacks and defend you. There’s also a modular repeating crossbow with a bayonet and on the iconic side: “Impact Storm”. This lucerne hammer can be held to the sky and, after a battle-cry by the wielder, he is struck be lightning for damage, but also damage surrounding foes with a sonic blast that doubles as a bull-rush. If you don’t consider that metal and awesome, I don’t know what would be.

However, there is one particular weapon I have a true gripe with: Assassin’s Mercy. A keen kama+2, this weapon may maximize his/her sneak attack damage, but only once per victim. That’s the only restriction. Other than that, it can be used unlimited times per day. On a crit, sneak attack is added to the damage, even against targets usually immune to sneak attack. This is broken in two ways: Immunities are not called immunities, because they can be offset by a 24800 GP-weapon. An artefact? Ok, I can get behind that. But a weapon in this price range? Worse, imagine warfare: A camp of low-to mid-level soldiers. A high-level assassin. Guaranteed death, all around. Replace that with a squad of assassins with blades like these and we have a death-squad par excellence. Don’t fear the next orc-invasion. Two flanking rogues can break the whole mob. Not going to happen in my game.

Editing and formatting are top-notch, I didn’t notice any glitches. Layout adheres to a book-style 2-column standard and is nice to look at. the artworks for some of the weapons provided herein is of high-quality and the pdf comes fully bookmarked. All in all, I really enjoyed this installment of the “15 specific weapons”-line. Apart from the one item I consider broken, I had a lot of fun with the iconic weaponry herein and look forward to inflicting them on my players. The price-point practically can’t be beat and, while I’d usually go 4 stars for this pdf due to aforementioned gripe, the low price makes me settle on 4.5, rounded up to 5 instead.

15 Specific Weapons, Vol 4 is available from: