101 Not So Random Encounters: Urban 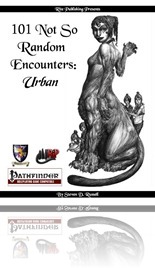 This installment of Rite Publishing‘s 101-series is different and that becomes readily apparent by taking a look at the page-count – 51 pages, 1 devoted to front cover, 1 page editorial, 1 page SRD and 1 page advertisement, leaving a whopping total of 47 (!!!) pages of content devoted to new encounters, so let’s check them out!

If you’re a patron of Questhaven (Rite Publishing’s upcoming city-setting), you’ll be familiar with the basic premise of this pdf, if not, I’d suggest especially players to jump to the conclusion. Just let it be said, that the basic premise is awesome and that this pdf takes a completely different approach to encounters than e.g. one can see in Raging Swan’s excellent “Caves & Caverns”. Instead, the creatures indeed are distinctly “Not so” random. This pdf is dedicated to me (thank you, Steve!) for reviews good and bad – so in which category does this one fall?

You have been warned. Still here? All right! In the magical renaissance of Questhaven, there is an organization called “The Fold”, essentially an organization of organized monsters – think “The Godfather” with monsters. Worse, all the individual monsters can thus combine their powers, making the Fold a formidable force indeed. Spawned from the rich background currently being developed in the Questhaven-project, this installment of the “101-series” provides us a plethora of NPCs that are tied together by this frame-organization. It should be noted, however, that the individual entries can be taken and used by their own – in no way are you restricted by the narratives to use the beings herein as part of the Fold.

It should also be known that most of the creatures herein have more than one use, one CR respectively and can not only be considered foes to kill, but actually intriguing characters to interact with. Need an example? What about the Rakshasa maharaja who awaits the natural death of his powerful wife to reincarnate her as one of his own people. Oh, and she’s an advanced exemplar harridan lamia. (With full stat block!) Said rakshasa also gets his own, modified war juggernaut. Even better, while not every NPC herein gets a full statblock, where applicable, quick modifications provided in the entries can be applied to the basic statblocks.

Not only are there multiple instances for interesting (and often rarely used) beasts that have been made true characters, including a whole network of relationships entwining the different component parts of this cell of the Fold, the characters also can be considered beyond all doubt iconic: Take Jack Straw, for example: A pale stranger that has lost all ties with mankind and usually appears disguised as a scarecrow! Undead, gunslinging scarecrows? Yes, please! Or take lonely Skanda of the thousand whispers: A collective of thousands of mandragora plants, the creature comes with both a single, swarm and collective form and takes up three of the entries – and its roots are, truly, everywhere – keeping a secret from this spymaster should provide to be a rather significant challenge. Hunting-falcon style domesticated stirges? Medusa apothecaries? Or what about an enforcer who is actually a dream-spectre and known as the “Romantic Nightmare” due to its disturbing courtship habits?

In the end, the pdf provides tables by party levels for the creatures to roll, if you’re so inclined.

Editing and formatting are very good – while I noticed some minor glitches, they were few and far in-between and did not impede my enjoyment of the pdf. Layout adheres to RiP’s two-column standard and the artworks are ok. The pdf comes with bookmarks for every 10 NPCs – Cr-information for the respective beings would have helped. I’ll come right out and say it: This pdf is not perfect in its formal criteria – there could be more bookmarks and there are minor glitches. Usually, that would deter from my enjoyment of the pdf enough to warrant a downgrade in the final rating. However: This pdf is awesome. Steven D. Russell is an expert writer and I’m a huge fan of his fluff. Enjoyable to the extreme, this pdf is one of the rare pdfs that immediately make you come up not with a hook, not with an adventure-idea, but with a whole array of possibilities, enough to spark a whole campaign in fact. It is rare these days that a pdf can truly surprise me with its imaginative potential. Rarer even is the pdf that has me smile at the coolness of the idea and indeed, this pdf had me smile – a lot.

Colorful enough to be the cast of a novel (or a whole series of them) the beings herein a so different from what one usually expects that I can wholeheartedly say that NONE of the beings herein can be considered filler. Add to that the intricate web of connections and social relationships and you not only get a vast variety of interesting creatures, but also a portray of a complex crime family that has a staggering array of options and strategies at their disposal, challenging your PCs when trying to outwit the Fold. The writing and imaginative potential contained in these pages is superior and frankly, the characters in most novels are less colorful.

This is one of the installments of the “101 series” that BELONGS into any well-stocked GM-library – and if you’re e.g. planning an urban campaign, this is essentially a must. Even better, if your own campaign has become stale, take this pdf and make the creatures herein perform a hostile takeover of a local underworld or even a kingdom and watch your players struggle. The potential is vast and thus, in spite of my minor gripes, I’ll settle for a full verdict of 5 stars + endzeitgeist seal of approval.

101 Not So Random Encounters: Urban is available from: