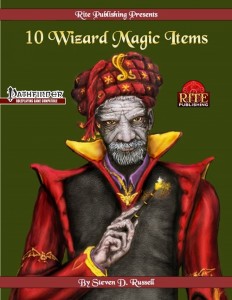 That out of the way, let’s take a look at the items, shall we? The first item, the boots of jaunting, will probably immediately end on the wish-list of any wizard interested in a longer lifespan – they grant motes of movement, a mini-pool of 3 points per day. The lesser ones allow the wizard to use a swift action to escape grapples or teleport into a standing position. The standard version lets the wizard blink automatically away from critical hits or any attacks that would reduce the wizard to below 0 hp – if the wizard manages a second save equal to DC 10 + 1/2 attack bonus or DC of the ability, the damage is negated. Inspired by death roll, this one does have one remnant that refers to “rogue” instead of “character” or “wizard.” The greater set also has the option for short-range teleportation. Damn cool items that would be utterly op, were it not for their limited uses. Still pretty strong for the price point (greater boots cost a mere 6300 GP – that is *very* liberal…), but that may just be me.

The next item, the Emerald Familiar, is pretty cool – it can be tossed to the floor (and reforms the following day) and increase the size of the wizard’s familiar into…let’s say, nasty dimensions – the greater variant increases sizes by 3 categories, including natural weapons, attribute bonuses, etc.! Yes, that is awesome. However, the item fails to tell us what its lesser and standard versions do – I assume +1 and +2 size categories with respective bonuses, but I can’t be sure. Odd how such a glaring omission could creep in.

The emerald of expectation comes in no less than 10 variants – one for each spell level and one that can contain up to two spell levels. What does this item-class do? It allows the wizard to swap a prepared spell with a spell of an equal level or lower (provided the spell is upgraded to the target spell level via metamagic) from her spellbook 1/day. Generally, i enjoy this type of item since it allows for an increased flexibility, without treading too hard on the toes of spontaneous casters. that being said, the item-class fails to specify how long the transfer takes – 1 minute? A swift action? I can’t say whether this is balanced or not since it lacks this crucial piece of information, rendering the whole item-class wide open to DM-interpretation and unusable as written.

Gloves of the Ray allow you to increase the range of spells with a range of touch to close as per the Reach Spell feat a limited amount of times per day, but they now require ranged touch attacks. The different item qualities denote the spell level at which these items cap – lesser can cast up to 3rd, standard up to 6th and greater up to 9th level spells this way. Additionally, the gloves can 3/day as an immediate action completely negate an incoming ray, with the max level of the incoming ray following the same formula. And here, we have an issue in my book – flat-out negation sans any caster level checks or the like feel pretty op to me, especially in addition to the already significant tricks the gloves provide anyway. On a more nitpicky side, could e.g. a 3rd level spell modified by metamagic beyond 3rd level be negated thus by the lesser gloves or not? I don’t know.

The Mantle of the Schoolmaster doubles the duration of the 8th level wizard school class feature, while diviners and scryers may 1/day spontaneously convert a spell into a divination (scrying) spell of equal level or lower. Cool item that enhances one of the few truly iconic wizard tricks – kudos! That being said, the class feature is called “arcane” schools, not “wizard’s” school. Yeah, I know, nitpicky.

The Wizard’s Battered Hat is high in concept and imagery-wise – it acts as a handy haversack for spellbooks only. Additionally, though, whenever the wizard identifies a spell from his spell-list being cast (here at DC 15 + double spell-level), the spell is automatically inscribed in the book without cost or space required in the spellbook. Wait. What? Come again? So: No cost. Makes spellbooks contains suddenly and mysteriously infinite spells. And allows you to learn spells ON SIGHT? Instantly? WUT??? This is ARTIFACT-level power, not an item for 1,800 GP! Beyond breaking the obvious restrictions on spellbooks (and time management, when playing in time-critical situations or e.g. the downtime rules), this allows wizards extremely easy access to just about all spells they can wish for. Plus: Studying? PFF, got mah hat! Easy step to wizard supremacy: Collect wizards. Craft items for 900 GP per item. Cast all spells you can find. Failed? Cast again. Done. You could disperse vast quantities of spells within days among legions of wizards. This beats in-game logic, even in a high-fantasy context, so hard it goes into the corner to cry its eyeballs out. And even if you make this a unique item, the hat does not specify whether this means that every Spellcraft check has the potential to trigger this or whether the learning-check has to be made with that specific intent. This item needs a bludgeoning with the nerf-bat, even more so than any of the other items herein.

The pdf also provides a minor artifact/legacy item with Alymmanthar, “the Dire Wand” – to give you a brief run-down: legacy items are specific items that grow in power with your character level, increase their potency thus and require specific tasks to become better. Their chosen wielder senses an omen. This item has been crafted by some of the legends of Questhaven from a new special material and sports generally some nice abilities that involve dampening magic items, high jacking them and yes, even golems, as well as dire magic item related curses. The base ability of the staff could have used some minor streamlining in its wording – the staff allows you to eat magic items to turn it into custom wands, but the separation of the charge-gaining and assimilation somewhat make the item a bit *harder* to get.

Editing and formatting of this pdf are, more so than even in the installment of paladin items, its weak point – the pdf has a number of cosmetic glitches, missing text and rules rendered opaque and some typos are in here. Layout adheres to Rite Publishing’s 2-column full-color standard. The pdf comes with nice full-color artworks I haven’t seen before and is fully bookmarked for your convenience, in spite of its short size.

Steven D. Russell can craft superb crunch and yes, once again, just about all items herein are high concept and cool. That being said, they also, more often than not, feel underpriced this time around. And yes, I know, we get a lot bang for buck and even with the glitches, you probably get cooler items than in many comparable publications. But this pdf is also deeply flawed, to the point where some items lack crucial information, while others are utterly broken. This pdf’s high concept content would be worth 5 stars + seal of approval, easily. Its execution, though, is haunted by lack of rules-editing and editing one’s own work is hard – I know that from experience. Hence, I can imagine how these glitches have crept in. Be that as it may, in spite of loving the concepts herein, I’m afraid I cannot rate this higher than a 3 stars, though the ideas deserve better.

You can get this inspired, but flawed pdf here on OBS and here on d20pfsrd.com’s shop.