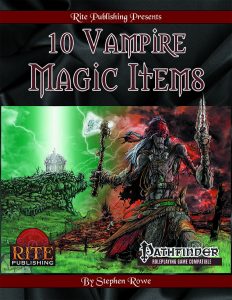 This expansion-pdf for Rite Publishing’s phenomenal „Play VTM-style vampires in PFRPG“-toolkit „In the Company of Vampires“ clocks in at 12 pages, 1 page front cover, 1 page editorial, 1 page SRD, 1 page advertisement, leaving us with 8 pages of content, so let’s take a look!

Okay, we begin not with the first item, but with an optional rule – the pdf introduces Blood Crafting. Warlock blood nobles (aka, the Tremere-stand-ins) have, RAW, a bit of a problem with crafting; this issue is addressed by the blood crafting rules. The vampire requires a blood magic blood talent equal to or greater than the level of the spell required; blood magic VI would, for example, act as a substitute for spells of level 6 and below. To make up for this increased flexibility, the crafting vampire employing blood crafting must expend the spell level of the emulated spell in cruor points on every day engaged in blood crafting. Cost in cuor is cumulative, which means that complex items will require a LOT of blood…blood that the vampire must somehow provide… However, there is a flavorful risk to using blood crafting – if the vampire fails the Spellcraft check by 5 or more, he can still finish the crafting process successfully, but the item may become thirsty, requiring blood to work properly. But hey, at least the materials aren’t wasted! (Plus: Love the general concept!)

Okay, so this was already pretty cool…now let’s take a look at the items! The first would be the blood doll – these effigies come in 5 variants and act as a painless means to donate blood…and temporarily store it. While the stored blood slowly dissipates, these dolls should provide a colossal boon for vampires embarking into lifeless environments. Big plus! Blood staves come in 6 variants – these staves can be used by vampires employing blood magic to 1/day per spell level, reduce the cruor cost of blood magic employed. Nice. Elixirs of lineage are really cool: Basically, this liquid acts as a vampire Litmus test – drop a blood inside and you’ll see color-changes depending on lineage. I love this item. It feels incredibly right for vampiric nobles obsessed with the purity of their bloodline…and can make for some really cool infiltration complications.

But we move even further past simple items, as the pdf introduces the item category raiment of the ancients – it should be noted that this entry contains discrepancies between the truths of moroi myth and what was elaborated upon in the account given by sovereign Evelyn Arlstead in ItC: Vampires – this is intentional and should be considered to be a mild potential SPOILER-warning. These items are rare, valuable and can only be properly crafted by vampires; they require components taken from vanquished elders; it takes a vanquished elder or ancient vampire to provide sufficiently powerful components. The astute reader will realize at this point that the respective raiments are basically the proof and in-game justification that is analogue to the defeat of the antediluvians in VtM, though, taking the system’s peculiarities into account, the narrative takes on a different turn beyond the impending doom of their return, setting the moroi more clearly apart. It should also be noted that these items have different benefits for vampires and other beings that are not of the respective, associated bloodline. It should also be noted that partial mitigation of the respective curse is part of the items, further enforcing their special place within the context of the moroi. In case you haven’t noticed – these are basically the most sought-after items of the race and could be defined as almost-artifacts…depending on the power-level of your campaign and considering the genesis of the items, they may well be considered to be such, though crafting costs etc. are provided, should your PCs manage to defeat such an elder vampire. As a huge fan of making items out of vanquished foes in RPGs, I applaud this notion. It just makes magic feel more magical.

Grisly Fetish bracelets of the nosferatu allow vampires to suppress their curse and better conceal themselves. Heart’s blood is a special magic weapon property (+2 or +4) that allows for particularly potent attack-deflection – the ancient one is borderline insane and allows for Reflex saves to deflect any attack (not an action), with only enhancement bonus modifying the roll. Usually, I’d be screaming hellfire and brimstone right now, but considering the requirements, that the item will not be for sale (unless you’re playing a WEIRD campaign) and its implications, I consider it frankly to be closer to an artifact than to a regular weapon and will let it stand. If you dish out these items like candy, you probably expected a brutal power-surge. Well, obliged. Memorial tomes of the warlock bloodline enhance blood magic and also act as a kind of spellbook of sorts for the blood magic engine (which is a more complex rules-operation than you’d expect!) – kudos! The inspired’s relic of betrayal allows the vampires employing them to mitigate the superstition and also fortifies them versus channeling. Minor hiccup: The item is an amulet, but the elder version calls it a ring in a cut-copy-paste remnant.

The shade’s secret urn is worn in the belt slot and helps versus sunlight exposure and light, while the sovereign’s shattered crown helps versus the mirror problem…which would be as well a place as any to note that the tales of how the elders were slain make SENSE. They tie into the lore, curses, etc. and add a layer of depth to the items. The nightcaller’s stolen fur allows for indefinite hibernation in the ancient versus and mitigates the homesoil restriction.

Now beyond these, the pdf explains some subtleties of the vampire condition and the potent curse that sparked the condition, which make, frankly, for a fantastic backdrop for a whole vampiric campaign. Speaking of which…Raiments actually echo the true, original sin that gave rise to the moroi – and thus, moroi gaining access to multiple raiments can enjoy synergy effects beyond the already potent item effects…the layers of lore woven with a scant few lines are inspiring.

I challenge you to find better wrought crunch and lore for a single buck. Stephen Rowe is not content with just writing some items; instead, he has crafted a glorious, must-have expansion for “In the Company of Vampires.” The rules for blood crafting alone warrant getting this book; the non-raiment items are great and the raiments OOZE flavor; they can arguably inspire adventures on their own…perhaps even campaigns. The thread of lore is intricately woven through the crunch presented herein, adding a further dimension to the humble pdf.

This costs a paltry $0.99. For 8 pages of fantastic, vampiric goodness. Seriously, if you own In the Company of Vampires, then this is pretty much the DEFINITION of “Must-have”. Heck, even if you’re not interested in ItC: Vampires (Why? Beyond the player option, it makes for a rather nifty GM-toolkit, even if you don’t want playable vampires!), the raiments may very well constitute an excellent reason t get this pdf and its parent-file…the anti-arch-vampire story practically writes itself. Heck, blood crafting has very creepy implications when you ponder the consequences… So yeah.

GET THIS. Now! It’s less than a buck!

Forgot the rating? Obviously, this is 5 stars + seal of approval.

haven’t yet picked up In the Company of Vampires? You can find that book here on OBS!