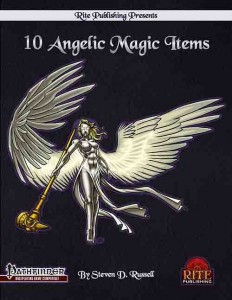 This pdf clocks in at 10 pages, 1 page front cover, 1 page editorial, 1 page SRD, 1 page advertisement, leaving us with 6 pages of content, so let’s take a look!

But before we dive into the subject matter, let’s make a few basics clear – for one, while these items are intended to be used in conjunction with Rite Publishing’s “In the Company of Angels,” I’m going to try to rate it as its own autonomous supplement. Secondly, like all RiP-books detailing items in the 10-series, you actually get much more than 10 items: Quite a few items come in different versions, with the distinction being made between lesser, standard and greater versions of the item – so more content than promised by the title!

We begin this pdf with the big brother of the merciful special weapon quality, the +2-equivalent compassionate that may 3/day paralyze foes it damages – pretty nasty, but also an enchantment that helps heroes be heroes – and I love that!

The Celestial Lenses increase a celestial paragon’s pool of providence and angelic senses (or an increase of these), while non-angelic wearers get providence with 2 points in the pool – for 2K. I’m not a fan of this item due to multiple reasons: For one, the celestial paragon’s class isn’t exactly perfectly balanced. But I said I’d review this on its own – and here, one can see a central class feature as a very inexpensive class feature. I don’t particularly like this on a personal level and as a reviewer, I’m not sold on the very low price for the gaining of a class feature.

Sandals of the Celestial Step, available in 3 versions, can be used 1/day, 3/day or 5/day, each time netting you +1 5-foot step, which can stack with the regular one – I like these ones and their pricing seems fitting – kudos here! The Bardic Empyrean is another item I’m not a fan of – +5 levels for the purpose of celestial weapon providence ability is pretty nasty – full step-increase…even before the +2 points for the pool of providence. Non-paragons gain the ability and the celestial weapon providence of a 5th level character – see my complaints on the lenses on character ability-sharing.

Bracers of Purity, available in 3 versions allow for SP or providence-powered rerolls of effects affecting the character – per se pretty cool…but the item becomes pretty OP once you have a base-class that casts via SPs…like I have…a couple of them, in fact. GMs beware, especially since the more powerful bracers allow for omni-rerolls of all effects affecting the character when activated. The gauntlets of contrition, again, available in 3 steps allows the wearer to demand a target to confess his or her sins, essentially delivering a nasty save-or-suck. On the plus-side, the included option to revert alignment-changes thus is intriguing. The Helm of Heaven’s Ire is pretty awesome – expend a point of providence to afflict a creature (or more at higher levels) with a divine curse – one of 14! From becoming barren/infertile to gaining cataracts or taking the ability to speak, the curses are nasty, but thematically concise.

The Ring of Celestial Salvation is essentially an extra life – whenever you’d be slain or banished, expend all SPs and providence to negate the attack. The lack of a minimum-requirement of SPs or the like to be consumed is nasty – the item should require one of them, at least. At 4550 Gp, it is a pretty inexpensive ring, one saved from being broken by the fact that it crumbles upon being used. While I maintain that the item should be limited regarding which classes/characters can use it and the cost they pay, I generally like the notion of the extra-life-ring…as long as the PCs can craft these. Rich PCs could otherwise pretty much cheese the hell out of this item, an option that a cool-down à la “Every character can only be saved once per year from death by such a ring.” would have easily avoided. The Tabard of Angelic paragons is brutal, increasing soulfire and AC by 5 levels, the DC of a heavenly gift by +2 or gains 2 providence + a single 1st level providence. Once again – see my comments of items above – they are pretty much mirrored here.

The pdf also provides a legacy item, i.e. a powerful magic item with a complex history, requirements and scaling abilities – this time, this would be Shawmay-Aphim, also known as Heaven’s Wrath. Crafted from the new material golden wildwood, this +1 warhammer gains the guided quality, decreasing the miss chance. The hammer also allows you to penalize the attacks of foes with natural attacks, allowing a GM to reward smart fighting – for the item e.g. also can be used to decreases the efficiency of sources of extraordinary or supernatural abilities – nice! Spell and SP-draining, dimensionally anchoring foes…that may be nice. At the highest level, the wielder may 1/day pronounce a curse that can strip a target of his magical powers. I like this general idea, but at 12th level, it feels a bit soon to me – why? Because the follow-up feels less powerful to me…and ultimately, more interesting in-game: AoE shaken may be cool, but the final ability provides a 50% HIT chance – all attacks targeting the creature have a 50% to hit, even if they would miss. This is VERY powerful…but also an actually innovative rule that has quite some potential!

Editing and formatting are back to the level I generally assume from Rite Publishing – very good, with some minor typos! Layout adheres to Rite Publishing’s two-column full-color standard and the pdf has more awesome full-color artworks than a pdf of this size and price-point usually features – kudos! The pdf comes fully bookmarked, in spite of its brevity – again, kudos for going the extra mile.

Steven D. Russell, in this pdf, feels like he’s getting back to his game as a designer – at least, that’s the impression I have here – the rules-wording is once again back to his precision, while maintaining the trademark high-concept approach that made me a fan of his designs in the first place. That being said, I’m not sold on the precise balancing of several abilities, mainly because they are tied to a pdf I consider pretty OP – a fact that tarnishes this pdf’s usefulness for me as a person. At the same time, as a reviewer, I try to rate this on its own merits and the concept of the hit chance is an actually unique one I haven’t seen before – and one that can, when carefully handled, provided a whole array of interesting (but hard to balance) design opportunities. I only witness such a concept very rarely these days and, to me, it is worth A LOT. Then, there’d be the fact that this is a rather inexpensive pdf…and that, at some tables, the high power level of celestial paragons may fit. It’s due to these that I will settle on a rating of 3.5 stars, rounding up to 4 for the purpose of this platform. GMs of more gritty games should beware, though.