Zeitgeist #6: Revelations from the Mouth of a Madman

Zeitgeist #6: Revelations from the Mouth of a Madman 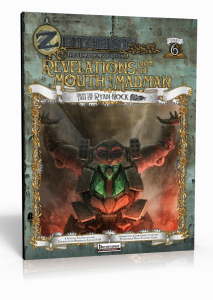 The first installment of the second act of what has so far been a ridiculously awesome AP clocks in at 85 pages, 1 page front cover, 1 page editorial, 1 page ToC,1 page SRD, 1 page back cover, leaving us with 80 pages of content, so let’s take a look, shall we?

Now first things first – this being an adventure-review, the following contains SPOILERS. Potential players of the Zeitgeist AP should NOT spoil this saga and instead jump to the conclusion.

All right, only DMs left? Sure? Well, you were warned.

Apart from advice for adapting the module to home campaigns and eliminating the steampunk fluff, there is, as has become the tradition with Zeitgeist, a LOT going on. It’s been 2 months since the PCs managed to lure away the colossus in adventure #5 and the wheels of the conspiracies never stop turning – and now, the PCs may have a chance to remedy that. The constables are briefed to find one (mad?) savant called Tinker Oddcog, potentially one of the people involved in the creation of the titanic construct and quite probably in league with the shadowy conspiracy that has acted as the primary antagonistic force so far. Only problem is – the guy knew when to run and has left the country. Thus, the constables are off to the nation of Ber, including full-blown ship teleportation, to find the gnome before his erstwhile employers do and silence him for good. making matters more complicated would be the mostly humanoid population of the land the PCs are supposed to enter, requiring quite a bit of tact not to offend gnolls, orcs etc..

To make matters more complicated, the PCs are asked to testify at the trial of their old ally Brakken – and yes, proper cross-examination and verdicts – all not based solely on dice, but rather on ROLEplaying – kudos and two thumbs up for keeping the whole affair…well…fair. Oh, by the way, at this point, the opposition has probably made its first move already, their first assassination attempt hopefully thwarted by the PCs. After local politics have been cleared, alliances been cemented or lost, the PCs will be off towards the Summer Court – only to face a massive stampede prompted by tyrannosauruses. Plural. Yeah. Ouch, but also damn awesome! Here, the PCs will have a chance to prove their worth by braving a massive maze for the spectators – in this decadent game, the PCs will both have to survive the *relatively* harmless bears – and the mechanical, very much lethal Battle enhanced animalistic robot – B.E.A.R., all while navigating and hopefully avoiding the teleport traps…

Once the challenge has been won or lost, the true game begins – in something I have never seen in a module before -competitive rail-road construction espionage action. No. I’m not kidding. The level of detail here, including time-line and key-moments with their sabotage-attempts and issues make running this one pretty awesome indeed! Oh, and when I’m saying intrigue, I mean it – mind control, dealing with parasites and optionally, saving Wolgang von Recklinghausen from a particularly bug-affine tribe…quite abunch to be done. Finally, the bruse may let the constables meet Tinker – only to have him be revealed as a suicidal simulacra. Worse, a whole bunch of guards go replicant and start trying to assassinate the Bruse and everyone else in reach. Whether the ruler dies or not, the trail leads to the Isla dolas Focas, where a massive naval battle looms (oh joy, much ship-block stats building to use better naval rules…) -after that, the PCs will have to brave a pump station (preferably without having it blow up in their faces or the faces of the hostages, for that matter) – here, the PCs may, guided by a duplicant’s voice, finally receive some information from tinker as they venture down into a volcanic foundry – only to have Risuri steel baron Pemberton show his true face as the mastermind behind Tinker’s disappearance…and as one of the last covert-living dragons, hell-bent on taking Ber as his own. Between assembly-lines and magma, the PCs will have to defeat Tinker’s power-armor, a draconic robot, Pemberton’s duplicant…and save the gnome from certain death – quite a task, even before the Obscurati complicate things further and well worthy of the Zeitgeist AP!

Now beyond the magic items, NPCs etc., parties that manage to retrieve tinker may benefit from his brilliance and guide the development of unique, experimental technology in the campaign – is that cool or what? Beyond player-friendly versions of the maps, we also receive hand-outs and handy tracking sheets to easily run the rather awesome railroad mini-game.
Conclusion:

Editing and formatting are very good, though not as superb as in most Zeitgeist-installments – I noticed slightly more glitches and e.g. references pointing to “Page XX” or references to e.g. the “bloodied” condition from 4th edition than usual. Layout adheres to Zeitgeist’s unique 2-column full color standard with a mix of original and stock art, the latter always thematically fitting. It should be noted that the pdf is layered, allowing you to remove graphical elements for more printer-friendly results. The pdf comes fully bookmarked for your convenience. Cartography is nice and leaves nothing to be desired.

Ryan Nock’s sixth installment of the AP, by necessity, is less in your face than #5 – Act 2 needs to be set up, with the interwoven plot-lines building slowly up to something new and different. That being said, the AP manages to retain its strengths – diverse challenges, excessive roleplaying, compelling politics and backstabbing intrigues, all set against a backdrop of importance, of varied challenges – and if my account of the adventure’s plot seems convoluted, then only because there actually is so much more going on in these pages. The consequences of old relationships resurfacing and reacting properly, the omnipresent consequences of the PC’s actions – all of these conspire to make this yet another superb module. While it is not the best of the Zeitgeist modules and my first reaction was a slight urge to rate it a bit down, that wouldn’t have been fair; It still stands triumphantly among its brethren and manages to build up steam after the vast array of legendary things that happened in #5.

When compared to just about every other module, this still breathes iconic ideas, dares to demand smart players and is dauntingly novel and inspired – not losing steam after 6 installments, the massive machinery that is Zeitgeist waltzes on without losing steam – and maintaining this level of complexity and diversity for this long is damn impressive. I’m looking forward to the whole of Act 2 – final verdict: Once again, 5 stars + seal of approval, though this time around, it was a slightly closer decision than before.

If you prefer 4th edition, you may get it here for that rules-set!