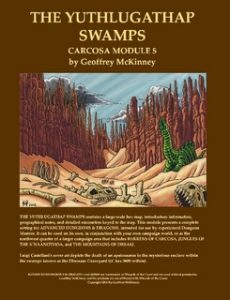 Structure-wise, each of the modules begins with a basic recap of some concepts of Carcosa, as well as some general regional descriptions before we get a massive list of the hexes.

All right, all of that out of the way, let’s start with the first of these, The Yuthlugathap Swamps! From here on out, the SPOILERS reign. Potential players should jump to the conclusion.

All right, only referees around? Great! Okay, so we begin with perhaps one of the coolest and most high-impact hexes herein: A mound of no less than 100 Tyrannosaurus Rex skulls, piled atop the essence of a vanquished Old One – disturbing this mound can drive a whole campaign, for a life-leeching aura spreads. There is reason it is highly stigmatized by the locals and there are several hexes referencing this dread, cataclysmic place.

The few settlements that can be found in the hostile environments of the swamp are home to peculiar, primitive cultures like the shell people or rock people can be found, but humans of the various colors are not the dominant cultures here. Instead, the supplement provides remnants of the civilization of serpent-folk…and lizardfolk enclaves. Unlike the other Carocsan hex-crawls, these swamps are LITTERED with what feels like a gazillion of lizerdfolk enclaves…which, unfortunately, do not really offer much beyond differences in traditions, weaponry used , etc. – the lizardfolk are the worst part of the hex-crawl and they, unfortunately, are a pretty dominant one. Their respective enclaves do not sport enough differentiation, a fact further enhanced by their annoyingly similar nomenclature, which makes keeping track of their names a bit of a hassle – I like the use of “ssi-“ as a prefix to denote a leader, but really, did we need one-syllable names? To give you a list that is NOT exhaustive: Ssi-Goh, Ssi-Sak, Ssi-Vah, Ssi-Vis, Ssi-Hur, Ssi-Zog, Ssi-Gir, Ssi-Gor, Ssi-Zof…do you get what I mean? There are turtle lizard-men. They do not mechanically diverge from the others. The whole aspect becomes tiring pretty quickly.

Now, this would not be Carcosa without a couple of creative spawns of ole’ Shubby, and we get, for example, a spawn mimicking the golden fleece and similarly delightfully weird options can be found. An undead, buried fetus emitting painful psychic shrieks is certainly the most grim of the hexes, and we can encounter giant animals, plunder serpent-men treasure troves and interrupt the rest of dead sorcerers. So yes, the themes are here. There are some further hexes that stand out, like a Lazarus-pit seen through the lens of Carcosa or a lake of magical, iridescent slime. The dinosaur graveyard depicted on the cover similarly should elicit some wonder at the table.

On the rules-level, I noticed quite a few effects that are tied to “being in the swamp” – an issue here would be that the module does not specify the region meant: The whole hex-map or just the region? Does entering the Boggy Lake count as leaving the swamp? Not sure.

Editing and formatting are good, but not perfect – I noticed a few minor hiccups. As mentioned before, the module does not sport much in any formal aesthetics department, so I’m not going to reiterate its shortcomings once more here.

Geoffrey McKinney’s swamps…are surprisingly the by far weakest part of the series. I expected strange vermin and infections, mutations, full-blown weirdness…and instead, we get an endless parade of bland micro-enclaves of lizardfolk, punctuated with a couple of specks of brilliance. This is the one module in the series that turned into a chore for me to finish and, compared to the others, it almost feels as though another author penned it. It’s not necessarily bad, but I’d also consider it to be on the negative side of a mixed bag. Hence, my final verdict will clock in at 2.5 stars, rounded up due to in dubio pro reo.