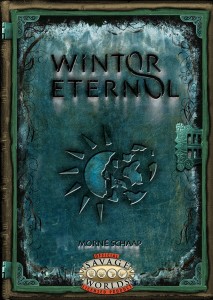 Okay, so here I am, time and again, complaining about rehashed tropes – so does this book bring something new to the table? The answer to this is surprisingly complex. But let me begin. Winter Eternal takes place on the continent Ehlerrac on the world Azegar – said place was an environment of lush and diverse biomes, where people and magic prospered for ages. Then, the sun died in the event commonly referred to as Sun Death – which is kind of correct…and not. A sputtering globe still hangs in the sky and when the resulting cataclysms had passed, life continued – perhaps due to its sputtering last emissions, perhaps due to powerful magics…fact is, that instant heat death and entropy did not claim the continent: The Green Council tried to maintain life, the orc wars began and what once were camps of struggling survivors evolved into cities adapting to the harsh environment of Ehlerrac – massive heat spells keeping life possible in distinct zones. Similarly, current innovations have created protected roads, so-called archways, connecting them and the unearthing of strange crystals, dubbed sunshards, speaks of a revolution in technology in the making.

This is interesting indeed from a set-perspective, though its roots cannot be denied: As much as this book’s diverse blurbs claim otherwise, this is pretty much a quintessential post-apocalyptic setting: It may not sport the nuclear/magical fallout component, but, from pockets of civilization with odd customs to rare means of making survival possible, this draws on tropes of the genre and generally inverses the spin one usually sees: Winter Eternal could well be considered to be the mirror image of Dark Sun. Mind you, this is not a bad thing – I just don’t get why this book’s advertisement tries so hard to deny these roots.

But back to the subject matter at hand – we’re entering Ehlerrac 140 years after globes of life-saving light went up above the remaining cities and people by now have adapted to the strange lands and thus, character creation sports short blurbs for diverse characters and races as well as providing several edges and hindrances. Playable race-wise, we get dwarves, elves, goblins, grayns, half-folk, humans, mekellions and the orc-tainted. Generally, the races are well-balanced, though the mekellions are arguably the strongest of the races portrayed herein, at least on paper…with one catch. They’re reptilians. Ina world defined by the capital letters word “COLD” – so go figure: You may be stealthy and a natural climber, but susceptibility to cold of all things…ouch. A total of 2 hindrances and 7 edges are provided for your perusal to expand your character’s options.

Similarly, thereafter, we are introduced to a variety of items, which also features several unique things like velopedals, sunshard tents and the like – and it is here, the book shows its most baffling organization decision: Interspersed throughout this book, you’ll note backer-inspired cards of characters, which sport full stats and background information. I *like* the respective write-ups do not get me wrong – however, having NPC-stats show right up in the middle of another section is just bad organization: It drags you out of the section and may even constitute a SPOILER in the player-centric sections of the book. Perhaps I’m a prick, but this bothers me to no end.

Now, to return to at least proverbially greener pastures, let us take a look at how the world is depicted, for it is here that Winter Eternal once again manages to shine. While you should not expect scifi-levels of concise logic in a setting that contains copious amounts of magic, the world as depicted herein does feel surprisingly concise: From lighting conditions to the archways themselves, the culture and its defining characteristics are depicted in a rather captivating manner, with Summer and Autumn zones and the respective cities in particular being surprisingly interesting: Beyond sporting neat maps, ghost-haunted Deadfalls, Dwarven Drogan and the sound-amplifying Echo all make for unique places that draw upon high-concept, unique ideas – particularly wallside, a city build along the walls in a huge chasm, is a visually-stunning idea I absolutely adored. Similarly, the respective organizations – which include the voiceless that convey the messages from the dead or the waywalkers make sense in the world they inhabit. 4 deities, 3 hells, calendars and festivals – there is quite a bit of material here, most of which firmly belongs in the high-concept class…though this breadth and density of good ideas does come at a price, namely at the price of details.

You see, the respective entries portraying these components ultimately remain sketchy – whether it’s the deities or cities, you always are left with an awesome concept, perhaps a great map…and then have to do the heavy lifting of adding the details. Similarly, while there is a section on magic and its impact/restrictions, I ultimately found myself wondering whether there should not be more in that regard as well. The game master section collates rules for different environmental zones and helps convey a bit of the flavor of the setting and sports some more detailed and captivating hooks, like the chaotic, potentially mutating red shards. Similarly, fluff-only entries for the lost orc tribes, the dead ruler and similar high-concept ideas touched upon in the book are appreciated – but also feel, at least to me, brief. The book’s bestiary provides a diverse selection of creatures to combat, some of which sport gorgeous full-color artworks. That being said, mechanics-wise, while not bad, you probably won’t be blown away by the rather classic array of creatures herein – stone golem? Check. Zombie? Check. Going a step further and bringing something more unique here more often would have benefited this book.

Winter Eternal concludes with a thank you-list interspersed with more NPCs, a map of Ehlerrac and a handy index.

Editing and formatting are okay – I noticed quite an array of punctuation glitches and couldn’t shake the feeling that a capable editor could have made the prose a bit more alive – while not in all instances, there are some cases where it feels too stiff for the glorious concepts it tries to convey. Layout adheres to a two-column standard in full color that has a relatively wide margin in the middle of the page, which is used to enter comments and quotes – a nice idea, though one that obviously artificially bloats the page-count and makes the book longer than its content would require it to be. The pdf comes fully bookmarked with nested bookmarks. Artwork-wise, the book sports absolutely glorious full-color pieces that oscillate with some less awesome, more cartoony pieces. The aforementioned NPC-cards, thrown haphazardly through the book, sport solid b/w-artworks – though their different style clashes, also on an aesthetic level, with the presentation of the respective chapters.

Author Morné Schaap has created a setting that breathes being a labor of love – this does present a significant array of imagination and panache. At the same time, this book has two significant flaws. Number one pertains the NPC-cards – Why not organize all those NPCs in their own, GM-only chapter? There is no good reason for this jarring layout-decision that takes you, time and again, out of the prose of the chapter you’re reading….to the point, where I got really annoyed by them. Think about it, you’re reading about the climate of Athas and *poof*, suddenly, 2 pages of statblocks and NPC-backgrounds, then more on climate. Call me a prick, but this annoyed me to no end.

Then again, I may have an idea why this decision was made…you see, the layout already leaves a pretty wide margin…and the cards stretch the respective sub-header entries. The whole history of Ehlerrac…is covered in 4 pages. The wilderness…in 4 pages…which include artworks and two cards. And *THAT*’s the problem of Winter Eternal: Winter Eternal is not a campaign setting in the traditional sense – it’s a sketch of a campaign setting, a basic gazetteer. When you take away the copious, interesting NPC-cards, you are left with precious few pieces of information on the world – granted, enough to run the game in Ehlerrac…but, at least to me, not enough.

Don’t get me wrong: Winter Eternal is a fantastic idea-mine that shows a creative mind at work, a depiction of a world wherein winter is not only coming – it’s here to stay. But at the same time, this book constantly show you awesome concept y…to then not elaborate on it, leaving you to flesh out the brilliant idea. As an idea-mine, this is great – as a campaign setting, it, at least to me, fell short due to not providing enough material for the respective components, due to being too sketchy in several of its key components.

Do I want to read more on Ehlerrac? Yes! I see vast potential in this setting to truly be unique, awesome and distinct. But at the same time, this book, on its own, left me like a good bowl of Ramen: Happy and satisfied for a very brief period…and then, the hunger started settling back in and I started thinking about it. How to rate this, then? Well, for one, I have written this review thrice now – the author is continuously streamlining the book, which is great to see. As per the posting of this review, I am very much hopeful for the future supplements planned for Winter Eternal and caring about a book…is a good thing. Still, ultimately, this one left me at once excited and with a distinct impression of having read a great, if flawed offering that simply could have used more material to make its respective aspects shine. My final verdict will hence clock in at 3.5 stars, rounded up due to in dubio pro reo, to 4 stars for the purpose of this platforms – nice as an idea mine, somewhat short of what I expect from a campaign setting. If you’re looking for the latter, round down.

You can get this inspired, if brief first foray into Ehlerrac here on OBS!