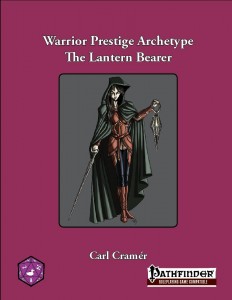 This pdf of the Warrior Prestige Archetype-series clocks in at 10 pages, 1 page front cover, 1 page editorial/introduction (explaining the base concept of the series), 1 page SRD, leaving us with 7 pages of content, so let’s take a look!

Lantern Bearers receive d10, 6+Int skills, full BAB-progression, good fort- and ref-saves, proficiency with simple and martial weapons, shields and light and medium armor. At 1st level, the Lantern bearer receives favored enemy and adds another at 5th level and every 5 levels thereafter. They also begin the game with the track special quality and wild empathy. Now regarding the combat style and its progression, the Prestige Archetype does something rather well – it not only covers the base ranger styles, and instead also provide one for natural weapons, mounted combat, finesse, sword and board, etc. – nice! (Also: Concise in the feat-availability/feat-list expansion over the levels.)

At 4th level, hunter’s bond provides either the option to grant favored enemy bonuses to allies or an animal companion at char-level-3 and wis-based prepared spellcasting that is expanded by a bunch of spells that help ferret out the wicked (including e.g. invisibility purge) – and yes, third level nets endurance, for the few of you that are like me and actually care about this feat due to a lot of environmental threats. 7th level provides woodland stride and at 8th level, weapons wielded counts as cold iron and the level also nets fast tracking.

Editing and formatting are very good, I noticed no glitches. Layout adheres to Purple Duck Games’ printer-friendly two-column standard and the pdf has no bookmarks and comes sans art apart from the cover.

Carl Cramér’s Lantern Bearer is a return to form for the series – the Lantern Bearer boils down to a magical bounty hunter, a variant ranger that is pretty fun and bereft of the majority of druidy flavor, rendering this a great choice for city watches and similar hunters of the most dangerous prey. This WPA is very much a humble, concise and well-working take on the concept. It does not reinvent the wheel – but it doesn’t have to. While I am not 100% happy with the holy aura-ability, that constitutes the only true complaint I can field against this pdf. I will use these guys. My only gripe, apart from that, remains the missed opportunity of actually providing a signature lantern as magic item or directly lantern-related abilities. My final verdict will hence clock in at 4.5 stars, rounded down to 4 for the purpose of this platform.

You can get this nice Prestige Archetype here on OBS and here on d20pfsrd.com’s shop!