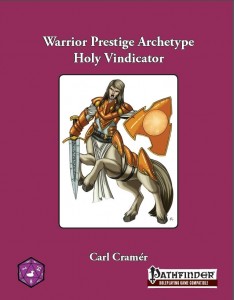 So, this time around, we take a look at the base-class-version of the Holy Vindicator. This guy receives d12, full BAB-progression, good fort- and will-saves, 2+Int skills per level, full armor and weapon proficiency (except tower shields) and has an aura akin to a cleric. They receive limited, prepared divine spells drawn from the cleric’s spell-list of up to 4th level. These spells can be spontaneously converted into healing spells. Rather uncommon, the spells are governed by Cha, not Wis. At first level, the holy vindicator receives channel energy, which improves by 1 die every odd level thereafter. This also is governed by Cha, but the holy vindicator also receives channel smite as a 1st level bonus feat. It should be noted that healing spells employed by 6th level or higher vindicators are automatically empowered, but conversely, mass cures do not apply to other creatures when including the vindicator. At 16th level, the spells are maximized instead. Oddly, both have no proper inverse benefit for inflict/negative energy-using evil, unholy vindicators, though other abilities take the like into account.

Vindicator’s shield is gained at 2nd level and unfortunately retains the wonky wording of the PrC’s ability – why not simply state in unambiguous terms that the bonus is lost upon being subject to a successful attack? This would have gotten rid of the horrible mess of the original ability,

At 4th level, the vindicator receives stigmata, with action economy-scaling every 4 levels thereafter – start and end are first handled as a standard action, later as a free action at 16th level. For 1/4 class level bleed, the vindicator receives the same as a numerical bonus to either attack rolls, weapon damage, AC, CL or saving throws. The ability is actually more solid in its wording than the original PrC’s. Well done!

At 6th level, the class receives an ability that is too strong for the level – it allows a vindicator to heal or harm the living or undead, regardless of whether she channels positive or negative energy. Do you know how hard clerics usually have to struggle to get this level of flexibility? Yeah. Ouch. The 18th level ability does show that there’s something odd here: ” At 18th level, when the holy vindicator channels energy, she can choose to heal or harm all types of creatures, regardless of what type of energy she channels. This is in addition to her previous options.” Does that mean choosing for each creature separately? the ability doesn’t say and if not, it does nothing the 6th level ability doesn’t already do. A rephrase would be in order here. Versatile channel is btw. gained at 12th level.

Conversely, adding immediate action doom to criticals/as retribution for crits feels comparatively tame, as does the 14th level death knell and the capstone bestow curse. Here, we once again have the alignment-issue in my book – these spell-like hi/retribution tricks feel pretty much nasty to me, so a more good-feeling option would have been appreciated. Adding bonus damage, sickened and bleed to channel smites while bleeding from the stigmata is damn cool, as is adding said power to their channels.

The class comes with FCOs for the core-races and the Polkan-race as well as with the traditional level 1, 5, 10 and 15-sample NPC-builds, once again with a solid narrative backing them up. The sample NPCs use d10 instead of d12 as HD, though. The math of upgrading the HP properly isn’t hard, but still, a minor glitch.

Editing and formatting are good, I noticed no bad glitches apart from the HD-guffaw. Layout adheres to Purple Duck Games’ printer-friendly two-column standard and the pdf comes fully bookmarked and sans art apart from the cover.

Carl Cramér’s Holy Vindicator is surprisingly good – really, I enjoyed this take on what amounts to an alternate paladin-ish class with a tighter focus on channel energy. The stigmata are cool and the tie-in with the blood-themed abilities has been well-conserved. That being said, I would have loved for a tighter ability-integration/more stigmata-synergy. The full channel progression and high HD feel like a bit much, though not to the point where it would be unbalancing. I would have wished for tighter wording regarding the good/evil-dichotomy and a more varied array of options here – some way to render the rather unfocused PrC more organic. This is by no means a bad installment of the series, but it is also one that could have easily went for the full 5 stars + seal, were it just a tad more brave in its modifications of the base-PrC. As provided, I will settle on a final verdict of 3.5 stars, rounded down to 3 for the purpose of this platform.

You can get this Prestige Archetype here on OBS and here on d20pfsd.com’s shop!