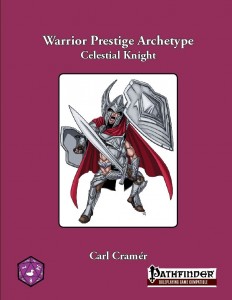 The Celestial Knight is based on the PrC of the same name with parent classes cavalier and ranger. The class receives full BAB-progression, good fort-saves , d10, 4+Int skills per level and the class must be within one step of the patron deity. The Celestial Knight receives full armor and weapon proficiency (light, medium, heavy armor + shields and simple and martial weapons). 1st level celestial knights receive favored enemy as well as tactician. 2nd level celestial knights may choose from a list of defensively-themed bonus feats and learn an additional feat every 4 levels thereafter. 2nd level celestial knights may also add half their favored enemy bonus to saves versus spells and effects of the favored enemy. 3rd level celestial knights receive +1/3 class level as bonus to AC and CMD versus undead and at 4th level and every 4 levels thereafter, we’re in for a bonus teamwork-feat. At 7th level, these guys treat AoOs versus undead and against spellcasters when casting necromancy/evil-spells not as counting against the limit per round. Powerful, but specific enough.

9th level celestial knights becomes even more adept at thwarting necromancy/death-spells andundead spellcasters expecially will be afraid of these guys – against them, the knights receive Disruptive and Spellbreaker. Yeah. Ouch. AT 13th level, these guys may dispel aforementioned spell effects as part of their melee attacks, with a caster level equal to total character level – interesting choice not to go for class level here, but in this case, I’m okay with it. 17th level celestial knights may force concentration rerolls and as a capstone, they may 1/day as a swift action for 1 minute go into super-form, receiving a blinding shield, a cloak of resistance+5 (in addition to other properties!) and turning the sword wielded as if subject to the holy sword spell. Interesting super-form capstone.

Alternate celestial knights may instead focus on aberrations, fey, outsiders etc., coming with their own associated spell schools. The pdf comes with solid FCOs for the core-races and the dhosari and we end the pdf with a sample NPC build for levels 1, 5, 10 and 15

Carl Cramér’s Celestial Knight doesn’t have an easy heritage – I don’t particularly like anti-x-classes when they’re too geared towards stamping out a specific type of foe. That being said, mechanically, the celestial knight prestige archetype does a pretty good job at representing the hunter of necromancers/undead casters and tackling a lich or the like with one of these guys will be at least slightly less frightening. The defensive focus and teamwork/spell-sabotage combination of options renders the celestial knight a pretty solid anti-caster class, though definitely one that would have benefited from either a way to improve saves or for quicker movement – after all, what use is an anti-caster brute that can’t catch up to the caster? Now I am aware that this would have went beyond the design-intent of this installment, but I still feel it would have benefited the class. As written, this is a solid entry in the series and well worth a final verdict of 3.5 stars, rounded up to 4 for the solid craftsmanship and the relatively good conversion of an utterly bland base PrC. Kudos!