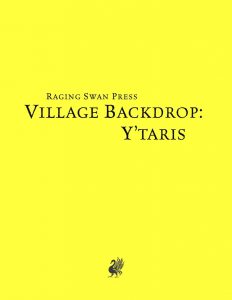 Y’taris is a village born of convenience: In the bleak and desolate harshness of the Broken mountains, there is a stone circle crafted as a silent witness to the confluence of ley lines here; a nexus of power that brings pilgrims galore to these desolate shores. Here, angles have fought, fey have roamed, apocalyptic cults have tried to enact their genocidal fantasies…and right now, another type of ill has befallen the place, namely that of being basically the fantasy-equivalent of a cut-throat tourist trap.

One Ayred Guilespire is in charge of nearly all stalls in the Grey Market, a boil-covered disgusting gnome runs the taverns and a dwarven lady coordinates the pickpockets. That would be the rulers here. Yeah, this is not a nice place.

I mentioned that this was not a nice place, right? well, there’s a lich nearby. Who supposedly gets a stream of fresh corpses from the village. Yeah…Anyways, the village does come with the by now traditional nomenclature entries, notes on local dressing habits and appearances and, as always, 6 rumors and 6 events are neat and the latter even sport a unique little hazard – in the system-neutral version, the fire damage here does not allow for a save, mind you. It should also be noted that the place’s taverns etc. come with notes on costs of drinks – and one, interestingly, even has a brawling fine. No complaints here about a lack of thieving stats in a less reputable inn this time around – this is the system-neutral version, after all.

Being a remote place, it is magic that makes the village work – once again providing a nice angle to develop as a GM. Oh, and much like real life tourist traps, there is an arcane system of fines in place, guaranteed to infuriate the PCs.

Beyond the obvious power of the confluence, there is also an even more powerful, less known place of dark might here and they say that you can even purchase corpses and similar necromancy supplies here…if you know where to look.

Jeff Gomez’ Y’taris is an amazing idea -I really like the magical tourism angle and the execution per se is nice. However, at the same time, it fell short for me. There is ample adventuring potential, but if the place is such a powerful destination, why does no one clean it up? Where are the remnants of ages long past, the unique local effects? In a system-neutral version, sky’s pretty much the limit and you can just hint at something and then have the GM look for the fitting effect, but this one, like its PFRPG-version…boils down to a VERY lame CL-bonus and a tiny chance of not using a spell slot while casting inside the circle. That’s really, really lame and the effect of the “hidden”, lesser-known power-nexus is also not too interesting. Less mechanics, more imagination would have been appropriate for the system-neutral version in particular.

Considering the vast potential and flavor of this place, I can’t really see anyone traveling here for the meager benefits the sights provide. Let me make that clear – this does have its benefits; it’s not a bad installment by any means…but it feels, to me, like it falls short of what it could have easily been. In this iteration, rules are less important, which is why it receives 4 stars – it’s good, but not excellent.