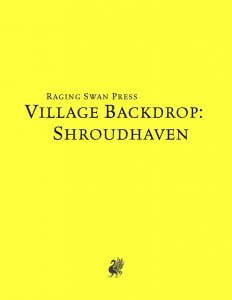 Shroudhaven is a foreboding place – nestled within a valley that is defined by not having seen proper sunlight due to the eponymous shroud above the village, the place greets travelers with signs proclaiming that law-breakers will be eaten and that necromancers are forbidden around here. Yeah, you probably can see where that goes, right? Indeed, beyond mannerisms and exquisite artisanship that could hearken to the genesis of the place, with the famed theater mellavious, the place seems affluent and culturally more than relevant – and it does feature a ghast population. And vampires. Yeah, this place can be dangerous…though the undead do try to put visitors at ease and ultimately convince them of their civilized nature.

The local undead do hunt for “feral undead” beyond the village’s confines, though, as some research can unearth, we find out that locals have a hard time leaving the place…they are subject to a wasting disease until they return. As always, we do receive notes on appearance and dressing style, though this time around, we do not receive sample names. However, 6 rumors and events provide further adventuring potential, in case an eccentric vampire wizard seeking to synthesize artificial blood, a ghast-run manor-house-come-in. And yes, there are farms, courtesy of restricted daylight spells, a cathedral and the relative affluence is pretty much evident. It should be noted that the system-neutral version of this village replaces the settlement statblock and the magic item marketplace-section with a piece of artwork.

Speaking of farms, ghasts and vampires…know how the undead here require sustenance? Well, there is another type of farm. Yes, it includes the nightmarish combination of words “chemically” and “lobotomized.” And yeah, any semblance of civility and culture here is skin-thick at best; sure, you don’t eat intelligent people…but let’s not talk about people made deliberately non-intelligent. Urgh. Similarly, the curse of the place has special conditions – ones that allow for semi-regular (once a decade) explorations beyond the confines of the place. After all, the place may have sucky weather – but there are so many distinguished people here! Have I mentioned that they sell magic mushrooms here?

Mike Welham’s Shroudhaven reminded me of the classic horror-movie/satire “Society”, as seen through a feudal/pseudo-Victorian filter of decadence and manners. The write-ups of the NPCs themselves paint a sympathetic and even kind picture…and honestly, the horrific aspect here lies in the fact that shroudhaven may well be the kindest possible solution for the undead persons; so can you really blame them? Don’t they have a right to exist? Beyond the veneer of polite society, beyond the horror that you can or cannot emphasize, shroudhaven is an uncommon village that generates questions and responses – whether it’s finding shelter, a solution…or involves copious amounts of kindling and pitchforks.

This is an engaging village and an exercise in concise writing -while I have seen the angle been done before, I have never seen it done in this concise and unique a way, with a focus on the leitmotif of consumption – cultural and literal. The system-neutral version purges the respective references in a concise manner, though it should be noted that owning one iteration very much suffices: GMs that already have the PFRPG-version don’t miss out on anything here. In the system-neutral version, I can’t complain about wanting a mechanically-relevant curse, which is why my final verdict for the system-neutral version will clock in at 5 stars + seal of approval.

You can get the system neutral version of the village here on OBS!