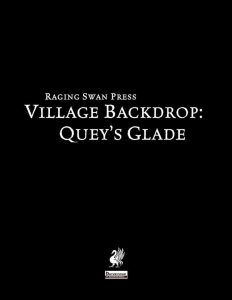 As always, the dressing habits of villagers and notes on village lore can be found for PCs of a more scholarly bent; for PCs seeking to socialize, there are 6 different whispers and rumors to encounter. It should also be noted that we get a fully fleshed out market-place section, and, suffice to say, a proper settlement statblock for this strange place.

There is another aspect to this sanctuary: As progress marches on and fell entities are deprived of their prey, the places where Quey’s Glade may draw upon are slowly diminished, one by one. Then again, this place in wondrous in the best of ways: Have I mentioned the awakened porcupine fighter?

While this is amazing for all systems, in particularly for rules-dense pathfinder, this also sports an additional, really cool role: Know how the passage of time is subjective here? Well, this is a GREAT way to justify e.g. higher-level characters using Everyman Gaming’s Childhood Adventures-rules…or, you know, a way to make kid-characters, whose players have outgrown them, catch up with their real-life players, become adults – all without requiring that the GM retool impending dooms, invasions or similar, time-relevant components. In short, this can literally be a linchpin to hang a truly transformative event upon!

Even in the ridiculously amazing Village Backdrop-series, this is an outstanding offering. My final verdict will be 5 stars + seal of approval, given sans hesitation.