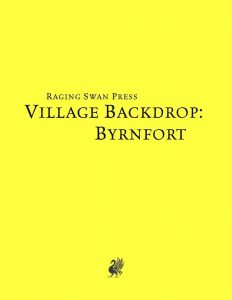 Huh. When I posted the latest Village Backdrop-review in my attempt to catch up with the series, I noticed that, while I had access to this village’s files, I never actually downloaded them or wrote a review. Weird. Anyways, since I am a completionist and pretty OCD regarding the like, here we go!

Byrnfort’s pdf clocks in at 11 pages, 1 page front cover, 2 pages of advertisement, 1 page editorial/ToC, 1 page back cover, leaving us with 6 pages of content, so let’s take a look!

Byrnfort is situated in the ancient Barainwood, and its frontier-status in a hostile wilderness becomes immediately apparent to anyone who sees it: With thick walls of timber and sharp stakes encircling the village (lavishly mapped by Maciej Zagorski), it is obvious that this place, hunched and somewhat claustrophobic, is a refuge from the horrors out there – but not necessarily one that can withstand all that is out there. More a fortification that a village in the traditional sense, the local dressing habits and “industry” mirror this reality, and so do the community leaders, who hearken to the nature-themed side of things. Important for purists – the classes referenced by the NPCs include thief and wizard, so if you’re one of the folks firmly in the magic-user section, this may be a very minor aesthetic gripe.

The system neutral version, alas, does not gain a marketplace section, which is a minor bummer. and, As always, village lore for smart PCs to unearth as well as 6 sample whispers and rumors can be found. The local inn, the Stout Draught gets its own little notes on the price of food and accommodation. Cool: There is a charhouse, which fabricates specialized alchemical coals, three of which are provided. These include one that potentially helps with poison at the cost of being sickened, which can mean different things, depending on your system – just stating “can’t act” or “halves movement” or something like that would have been more elegant here.

Still, I really like how flavor and mechanics are married here. The events do hint at something more going on here, and indeed, there is a secret society of sorts, the Green men – who have a pact with a rather deadly fey ghost. As such, they are obligated to conduct strange rites, of which 6 are provided, adding further flavor.

Editing and formatting are very good, I noticed no serious glitches. Layout adheres to Raging Swan Press’ elegant 2-column b/w-standard and the cartography, as always, is excellent. The pdf comes in two versions, one optimized for screen use and one for the printer. They are both fully bookmarked for your convenience.

My apologies to author Amber Underwood for missing this nice village previously; Byrnfort has a cool, almost Twin Peaks-y vibe going on, and the emphasis on coal and the like is a seldom seen or developed aspect in villages, which adds a sense of authenticity to the village. The rites are really cool and further add local color to the place. The absence of the marketplace section and not 100% perfect conversion of the alchemical coal represent very minor detriments for this version of the pdf, but not enough to cost it the well-deserved 5 stars for a rather cool little settlement.

You can diretcly support Raging Swan Press here on patreon!