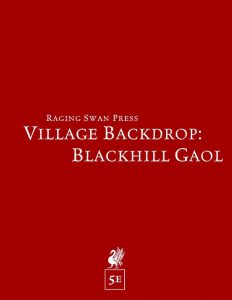 If you’d be thinking that the revolt resulted in a type of anarchist utopia, you’d be sorely mistaken – the leaders of factions have been vying for control ever since, making Blackhill Gaol a dangerous spot to visit. The 5e-version does not include a proper marketplace section.

As always, the supplement does include information on local nomenclature and dressing habits alongside several whispers and rumors – one of them mentioning that the well’s been poisoned, which, alas, remains a non-sequitur. It’d had been nice to have this represented mechanically as well. Most buildings once were conjoined cellblocks, and the pdf mentions an “DC 30 Open Lock“ in an obvious PFRPG remnant. One of the healing potions that may be purchased here also still follows the PFRPG nomenclature.

A significant plus, as always, would be the section that provides 20 different entries on local dressing and events, as these act as an easy way for the GM to introduce some action and local color to the proceedings. As a supplement very much driven by factions, the place does come with 7 sample NPCs, all of which are presented in the fluff-only type that we’ve come to expect from the series – i.e. they note background, mannerisms and personality traits. They also come with a bit of read-aloud text depicting the NPC, and information on class/race/etc. if applicable; in the 5e-version, the pdf references the default NPC-statblocks.

Jacob W. Michaels’ Blackhill Gaol is a per se cool supplement – with a clocktower and the cellblock angle, it has a unique atmosphere to it, one I genuinely consider to be fun. I’d have loved to see a bit more in the goods-department or sample prices for services rendered, but that is nothing that a good GM can’t provide. The 5e-version has a bit less meat on its bones than the PFRPG-iteration, and feels slightly rushed, particularly considering how few crunchy bits may be found herein. As such, my final verdict will clock in at 4 stars for this version.

You can directly support me here on patreon.