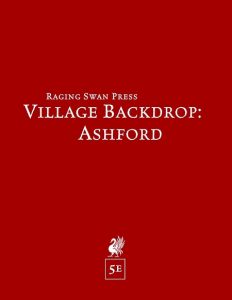 This installment in Raging Swan’s Village backdrop-series, converted to 5e, is 11 pages long, 1 page front cover, 2 pages of advertisement, 1 page editorial, 1 page ToC, 1 page SRD and 1 page back cover, leaving us with a total of 5 pages of content for the village of Ashford, so let’s take a look!

Ashford may once have been a place brimming with the quiet, simple life of small towns – but no longer. Reduced to a shadow of its former state, Ashford is ravaged by the bubonic plague and the empty shells of houses stand among sad remnants that are inhabited by survivors of the plague – people with broken spirits and no hope, waiting solemnly to join their deceased friends and family in an early grave – or drowning their sorrows in alcohol. Visitors risk exposure on a daily basis.

The village priest has failed to contain the plague and so hatred, rage and despair abound, as plague pits filled with the corpses of the fallen litter the landscape and the local ruler ignores his citizen’s plight. The local wizard met the interruption of her studies with a fireball into the enraged mob and no help is coming on that front either. Worse, one of the village’s priests not only succumbed to the plague, but hasn’t been interred in the chapel, thrown instead into plague pits and now has risen from the grave, seeking revenge as a ghoulish priest. Events in the village center on enhancing this sense of desolation and collapsing buildings and feral dogs paint in thick strokes an image of anguish and end-times-like circumstances.

Sidebars depicting abandoned and burnt-out houses (10 entries each) and whispers and rumors as well as lore should help render the trip to Ashford…well. Interesting. That being said, regarding teh 5-conversion, I honestly believe that we could have used game effects. Unlike Pathfinder, 5e has, at least to my knowledge, no mechanics for it yet and I found myself wishing that they were include. While symptoms and the like are part of the pdf, the actual game-mechanics are left out. As always, I believe that certain classes, backgrounds etc. should have an easier time unearthing lore information…but by now, you’re probably tired of hearing that old spiel.

Editing and formatting are top-notch, I didn’t notice any glitches. Layout adheres to RSP’s 2-column b/w-standard with neat b/w-art and as always, the high-res map is available to supporters of Raging Swan Press’ patreon. The cartography of the village is top-notch and the pdf comes fully bookmarked and in two different versions, one optimized for screen-use and one for the printer.

Mastermind of Raging Swan press Creighton Broadhurst is a master of depicting dreary, gritty, grimy locales with concise writing and vivid prose – and this pdf is no different. Indeed, if anything, it is a prime example of what can be done with a scant few words – supplemented by a glorious map in b/w, Ashford is a town you want to include into your campaign, evoking a sense of ending that doesn’t need a scream, but comes with an oh so much more powerful whisper – there’s no villain to be fought, no monster to be defeated to make all well – this is an exercise in combating human nature, a chance for the PCs to make a point that the “g” in their alignment is not about killing things with “e” in their alignment – here’s a chance to rekindle hope against all odds, combat despair and try to save not lives, but a town’s very soul. We need more supplements like this and while reading it, I was constantly wishing for a true plague-outbreak module or even better, an AP in that vein. I have always loved Ashford and considered it to be one of my favorite village backdrops of all time; but alas, in spite of this, the fact remains: Ashford is DEFINED by the plague. It’s literally the point of the village…and it has no effects contained herein. The pdf had the chance to make the bubonic plague for 5e, and instead opted for fluff-only, depriving the village of its mechanical heart, if you will. This renders Ashford’s 5e-iteration, unfortunately, somewhat inferior to PFRPG’s take on it. My final verdict, in spite of loving its writing to bits, will hence, “only” clock in at 4 stars.

You can directly support Raging Swan Press here by joining their patreon!