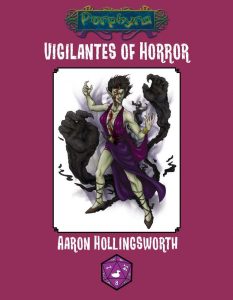 This installment of class-options in Purple Duck Games series clocks in at 18 pages, 1 page front cover, 1 page editorial, 1 page SRD, leaving us with 15 pages of content, so let’s take a look!

So, first of all – all archetypes herein share a certain leitmotif, namely that they employ the classic Jekyll/Hyde dichotomy, classifying the vigilante identity as something monstrous; as this transformation is more than the application of make-up etc., e.g. hats of disguise (not properly italicized, in a nitpick – as a whole, I noticed a few instances of spell references etc. that should be italicized) do not hasten the procedure; the monstrous vigilante identity may not be good and as such, a good character changing into it must succeed a Will-save, mirroring to a degree Jekyll’s struggle. This holds true for all vigilantes of horror and thus, this modification of Dual Identity precedes the following archetypes.

All righty, so what do the archetypes offer? The corpseborn, basically the Frankenstein#s monster-equivalent, replaces vigilante specialization with jolting nerves, usable 1/day +1/day at every odd level thereafter. This makes his eyes glow and allows for the addition of 3 + character level (oddly, not class level) on any one d20 roll as an immediate action. This should imho be tied to class levels and sport a proper bonus type– RAW, the massive boost is very dippable. 2nd level makes the character count as Large for the purposes of Intimidate and combat maneuver checks instead of that level’s vigilante talent and 6th level provides electricity resistance 5, which increases by +5 every 6 levels thereafter, replacing 6th level’s vigilante talent. 12th level’s vigilante talent is replaced with immunity to bleeding damage as well as +10 to Heal checks to treat the corpseborn. At 18th level, the corpseborn can execute a 1/day, potentially lethal save-or-die attack. Personally, I think massive damage would make sense instead and while I like how it is flavored, with electricity damage on a successful save, I think that immunity to electricity should probably render immune against it. On an aesthetic hiccup – the ability is called “Act of Revenge” and the internal text calls it “revenge attack” – not a bad glitch, mind you.

The second archetype herein would be the loup garou, who is moon-influenced and thus gains +2 to initiative Knowledge (geography), Perception, Stealth and Survival, increasing the bonus +by +1 at 5th level and every 5 levels thereafter. He also treats all terrain as favored terrain while outdoors and above ground, but not submerged in water. Thankfully, this does not stack with favored terrain, but it can yield some potent combinations when interacting with abilities that only work in favored terrain. This replaces the vigilante specialization. 2nd level yields a bite, 4th claw attacks (properly codified!! YES!), both instead of vigilante talents. 6th level yields +2 to Will-saves while in vigilante identity, +1 every 6 levels thereafter. 12th level provides DR 10/silver, which increases by +5 every 4 levels thereafter and 18th level nets at-will locate creature.

The mummified replaces the specialization with entangler, which is basically a Charisma-based SP entangle with a 30 ft.-range. First, affecting only one target, + an additional target at 3rd level and every odd level thereafter. Again, I think that ought to be class levels, but I may be wrong here. 2nd level provides a +2 bonus to saves versus disease, death effects and poisons that increases by +1 at 8th level , 12th and 18th level. 6th level provides a 25% chance to ignore crits and precision damage etc., stacking with light fortification, but not heavy fortification – both of which are not italicized.12th level yields a mummy’s despair aura, usable for class level + Charisma modifier rounds per day and thankfully, with a 24-hour caveat and proper activation action– kudos there! 18th level nets a nice curse.

Podling vigilantes nets a Will-save penalizing pollen/spore aura that increases in potency at 5th level and every 5 levels after that– and thankfully comes with a means to immunize fellow adventurers. 2nd level yields a thorn body-equivalent ability, usable for class level round per day and 6th level provides at-will tree shape, with 12th level providing plant shape I, which upgrades to II and III at 14th and 16th level, respectively. 18th level yields the ability to generate low-CR plant creatures…which is pretty cool! Reeflings get increasing non-lethal bonus damage when using unarmed strikes versus grappled foes and better grappling capabilities as well as the means to carry around heavy loads unimpeded, making for a solid abductor angle. 2nd level provides swim speed equal to land speed and +4 Stealth (should be capitalized) while swimming. 6th level yields properly codified claws….that should mention that the nonlethal bonus damage can be inflicted with them – RAW, unarmed attacks =/= natural attacks. 12th level provides +1 natural armor bonus with accompanying keen armor spikes, and 18th level nets water breathing as well as deep dweller.

The vampiryst vigilante can suck blood from helpless/pinned/etc. targets to heal and/or gain temporary hit points – with a cap AND the important caveat that prevents abuse of the ability via a bag of kittens – kudos! The archetype is also extremely adept at throwing off suspicion regarding the alternate identity and is treated as undead in vigilante identity – solid modification of seamless guise.2nd level yields a properly codified bite attack and 6th level, your choice of either claw or slam attacks – properly codified, once more. 12th level yields DR 3/silver and magic and cold resistance, both of which increases at 16th and 20th level. 18th level yields beast shape II and the ability to communicate with the children of the night. Finally, the vanished may, at 2nd level, duplicate invisibility for class level + Charisma modifier rounds, but also becomes slightly insane while vanished thus, taking a -2 penalty to Will-saves. 6th level provides the character’s choice of always ghost touch, SPs or a deflection bonus to AC while invisible and 12th level upgrades the invisibility to greater invisibility, but also increases the Will-penalty. At 18th level, entering invisibility also is accompanied by a constant rage. And yes, this guy does not trade in the vigilante specialization, just fyi

This is only where the pdf starts, though: 9 social talents include undead nobility (mindless undead don’t attack you, unless commanded), gaining a willing victim (love interest, Igor… with all 10 ability scores), easier means of purchasing mundane items (though they are fragile), etc. – these are flavorful and make sense. The pdf’s main meat, apart from the aforementioned archetypes, however, would be the massive list of vigilante talents: From being able to properly yield absurd weaponry (lethal damage via non-lethal weapons, +1 damage for improvised weapons), 1/day Jason-style short-range teleport (not italicized properly…)…oh, and torturing helpless victims to deal ability damage and confuse them, aquatic adaption, vomiting acid splash, burrowing…what about corpseborn vigilantes gaining electrical spikes? Yeah, there are some gems here…but admittedly also some filler talents à la”+1 to CMD”. That being said, I absolutely ADORE the ability to 1/week choose a sensation like a smell, a sound – you know the like. All creatures within 10 miles get that sensation, subtly alerting them to your presence. While an activation action would have been nice, seeing how it is more of a NPC/flavor ability, chances are you won’t use it in battle…or would you? You see, it makes for a potent alarm-system, so yeah…activation action would have been nice: Though Su would make me assume standard, immediate would make more sense to me. Gliding capes, better grappling via tentacles/vines/bandages, better Escape Artist via temporarily taking off a limb – there are some real gems here that fit perfectly with the themes. What about adding silence to the appearance-based angles? Oh, and there would be the talent that lets you eat two types of organs from a corpse to heal ability damage or remove negative conditions…

Really neat: The pdf sports 20 sample vendettas, basically in-character goals that fit with the horror vigilante-theme. The final page is devoted to new magic items, all of which are situated in the upper power/price echelon: Coffin Armor for the discerning, traveling vampire. The noose of strangulation, a really potent killer-whip….the razor-glove of the dreamslayer (cue Freddy…) and more…these items rock and end the pdf on a high note. The pdf also comes with a bonus-file, penned by Mark Gedak, one depicting Augustus Silvermane, a CR 6 aasimar rook.

Editing and formatting re very good on a formal level; on a rules-language level, the pdf has a couple of hiccups and oversights, but the formatting in particular is the most inconsistent part here – both regarding italicizations and class vs. character level, there are a couple of glitches that do influence the rules-integrity of the pdf. Layout adheres to Purple Duck Games’ two-column standard and is pretty printer-friendly, with only purple highlights. The pdf has neat full-color artworks inside and comes fully bookmarked for your convenience.

I am a sucker for the classic horror monsters. There, I said it. I read them all. I wrote papers about them. I GM’d Ravenloft for the better part of my adult life. As such, it should come as no surprise that I’m really, really enjoying this pdf – and if you’re like me, you’ll probably feel the same. As a GM toolkit or as a file for someone looking for a more morally ambiguous vigilante experience steeped in the classics of Gothic Horror, well, this is for you.

At the same time, one could also make a good point for Aaron hollingworth’s pdf falling short of the excellence it could have achieved – the hiccups in the rules-language do accumulate, to the point where min-maxy players can get some problematic combos out of dipping….issues that could have easily been prevented. My second gripe with the pdf would be that the vigilante talents sport some filler that made me question why it’s there in the first place – apart from min-maxing number-boosts.

That being said, the pdf does contain some gems and the aforementioned issues do not require much GM skill to handle; as a whole, this does have sufficient rules-integrity to use as written. Still, as much as I love a lot of the tricks herein, the glitches do drag this down a notch – my final verdict will hence clock in at 3.5 stars, rounded up due to in dubio pro reo – well worth checking out if you like the idea, in spite of the rough edges.

You can get this cool, if not perfect pdf here on OBS!