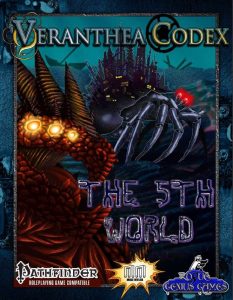 This high-level adventure for the unique Veranthea Codex-setting clocks in at 62 pages, 1 page front cover, 1 page editorial, 1 page SRD, 3 pages of advertisement, 1 page back cover, leaving us with 55 pages of content, so let’s take a look!

Okay, this module is intended for HIGH level characters; as in level 16 – 18. Don’t have some on your hands, much less with the global rules modifications of Veranthea? Well, fret not, for the pdf does contain a significant array of high-level pregens for your convenience. Furthermore, the pdf does contain a massive selection of high-level stats for adversaries/NPCs that can be found in the world of Veranthea, acting as a kind of NPC Codex-like book, but including brief notes on the fluff of the respective NPCs as well. And yes, we also receive stats for Yawvil, the CR 37/MR 10 master wizard of Veranthea…after all, the module begins with meeting him.

Now, if all of that does sound familiar, there’s a reason for that: The module reproduces a lot of content that could be found in other Veranthea Codex books. This means that, yes, you can run this module sans needing to get the whole product line. Here’s the good news for those of us who enjoyed the setting so far and DO own the books: With a proof of purchase sent to the Veranthea e-mail address (which can be found in the product description of the module), you actually get a discount on the book! That is really customer-friendly and gets two big thumbs up from yours truly!

But you’re here for the adventure, right? Well, as always, the following discussion of the module at hand will contain SPOILERS. Potential players should jump to the conclusion.

All right, still here? Great! The PCs are teleported to none other than Veranthea’s master wizard, for his long-time ally Tyrigilyam the jabberwocky (do you get the easter-egg?) has gone missing in the Forever Dark below the surface; it’s up to the PCs to find out what…and here, the massive array of super-powerful adversaries I mentioned before comes into play: mentally compelled by a strange pulse, these legends stand in the way of the PCs as they make their way to a skein of energy that holds back to the Manhoff trench in the Doryhanna Ocean and best the horribly potent things lurking there. Sooner or later, the PCs witness basically a strange machinery that can be traced along the ocean floor, a massive outcropping of metal, itself shielded from the hostile environment – Ðëñùšä, an underwater city.

Infiltrating the massive place at the bottom of the seas, the PCs encounter powerful crustacean-constructs…and fans of Veranthea will guess that the gig is up: They have stumbled over relics of the dreaded Trekth. Within this strange city, the PCs may find Yawvil’s old friend, bound by the strange things – and freeing the jabberwocky may also free the mind-controlled legends from their strange compulsions…just as Yawvil and the jabberwocky reconcile, the whole power of the tick-like city (oh yeah, didn’t mention that, did I?) resurges as the massive trekth forces seek to overrun everyone – with the help of the legends freed, the PCs may have a chance to escape – but they need to carve a path through the horrid creatures here, as the city itself seems to be capable of even blocking Yawvil’s potent tokens, which were supposed to get the PCs out of exactly this predicament…And yes, the PCs can leave behind the controlled legends, potentially changing the power-dynamics of Veranthea forever…talking about high stakes!

Editing and formatting are very good, I noticed no undue accumulation of hiccups. Layout adheres to Veranthea’s 2-column full-color standard and manages to get A LOT of information on a given page. The pdf comes with solid full-color artworks, most of which will be familiar for fans of Veranthea. The cartography deserves special mention – two maps are provided, one that is somewhat battle mat style and solid, and a full-color map of the fantastic city/being Ðëñùšä. The latter is particularly nice.

Mike Myler’s high-level adventure does everything right. It does not get bogged down in trying to micro-manage the vast capabilities of PCs of this level, instead presenting environments that require high-level arsenals of options to survive. The unique backdrop of the proceeding is compelling, in spite of its brevity, and the way in which the module employs the legends of Veranthea is really smart, potentially allowing for vast global changes in the aftermath of this module. There is but one serious complaint I have regarding the module – its brevity. While the high-level legends allow a GM to stretch this module SIGNIFICANTLY if desired, the module can similarly be rushed for convention-slot length. And honestly, in my book, the module deserves better than that. This features some of the best properties of Mike’s writing style and is, idea-wise, incredibly strong – so strong, in fact, that I wished that this had been upgraded to full-blown mega-adventure status…you know, with NPCs across Veranthea vanishing suddenly, the aftermath of these disappearances, the climactic involvement of Yawvil, a longer trip through the incredibly hostile terrains passed…you get the idea. This almost feels like a whole campaign arc.

That being said: A) Nothing keeps you from expanding the module thus. B) I *get* why the module is as it is – it is deliberately designed to work for one-shots etc. Consider, thus, my complaints to be a testament to how cool this module is. Hence, my final verdict will clock in at 5 stars, just short of my seal of approval – highly recommended if you’re looking for a unique, far-out high-level challenge!

You can get this unique, cool high-level module here on OBS!