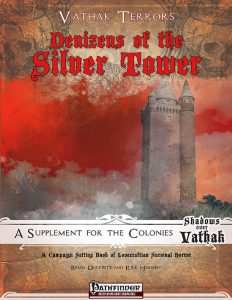 The supplement begins with a brief, one-page run-down of the Silver Tower noted in the title, sketching the environment and noting some sample denizens that can be found within, taking creatures of up to Bestiary 6 into account. While no terrain features or concrete details are provided, this at least provides a nice contextualization for the creatures to come.

The first of these would be the CR 7 Riven, a plant that had me shudder and flash back in aesthetics to a certain game – a pair of humanoid legs splits to a body of a vast maw with a leaf-like interior and lashing vines. With grabbing bites, paralytic vines and the ability to consume identities of those it eats, as well as pheromones and the ability to blend into new environments, these lavishly-illustrated plants (kudos for the twisted full-color artwork!) made me flash back to the forgotten Dreamcast title D2 in the best of ways. Cool nightmare fodder!

At CR 12, skrianix are 4-armed aberrations of a vaguely insectile bent, making for horrid meat-grinders in close combat – but they are more than that. They have an acidic saliva and, when exposed to other acid (saliva doesn’t count…unless you’re a sadistic GM like I am and ignore this explicitly stated caveat…), they split. Like a frickin’ ooze. Yeah. Creepy as all hell. Yes, their defenses actually mean you won’t easily tear through them.

The final creature herein would be the zworoam swarm – at CR 4, we have a swarm of jelly-like flying creatures can engulf targets, hampering their movement…and turn acidic. Yes, you can basically use these to temporarily lock down escaping/fleeing PCs, while the big bad guys draw near… I know I’ll be using them, concept-wise beyond the borders of the system and extensively, particularly in modules like LotFP’s “The God That Crawls.” (Review forthcoming!)

Editing and formatting are very good on a formal and rules-language level. Layout is as beautiful as we’ve come to expect from Vathak supplements and the three full-color artworks provided for the monsters are amazing – and I haven’t seen them before. Considering the fair asking price, that’s a big plus indeed! Speaking of which: In spite of the brevity of the file, it’s fully bookmarked! Kudos!

Brian Duckwitz’ monsters are…surprisingly amazing. I mean it. I got this pretty much on a whim, since I wanted to show support for the criminally-underrated Vathak product line of Fat Goblin Games, and I was pleasantly surprised to find the monsters within engaging, fitting regarding the horror-tones of the setting, and mechanically challenging to face. I do have to say that I had hoped for the eponymous Silver Tower as a general framing environment to perhaps sport a sample hazard or a bit more context for the critters, though. Now, granted, none of the monsters reinvent the wheel, but this costs 1 buck. As in: One Dollar. The creatures herein are definitely worth more than this. My final verdict will clock in at 4.5 stars, rounded up due to the great bang for buck ratio.