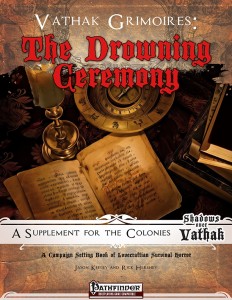 This supplement clocks in at 11 pages, 1 page front cover, 1 page editorial, 1 page ToC, 1 page SRD, leaving us with 7 pages of content, so what do we get here?

Well, we get a brief fluffy introduction and then, the content provided within the dread pages of the eponymous grimoire, which doubles as a depicted level 15 universalist spell book. As a preparation ritual, the caster can elect to take wisdom damage to gain +2 caster level checks per damage taken.

So, what can the unique spells do?

-Drowning Gaze: High-level spell that allows for a gaze that inflicts drowning while focused on a character. Powerful, but okay at this level.

-Hydrophilia: This spell must be cast in sight of a body of water, which then proceeds to attract the target – go into the water… Like it.

-Stinging Water: Scorching ray-clone that deals 1d6 less damage, but inflicts 1 point of con-damage instead, which can be negated with a save. Should specify the damage type it inflicts; Untyped is too strong. Bludgeoning would be the default, I think. Other than that, I’m fine with this.

-Summon Void Parasites: Has a layout glitch that puts the header at the very bottom of the previous page; summons a rot grub swarm reskinned towards being an outsider…which would generally be a cool idea. HOWEVER, outsiders have different racial traits etc. than vermin, so just slapping the outsider-type on a rot grub swarm does NOT work. We need stats, which renders this…nonfunctional.

-Temporal Surge: Okay, this spell has a good idea – it allows you to perform additional actions and makes you take damage for them, which scales up fast and hard. The spell also gets it right to prevent means of evading the damage. The thing is – the spell-level, even at level 6, is too low for the number of creatures it affects and the damage is ridiculously low – you can outheal this with cohorts…easily. Note that this spell breaks the action economy for potentially a whole adventurer party, acting as a huge amplifier in power. The idea is good, the execution not bad, but oh boy, this spell is very, very broken. Even as a personal spell, it would be too strong, arguably in certain situations, it is stronger than time stop. This thing needs to be torn down and redesigned from the ground up.

-Tentacle Growth: Has a layout glitch that puts the header at the very bottom of the previous page; Grants you slots for holding items and also provides a reflexive disarm.

-Throes of Terror: Level 8 spell that lets you burst into outsider tick swarms (same stat-complaint as above applies) with disease quality. Your body reforms when you’ve drained enough Con to equal your own score. Cool idea!

The pdf also sports two new feats – Flux Spell, which adds +2 spell levels and allows you to roll numerical effects (but not saves or opposed rolls) twice. The second one would be Molting Spell – at +1 spell level, this one is pretty cool: It increases the numerical effects of a multi-round spanning spell by +50% in the first round, but reduces them to the normal level for half the duration thereafter, then decreasing the effects by 50%, mirroring a theme of degenerating power in rules. I do love this concept, though the wording could be slightly more concise – the intent is clear and the feat functional, though.

Editing and formatting are good on a formal level, though the aforementioned layout-hiccups with spell-names are annoying. Layout adheres to a gorgeous two-column full-color standard and the pdf comes fully bookmarked for your convenience. The full-color artworks provided are awesome, as we’ve come to expect from fat Goblin Games.

Jason Keeley’s Drowning Ceremony is an interesting offering – some of the spells herein are pretty awesome, inspired even and the general concept of the series is cool. However, at the same time, there are massive balance-concerns with one spell that pretty much redefines BROKEN, some spells feel a bit filler-ish…and honestly, this supplement left me a bit disappointed – why? Because we don’t actually get the drowning ceremony. We get a spellbook and crunch, but a good grimoire, in my book (haha), requires more. With a name and concept this evocative, where is the awesome, dark background story, the lore-checks to research it, where is the slow corruption that comes from using it? The theme and topic are so evocative, but apart from an all-too-brief introduction, the book, to me, remained less of an unique entity, more like a series of thematically-linked crunch. Especially in the context of horror, it is not the mechanics that work alone – the fluff is of tantamount importance and here, this is the second flaw of this pdf; I honestly believe that LESS spells (kill the uninspired variants…), but some unique fluff instead would have really helped this book come into its own. As provided, this remains the quintessential mixed bag, falling short of its awesome premise. Don’t get me wrong, this isn’t bad, but it could have easily been awesome. My final verdict will clock in at 2.5 stars, rounded up to 3, because the good concepts do deserve to be acknowledged..

You can get this inexpensive supplement here on OBS and here on d20pfsrd.com’s shop!
Endzeitgeist out.