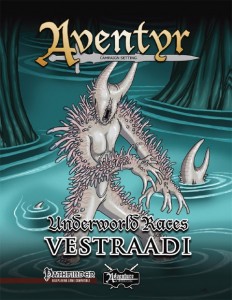 This installment of the Underworld Races-series clocks in at 19 pages, 1 page front cover, 1 page editorial, 1 page ToC, 1 page SRD, 1 page back cover, leaving us with 14 pages of content, so let’s take a look!

As has become the tradition with this series, we open with the extensive history of cataclysmic events that have shaped the unique underworld of Aventyr before we delve into the unique fluff and description of the new race featured herein – now those fleshy tendrils on the sides of Oxolotls, the ones that make them look a bit like Mudkips? Now think of a white, humanoid, massive creature with those things all over the body, a slightly lopsided, sickle-shaped head and three-fingered, multi-digit hands and you have the nightmare fuel that is the appearance of the mysterious vestraadi. And yes, I am not going to spoil the few tidbits about them shared herein in the racial history – mainly because there is more mechanical ground to cover than in just about any Underworld race-book so far.

Vestraadi receive +4 to Wis, +2 to Con, -2 Cha, are aberrations, have a land speed of 20 ft. and a swim speed of 30 ft. blindsight 40 ft in water, 5 ft on land, scent, are constantly under detect poison, have a cold resistance 5, can breathe air and water, always treat Stealth and Perception as class skills – and they are Blind. As such, they may be immune to gaze attacks and sight-based illusions, but also are susceptible to sound-based effects and illusions due to their acute hearing. Now usually, I’d be complaining about the +4 Wis here – but unless you use the following rules, the vestraadi only receive +2 here.

What rules? Well, fans of daredevil may be familiar with the sonar idea – well, that’s exactly how the vestraadi see the world. Unless suppressed, they constantly ping their environments, thus perceiving other vestraadi and their environments (though they can suppress this for hiding etc.) – this has a range of 240 ft. – moving objects are harder to fix – the vestraadi can designate character level + Wis-mod to automatically identify. Whenever a vestraadi’s turn hits, the aberration may detect creatures in 30 ft range with a Perception-check versus 10 + size modifier + Stealth-check or the object’s attribute modifier (e.g. Str-mod for thrown weapons) – the vestraadi gains blindsense against such targets, but on a 1, something goes wrong. As a swift action, a vestraadi may make a second such roll at +2 to Perception against targets he can blindsense – if successful, they are treated as being seen via blindsight until the beginning of the vestraadi’s next turn. Against objects not so perceived, the vestraadi is treated as flat-footed, with the range increasing over the levels. The higher the level of the vestraadi, the more additional effects are added – from detect magic at 5th level to arcane sight at 20th level. The downside is apparent – the detect-effects may knock them out as per the default rules of the spells, so that constitutes a design flaw in my book. Soooo…this looks clunky, doesn’t it? Lot of rolling? Complex? Yeah, it honestly kind of is – however, at the same time, I playtested this system and in the hands of a capable player, the delay is minimal – and renders the playing experience utterly unique – the vestraadi play like no other race I’ve ever played or DM’d for – they at once are superb in the perceptions and utterly sucky. They are truly unique and I applaud the race for making this work!

The FCOs of the Vestraadi are interesting -from granting mounts swim speeds to some dark tapestry-ish themed options, the feel well-balanced and partially even innovative. From corals that help scent-based navigation to slime that makes weapons harder to disarm, the mundane items are neat.

Racial feats include 3+Wis-mod rounds discern lies, detecting diseases, +4 dodge versus attacks not perceived via sonar, +1 AC versus attacks perceived by it, nigh perfect sound mimicry or significantly boosted intimidate-effects – unique bonuses and thankfully none that render the whole raison d’être of the race ad absurdum. The magic items provided, which include a bow that allows the wielder to project his perception to the point of impact, greasing boots and deadly whips, can be generally considered well-crafted and unique as well – but relatively powerful.

Now among the spells, I am not sold – an immunity-ignoring 2nd level charm, for example, is not gonna happen in my game, with the same holding true for the even worse greater version. A level 4/5 AoE spell that deals CL x d8, max 10d8 30 ft. burst damage AND decreases movement in the area by 20 ft AND penalizes ranged attacks by -8 is too much. A spell that weaponizes the tendrils on their bodies also does not work as intended and generates utter confusion – they make autonomous AoOs as if they had Combat Reflexes – but what if you have the feat? Do they stack? Do you have to perceive the targets? Can both you and your tendrils execute an AOO versus the same target? If your tendrils drop a foe prone, can you execute an AoO against him? This spell is a mess.

Finally, we are introduced to the Vestraadi Argus racial paragon class – at 5 levels, these watchers receive +3 BAB, fort and ref-saves, + will-saves and increase their sonar range by up to 100 ft. The class nets d8, 4+Int skills and proficiency with the whip. The class also increases scent-range, provides for limited perception-rerolls, 3+wis-mod deathwatch and arcane sight per day and later can see through solid material, even metal up to a certain thickness. The capstone also nets 3/day true seeing. An okay watchman-class, I guess.

Editing and formatting are good, I noticed no significant glitches beyond the minor bolding issues. Layout adheres to AAW Games’ two-column full-color standard for the Underworld Races-series and the pdf comes fully bookmarked and with copious amounts of gorgeous, original full-color artwork.

The Vestraadi are one of the most innovative races I’ve seen for Pathfinder – I have literally never seen a race attempt anything like it and that makes it inherently awesome to some extent to me. Mike Myler’s sonar mechanics are honestly much better than I expected them to be and in playtest, the vestraadi played utterly, stunningly unique – literally a different experience from ANY race out there. Now yes, a player must REALLY know the perception, scent, blindsense and blindsight-rules by hard, otherwise it bogs down gameplay…but if that is ensured, these guys rock incredibly hard.

While I LOATHE the detect effects, their overloads also need to be addressed and some of the supplemental content, quite frankly, requires a nerfing/rebalancing. However, I still urge you to check this out – it is the most unique race I’ve seen in ages and when cleaned up, it has the potential to become one of my all-time favorites – consider this a seal-of-approval-in-waiting. As provided, the pdf is still flawed. And yes, the paragon PrC isn’t *that* impressive beyond being the ultimate detector. But still – the vestraadi are a glorious race that, once this pdf’s rough edges have been polished off, will take their place as one of my all-time favorites. And yes, I’m going to scavenge the hell out of the sonar (daredevil ninjas, anyone?), replace the detect effects with something more to my liking…and cackle with glee. It should also be noted, that a fellow, blind gamer was involved in the creation of the sonar-rules and quite frankly, I really, really like how this mechanic provides a totally unique experience that deserves to be added to one’s game.

I’m postponing the verdict. Why? Because, quite frankly, with the flaws, I should rate this down to 3. I can’t. I love it too much. I have always rewarded imaginative creativity over mechanical perfection and thus, my final verdict will clock in at 3.5 stars, rounded up to 4.

You can get this exceedingly unique and inspired race here on OBS!