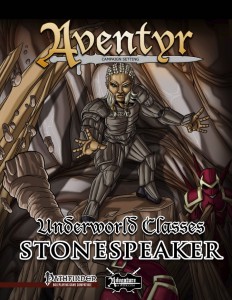 This installment of the Underworld Classes-series clocks in at 18 pages, 1 page front cover, 1 page editorial, 1 page ToC, 1 page SRD, 1 page back cover, leaving us with 13 pages of content, so let’s take a look!

Stonespeakers are a new 20-level base-class that receives d8, 4+Int skills per level, proficiency with simple weapons, flails, hammers and picks as well as light and medium armors and shields. They also receive 3/4 BAB-progression and good Fort- and Will-save progressions. They also receive so-called secrets of the stone, beginning with 2 level 1 secrets at first level, increasing the maximum level available by 1 at 4th level and every three level thereafter to a maximum of level 6 at 16th level. The amount of secrets also increases by +1 in such intervals, up to a maximum of 8 known at 19th level. What are these? Well, I’ll get back to that in a bit.

First, let’s take a look at the defining SU of the class, the exploding earth ability – which does pretty much what you’d expect: It causes the ground to explode, dealing damage to a creature on it (or up to 5 feet away). This is a standard action that affects a 5-foot square and a range of close. Damage is equal to 1d6 + wis-mod, with Ref save for 1/2 damage. The ability can be used class level + wis-mod times per day. The base damage increases by +1d6 every stonespeaker level and a stonespeaker may add their level (should be class level) to the damage and increase the DC by +1 per 4 class levels by expending two uses of the ability. 5th level stonespeakers can additionally expend a swift action to add a ranged trip to the effect and at 12th level, expend double the normal uses to extend the area to a 10 ft x 10 ft. square. Notice something? Yeah, this pretty much outperforms alchemist bombs in direct damage, but not inflexibility.

At 2nd level, the class receives tremorsense that scales from 10 ft. at 2nd level up to 60 ft. and is locked into favored terrain (underground), gaining half the bonus in hills/mountains/plane of earth. At 3rd level, the class receives 25% ignore crits and precision damage, not stacking with fortification, but scaling up to 50% (9th) and 75% (15th level), also receiving immunity to petrification and bleed/blood drain.

Now as for the stone lore – at 1st level, 3rd level and every 4 levels thereafter, the class receives one of its talents, 12 of which are provided – oddly, not in alphabetical sequence. The talents themselves tend to have minor scaling effects, with e.g. stone armor netting a bonus to AC and also, at higher levels DR. Channel energy, but only affecting earth elemental creatures, earth glide…you get the idea. Throwing save-less exploding earth-charged pebbles that require a ranged touch instead is where the damage-comparison falls pretty much apart – the class, with one talent, can vastly outperform an alchemist’s damage output and even choose whether to go by save or by touch attack. Emanation-like bursts of shards also can be executed and yes, adamantine-like attacks at 1st level can be gained here as well. That should DEFINITELY have a minimum level cap – the 1/day restriction (scaling) is not enough in my book. Better craft using stone feels pretty much underwhelming when compared to these tricks, showing a discrepancy in the internal balancing of the class. Also odd: A lore that nets stability as well as imp/greater trip at 5th/10th level, both of which look pretty late in comparison. Conversely, 1/day, covering a weapon in massive bleed-causing obsidian flakes may be damn cool, imagery-wise, but also much weaker than some of the other options.

The pdf also sports an alternate earth creature-summoning list as well as two feats – one for +1 stone lore, one for +1 stone secret. The pdf also sports two new spells themed around earthen grips/crushing – mechanically interesting, their potency is based on your grappling capacity, enhanced by spellcasting attribute/full-level substitution. Still, their wording could be slightly more concise. The class has no FCOs.

Editing and formatting are good, though some components of the wording could have been a bit more concise in their explanation/presentation, but that is a minor issue. Layout adheres to AAW Games’ beautiful two-column full-color standard and the pdf sports *A LOT* of gorgeous full color art, though you may know some from the UR-series. The pdf also comes with rudimentary bookmarks – enough to work okay, I guess, but not many. (3, if you have to know…)

Mike Myler and Julian Neale’s Stonespeaker has a pretty awesome imagery going for it, with cool, earth-based tricks and a damage-output that is nothing to sneeze at. And on paper, it looks pretty nasty. Let’s be honest, it is pretty nasty. That being said, the class is also significantly weaker in actual play than one would assume from the arguably impressive damage-numbers. What do I mean by this? Well, yes, these guys can pretty much outperform alchemists regarding bomb-damage etc. – but the cost is steep – significantly less flexibility, no mutagens or extracts… same goes for a comparison with druids and similar classes – the stonespeaker may temporarily outperform them damage-wise, but he can never achieve the level of versatility or crowd control of the aforementioned classes. So yeah, one of the instances that did require some actual playing experience. That being said, the class is not perfect – the spells could use some streamlining and the talents themselves do not feel particularly well balanced regarding the internal consistency of the class – there are quite a few options that simply can’t live up to comparative choices. This does not render the class bad by any means, but it does further streamline the class into a very specific playstyle, when a bit more diversity/different foci for stonespeakers would have helped. As written, the class and its options are very, very linear. Now if you always wanted to play an earth-specialist who really drives home how nasty these guys can be by blowing foes up…well, there you go. My final verdict, mainly due to the lack of flexibility of the class and the rather linear playing experience, will clock in at 3.5 stars, rounded up to 4 by a tiny margin.