Underworld Classes: Masters of the Web

Underworld Classes: Masters of the Web 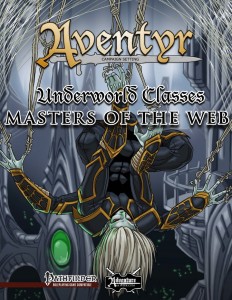 This installment of the Underworld Classes-series clocks in at 17 pages, 1 page front cover, 1 page editorial, 1 page ToC, 1 page SRD, 1 page back cover, leaving us with 12 pages of content, so let’s take a look!

We kick off this pdf with a short flavor text before we are introduced to the mistress of the web rogue archetype. Upon meeting a creature, these rogues may modulate their speech patterns on a successful Linguistics-check to grant them bonuses to social skills when dealing with said target. if she exceeds the DC by a significant amount, these scaling bonuses double. Following the theme, the mistress also receives detect thoughts as an SP. The archetype receives slightly nerfed sneak attack progression and instead of trap sense and two rogue talents, she receives progressively better charm/dominates as SPs that ignore SR – oddly, with the caveat that she needs a shared language, but without specifying that this is a language-based effect. And yes, this extends to suggestions. All in all, a solid femme fatale archetype, I guess, but one that did not blow me away.

The second archetype herein would be the Master of the Web, a Monk archetype. These guys, if they are drow, do not suffer from racial penalties to Intimidate (as per Aventyr’s default rules) and receive a new style via bonus feat (more on that later) – they are also just as adept at insulting adversaries as a certain skull from Planescape Torment. The vitriolic tongue ability represents an intimidate-check opposed by sense motive, granting other creatures a bonus to attacks versus the master, while also penalizing the creature as a move action – the bonuses and action economy scale. Better yet – the pdf acknowledges that the base rule assumptions utilize not a competing thrown, but a fixed DC, allowing you to choose which you prefer. Personally, I think the competing throw-solution just bogs down gameplay and is a 3.X relic that should have been cut, destroyed and burned in the first place.

The space could have been used for something better, namely proper synergy with antagonize – for guess what – they don’t mix. Which is just plain annoying – why? Because the aggro-drawing of the ability is rules-wise pretty concise and synergy with antagonize would have conversely also allow for synergy with Everyman Gaming’s Psychological Combat-pdf…. Oh well. Masters of the Web may also spider climb, gain temporary climb speeds (including massive acrobatics-bonuses. Masters do not receive a ki-pool, but still receive the “treat unarmed strike as x”-ability-suite.

Now want to know what’s pretty awesome? Growing more arms. Up to a total of 6. Off-hand and doesn’t combine with flurry…but yeah – cool! At 7th level, masters also receive the web universal monster ability, increasing the range at higher levels. Oh, and 12th level, they can expend web-uses to execute unarmed attacks at range, including flurry synergy. Things become even cooler – whirlwind attack versus all foes in reach + 5/10/15/20/25/30 ft.? (These scale and take lunge into account!) Yeah, the ability is complex, but oh so cool. Speaking with spiders and an apotheosis at high level fall behind this one in sheer terms of coolness.

The pdf also sports 4 feats, all of which lack their descriptors (Style, Combat, etc.) – the style allows you to retain dex while flat-footed, but does not prevent sneak attacks. The Webbed Warrior allows you to execute ranged combat maneuvers via your web ability, glue weapons to your arms to have them return to you, etc. The other two feats net you more webs or tremorsense -at a level, where it is not unbalancing. The complex archetype does sport a handy 1-page table of ability-changes for your convenience.

Editing and formatting are good, though some of the abilities could have been a bit more concise in their explanation/presentation, but that is a minor issue. Layout adheres to AAW Games’ beautiful two-column full-color standard and the pdf sports *A LOT* of gorgeous full color art. The pdf also comes with rudimentary bookmarks – enough to work okay, I guess.

Mike Myler and Julian Neale deliver two archetypes herein – the first of which may be okay, but it takes one of the weakest classes in the game and makes it not necessarily better. The Mistress is simply not that great. That out of the way: Have you read Spiderman comics for any slightly significant period of time? Well, do you remember bizarro-spiderman-doppelgänger, the flesh-eating, 6-armed monstrosity that accompanied demo-goblin and joined the rampage of maximum carnage? Well, the Master of the Web is *THAT* guy, the Class. Well, mixed with the original Spidey’s quips. And yes, the spidersense, ranged netclumps, net-inferno – all there, and much more concise in their presentation that one would expect.

And yes, this pdf has some minor editing hiccups, some things that could have been streamlined and yes, the first archetype is pretty much boring. Know what? I don’t care. This spidey-archetype has me cackle with glee at the nice implementation of one of the concepts I always wanted to see. If you EVER wanted a spiderman class, this is essentially the must-have file to get, especially at level 7+, the archetype blooms into full-blown coolness. My final verdict, in spite of the minor hiccups, just has to take this absolute awesomeness into account – my final verdict will hence clock in at 4 stars and must-buy recommendation for fans of Spidey.

You can get these neat archetypes here on OBS!
Endzeitgeist out.