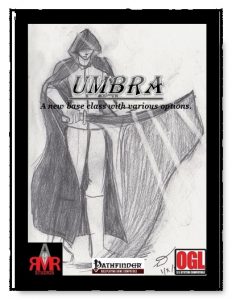 This base class clocks in at 10 pages, 1 page front cover, 1 page editorial, 3 pages of SRD, 1 page back cover, leaving us with 4 pages of content, so let’s take a look!

The umbra class presented herein receives d8 HD, 6 + Int-mod skills per level, 3/4 BAB-progression, good Ref- and Will-saves and proficiency with simple weapons as well as hand crossbow, rapier, sword cane (nice!), shortsword, kukri, starknife and (composite) shortbows as well as light armor and bucklers. The class also nets 30 ft. darkvision and low-light vision at first level, which makes it too dippable from the get-go, even before the other options, but that just as an aside. Darkvision increases to 60 ft and 120 ft. at 6th and 11th level, respectively, with 17th level providing see in darkness.

The umbra begins play with a shadowcraft pool equal to class level + Wisdom modifier (the pdf annoyingly uses the three letter attribute shorthand in an unnecessary formatting deviation),a pool that replenishes at midnight, just fyi. The pool is used to power the so-called shadowmancies, SPs, of which the umbra has one at the start and learns an additional one at 3rd level and every 3 levels thereafter, with save DCs clocking in at the traditional 10 + 1/2 class level + Wis-mod for them, if applicable. Basically, we have point-based casting of an extremely limited list with a shadow-theme here. A plus, formatting-wise: Spells are properly italicized. Nice.

The class also gets shadowstrike- the option to attack an adversary’s shadow to inflict damage: in order to do so, the umbra must focus on a shadow as a move action (dismissal also takes a move action), with duration of the focus being 1 minute or until the creature is slain. While thus focused, the umbra receives -2 to AC, Perception and attacks versus creatures that are not the target of his focus, but the class does deal an additional +1d4 damage, +1d4 at 4th level and every 3 levels thereafter against a target of the focus. Nitpick: The ability makes this damage behave as precision damage, but could be slightly more precise here. Still, this is nitpicking – the ability per se is interesting.

Starting at 2nd level, the umbra may generate shadow bolts to target creatures affected by the focus – this is a ranged touch attack that provokes AoOs and inflicts 1d4 untyped damage, +1d4 at 5th level and every 3 levels thereafter and the ability is treated as a spell of 1/2 class level -1 – and such a bolt costs one shadowcraft pool. Starting at 7th level, umbras deal + 1/2 class level damage versus flat-footed foes (+ class level at 14th level) and regains 1 shadowcraft point when doing so. Hand me the bag of kittens to slaughter, please.

15th level nets hide in plain sight and 17th level allows for the combination of shadowbolt and shadowstrike, with 20th level providing a sufficiently powerful insta-kill attack. The three feats allow for a larger shadowcraft pool, more shadowmancies or a decreased point cost for one. The class comes with favored class options for drow, fetchling and dhampir.

Editing and formatting are good on a formal level. On a rules-formatting and presentation level, there are a couple of deviations from the standard to be found. Layout adheres to a two-column b/w-standard and the pdf has no bookmarks, but needs none at this length.

Angel “ARMR” Miranda’s Umbra is per se an interesting construct – the focus-based infinite challenge-y alternative to sneak attack deserves further scrutiny for its potential. At the same time, the class feels a bit confused in what it wants to do: On one hand, he have the alibi-level restricted flexibility of shadowmancies and the very few options that provides; on the other, we have the pseudo-warlock-y blasting. And then, thirdly, the aforementioned sneak alternative. And none of the 3 come together particularly well. Unlike in comparable classes, the engine-components do not feel like part of a whole and exist, for the most part, separate from one another.

There are a precious few interactions, but as a whole, this feels like three parts of potentially cool classes, forced to inhabit a single chassis. I believe that all three, to a degree, could have carried a class with varying success, but their combination here feels like less than the sum of its parts….somewhat disparate, if you will. This does not make the class a trainwreck or anything, but it also means that, even with the PWYW-bonus, that this is far, far off from the amazing ethermagic, Path of Shadows of similar offerings out there.

In the end, even with the PWYW-bonus, I can’t go higher than 2.5 stars, rounded up for this one.If you’re looking for design-inspiration or for the shadowstrike-chassis to build on, then this is still worth downloading and leaving a tip for, though.