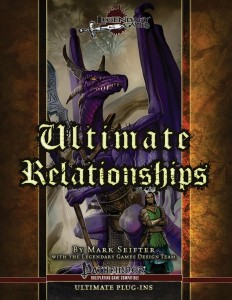 We’ve all been there – a key-NPC just is more interesting to the players than a given module anticipated – whether as for romantic interests or just for the purpose of being buddies, the social component of interaction between characters is pretty much a component often neglected in PFRPG. Now this pdf provides a concise, no-frills base system to track how players and NPCs interact with one another. Basically, relationships are codified in 10 ranks, with rank 4, 7 and 10 being milestones. the default rank is 0, with 1 representing a basic alliance. Much like what happens behind the scenes with videogames from Mass Effect to The Walking Dead, these relationships are codified via the tracking of camaraderie points.

When a PC acts in concordance with a specific NPC, the PC gets 1 – 2 camaraderie points, with contrary actions potentially decreasing relationships. Whenever a PC levels up, he can assign 2 camaraderie points to assign to an NPC to represent the PC spending extra time with that NPC. Camaraderie starts at 0 for each new rank, but ranks are NOT lost due to camaraderie-loss – instead, the PC suffers a penalty according to negative camaraderie points. The higher the rank, the more camaraderie points one requires to rank up. Once the PC has accumulated enough camaraderie points to rank up, a talk is required, potentially also requiring a skill check or more. Failing to rank up does provide bonuses to future checks, so, much like in the Persona games, your relationships will not stagnate. Finally, there would be the component of affinities – essentially a representation on how a character interacts with a PC depending on diverse circumstances: A xenophobic dwarf may, for example, be a tough nut to crack for your elven character, while other dwarves find establishing a connection easier.

There also are so-called milestones (on the nit-picky side – the first reference to them points towards page XX, instead of the correct page-number) – one can determine these via providing about 5 per AP-book, with each providing different qualities of the interactions and gifts via a solid table of DCs – craftsmanship and repetition of such acts determine the target DC of these interactions to get camaraderie points. Rivalries are also covered in these contexts. A PC with a campaign-specific trait begins with a chosen NPC at rank 2, with +2 points towards rank 3.

Ranks achieved also net the PC XP-rewards and additionally, NPCs and PCs may actually end up with tangible, rules-relevant benefits from better relationships. Now one central flaw of this system, as much as I like it, remains the AP-focus: Both Base required Camaraderie to Rank Up and Milestone-frequency are not provided in a general system for DMs, but in one that is based on the progress in the 6-book-sequence of APs – if you instead homebrew or run a megamodule, you’ll have to do the adaptation yourself without much guidelines, limiting unduly the generally awesome base array of rules.

Editing and formatting are very good, though not perfect. Layout adheres to legendary Games’ beautiful full-color two-column standard and the pdf comes fully bookmarked for your convenience. The pdf provides a solid array of nice full-color artworks.

Mark Seifter’s relationship system per se is absolutely awesome and at 2 bucks, very affordable to boot. At the same time, I do believe it falls short of its own potential – at this length, I did not expect fully fleshed out relationships herein, but I do believe that this pdf would have didactically benefited from one or two sample relationships to illustrate the system in game. This is the nitpick-category of complaining. What does keep this system from reaching my highest verdicts, though, would be the insistence of tying it to 6-book-structure of APs makes the system less versatile than it should be.

Why not tie it to character levels in relation to when an NPC is introduced in character progression instead? The result would be infinitely more usable and ultimately make it possible to use the system easily beyond the limited scope of running APs. Why this option was not used, I cannot fathom, but it remains the one detriment of an otherwise neat system. My final verdict hence will clock in at 4 stars.