Treasury of the Orient

Treasury of the Orient 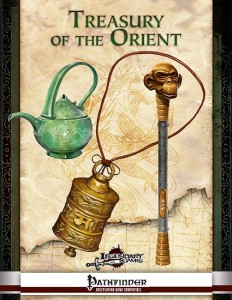 All right, so the items featured herein, as depicted on the handy table in the beginning span the range from humble 30 gp alchemical items to 180K gold (and one artifact) – but what kind of items do we actually get?

Well, the first one would be kokowai, a protective salve that supposedly wards off demons and temporarily nets the user the stench-quality. There are two magical armors herein and both are truly interesting: The first would be the Bestial Haramaki – a spellstoring armor – when bull’s strength, cat’s grace or bear’s endurance is stored, the armor provides the bonus of the spell for an extended period while it stores it – nice expansion of the base concept! The second armor would be unraveling silks, allowing the wearer to turn into threads as a move action to duplicate gaseous form with a climb speed instead and prevent lethal falls. Evocative imagery, neat modifications of abilities – that#s how it’s done!

A total of 7 specific magic weapons are part of the deal as well: The first of these is the beheading blade, and O-M-G, is it glorious: A flying blade that can be unhooked from its chain to be used at range, returning to the user, with abilities like dancing being powered by ki…absolutely awesome and best of all: The tight wording manages to get the complex mechanics just right. Two thumbs up! Or what about a katana that, upon a critical hit, generates a spray of razor-sharp cherry blossoms? Yes, this is evocative imagery with awesome mechanics. (Yes, you can designate squares to exclude so your allies aren’t cut to ribbons…). There is also a cursed katana that cannot be sheathed unless you’ve crited an opponent or reduced him to 0 hp or below, though, alas, the lack of HD-restrictions here means you can bag-of-kitten-cheese the curse, which is an unnecessary oversight in my book. Another bow allows you to forego damage to instead make an incorporeal creature laugh (and unable to act for 3 rounds), allowing the user to pinpoint the target – this would be pretty OP sans its limitations, but with them, the bow works. A keen flying blade sans penalties, a katana that increases in power when pitted against overwhelming odds and a fan that can generate a nonlethal damage-dealing line of wind that knocks foes prone complement this section of the pdf for an overall, nifty arsenal.

The cane of butterflies allows the owner to disguise himself as older/younger and benefit from threefold aspect as well as conjure forth a massive, hampering swarm of butterflies. The rod of the monkey king can assume the shape of different weapons and extend at command, with concise rules regarding the extended reach and its rules-interactions, while the rod of shadow puppetry allows the wielder to paralyze foes whose shadow was touched and then direct such creatures to do his bidding – interesting and once again, evocative imagery. However, at the same time, Touching the creature’s shadow” is pretty wobbly as far as design tenets are concerned – while this is nothing a good GM can’t handle, e.g. playing with light-sources etc. can pretty much radically change how this works and the range, so some guidance for less experienced GMs would have been appreciated for this item.

There is also a truly diverse selection of wondrous items in this book: There is a circlet crafted from the horn of imperial dragons that fortifies the wearer against fear and activate a frightful presence that scales with Cha and level in potency, while expenditure of ki can extend this effect – however, the circlet also amkes the wearer subject to easier control by imperial dragons, so beware! There are also clothes that can adapt to surroundings, duplicating different styles of nonmagical outfits, a feathered map that provides quicker rests and the evocative concept of ghost food is also represented in this book. A magical inkset allows the user to hide special messages in the art he creates and there is also a damn cool kapstan that can store ki and, provided a threshold is met, then allows creatures with ki pools to command the ship to which it has been added to move. Additionally, this item allows the user to command the ship to use ki to try to evade missiles, obstacles etc. – all in all, a glorious item.

The kimono of honored ancestors allows the user to ask the spirits of old for advice, while the koto of ki shards can duplicate an array of spells…but is powered by Perform, with scaling difficulties…and instead of its charges, users may have ki power the effects. Cool blending here! A rather nasty skull emitting cursed vapors and a bowl that produces a meditative hum can also be considered to be rather inspired, if less complex items. The Monkey’s head charm is visuals-wise all awesome: You throw it at foes for damage…and potentially command it to erupt in eerie laughter, which penalizes foes and renders them even flatfooted, with a chance to cause spellblights…However, the item states that Will can negate the effects, but not the DC – I assume the same as for the spellblight, but I’m not sure.

There is also a massive array of shapechanging-themed noh masks, covering the base beast shapes as well as vermin shape, giant form and form of the dragon – and yes, they take daily use ability abuse is prevented – kudos for catching that! A magical papercraft sheet, a prayer scroll amulet that protects against the undead (and can soak up negative levels) and a fire-themed robe as well as an enchanted samisen are next – and the latter is particularly cool, since it has an alternate use when utilizing downtime rules, generating 7 labor a day that must be immediately spend (and can thus not be hoarded)- cool! A variant dragon-form-granting lungguang and a flute that renders targets ethereal (and subject to the wrath of spirits) as well as a sugegasa that can turn into a raft complement this section.

Pretty cool idea: There are three magical tea-pots in this book, all working by casting one of three spells into the pot while preparing a tea ceremony; all sporting three different effects for those partaking in the tea ceremony. These items are cool and can’t be cheesed, but I do believe the pdf should specify just how many people exactly can partake in such a tea ceremony. I assume an army couldn’t, for example, but RAW, we have alas, no guidance for this.

Obviously, the pdf also offers full stats for the White Peacock Crown, which is a rather awesome item, just fyi. The artifact, in comparison, is a bit of a let-down, being basically a mallet that can provide miracles that don’t require diamond dust. Yeah…wasn’t impressed by that one.

Editing and formatting are very good, though not as streamlined as in some Legendary Games-supplements – I noticed italicization-glitches here and there and rules-language-wise, there are a couple of minor, yet noticeable hiccups. Layout adheres to the elegant, nice, two-column full-color standard of Jade Regent plug-ins and the pdf sports a blend of previously seen and new full-color artworks of a rather high quality. The pdf comes fully bookmarked for your convenience, with a rather nice little typo “magucal teapots” – does have an interesting ring, doesn’t it?

Alexander Augunas, Tim Hitchcock, Jason Nelson and Victoria Jaczko have crafted, content-wise, one of my absolute favorites among the treasury-pdfs by Legendary Games – there is literally no filler in this little book and even items that are based on spells in a can modify the effect in unique ways. The items universally are evocative, though some of them have minor rough edges – which is understandable, considering that they tackle rather complex concepts and do their very best to be interesting. With the surprising exception of the artifact, they actually succeed in this endeavor and can be considered inspired. The rating, however, is a bit tricky – you see, the rough edges do mean I can’t rate this the clean 5 stars I’d like to grant – however, at the same time, I’d rather have the rough edges and awesomeness than bland perfection -hence, I arrived at a final verdict of 4.5 stars, rounded down to 4, but will still add my seal of approval to this pdf for its intriguing arsenal of unique items. Highly recommended!

You can get these inspired items here on OBS!