Treasury of the Kingdom

Treasury of the Kingdom 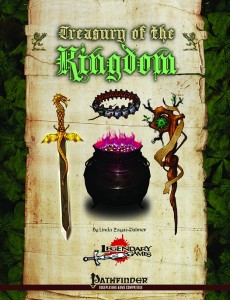 This collection of magic items, intended primarily for use in the Kingmaker AP, clocks in at 20 pages, 1 page front cover, 1 page editorial, 1 page ToC, 1 page SRD, 2 pages how-to-use/introduction, 1 page advertisement, 1 page back cover, leaving us with 12 pages of raw magic items, so let’s take a look, shall we?

As has become the tradition in Legendary Games’ item-books, this one begins with a handy list of items by price-point, this time running the gamut from 200 gp to artifact-level. The pdf begins with a new tower shield that not only allows the respective character to assume tree shape or veil as a tree…and the item can also deflect deadly ranged attacks. Among the new weaponry, there is a mace that can have a spiritual ally skull detach from the mace to attack foes with flaming bites. Additionally, if wielded by a creature with regeneration, defeating foes may render the regeneration unsurpressable. The Falling Star starknife can be split into multiple blades to execute full attacks with the returning blade. Survivalist’s arrows can be used to pinpoint freshwater sources while in the field and the item also offers a slightly enhanced damage-output.

Gorum’s greatsword is not only made from adamantine, it also gains a charge whenever the wielder vanquishes a foe with HD equal to or more. The charges can accumulate to a threshold of up to 5, with the wielder having the option to expend these charges in AoE debuffs. Summoned creatures can btw. not be used to power the blade. The war-trident of the lizard king can be considered an intriguing berserker-style weapon. The new ring in this pdf lets the wearer consume fear, gaining fast healing when subjected to fear and provides temporary hit points when damaging enemies. 3 variants of feytouched summoning rods allow the wielders to call forth interesting creatures with modified, more powerful tricks. The Scepter of Forgotten Time is more interesting in my book – the scepter allows for the selective application of both slow and haste via one cast and the scepter can also has the option to hurtle target creatures into the future. The social-skills enhancing Staff of the Fey Queen is solid, I guess, but I’m not blown away.

The pdf also provides a selection of new wondrous items, one of which is absolutely awesome – it conjures forth a spectral army of warriors – alas, the pdf does not specify the army’s ACR or hit points, which is a bit of an annoying oversight. A beast shape II-duplicating talisman is okay. I do like a special fabric that erupts into deadly acidic bursts and trail-falsifying boots. Bottled dancing lights that may generate fear from those of weak will. The crown of affirmation is interesting – it can modify memory and generally ensure a lessened dissent with several abilities, extending the benefits granted to the kingdom-building rules. Personally, I get the notion behind these benefits, but I do believe that creating yay-sayers may actually destabilize a nation in the long-run, so more dynamic benefits would have made more sense to me – in fact, I could see an abuse doing the opposite, potentially increasing unrest…but that may just be me.

The nat 1-reroll-granting monocle has a nice imagery, though the benefits per se are not that interesting and the same can probably be said about a dragon statue, which nets minor bonuses to be used at one time when it’s covered in blood – solid imagery, but rules-wise a bit bland. Chokers made from mummified rats that allow you the ability to steal water breathing from foes…now that is interesting! The dryad’s wreath and faerie swarm-summoning flute, once again, while pretty nice, though I really do not get why the swarm conjured not simply has a statblock – as provided, it is a variant of the bat swarm and requires switching between the item and the swarm’s entry. a ring that can sprout a dance-inducing fairy-circle is pretty intriguing and playful and a powerful, offensive frock that utilizes barbs and flame makes for a nice item. Pick-pocket-enhancing gloves are okay, I guess – switching item from glove to glove, as long as they’re within 30 ft., can net a solid trick or two to an otherwise conservative item.

The pdf also provides the hag’s eye-item-class – these can be used to modify potions in thoroughly intriguing ways. While the imagery here didn’t wow me, the actual execution did – so kudos! Rulers seeking to further stabilize their kingdom may want to invest in instant signaling towers…though the benefits here feel a bit excessive – for every two of these 5K-costing tower-items, stability vs. monthly destabilizing events increases by +1, which quickly becomes ridiculous at higher sizes – essentially, I believe that tying the items to hexes and/or kingdom size and capping the benefits would have made a lot of sense. As written, I can’t picture these items making an impact in a logical manner.

A bonus-granting map fits well with the exploration-context, berserker powder -okay…but a crop-enhancing plow that can also heal is truly nice, especially since it may spawn spontaneous leshy… Spyglasses, movement-enhancing boots – I get the ideas here and they fit with the theme well, but ultimately, I’m not blown away by them. A centipede that can be deployed as a sense-sharing scout and a magical boggard’s mask complete this section together with a kind-of-improved anti-lycanthropy tonic….the latter of which I do not know: As the pdf remarks, lycanthropy is notoriously difficult to heal. personally, I think it should remain this way. This is a personal preference, though, and will not influence my final verdict.

The pdf also sports two artifacts, the first of which would be the Aeromancer’s Heart – the weightless diamond provides a couple of spells in a can…and before you hiss: If it is brought to the plane of air and restored to full power…well, then it can make a city fly – with all ramifications. Awesome! The second artifact herein would be the fractured phylactery – no, not John Ling’s module by Gaming Paper, I’m simply talking about at-will slow-touch and 3/day enervation. The wielder also behaves as an undead for the purpose of positive/negative energy interaction, gets a slight boost to necromancy CL and, if undead, channel resistance+4. I’m sorry, but this is the most boring artifact I’ve seen in a while.

Editing and formatting are good, though not as refined as in most LG-supplements. Layout adheres to legendary Games’ two-column full-color standard and the pdf sports numerous nice artworks for items. The pdf comes with bookmarks, but only for categories, not for the individual items.

I’ve been pretty much excited to read this pdf – mainly because Linda Zayas-Palmer has had a hand in some of my favorite crunch-designs this year and I wanted to see what she can do on her own – turns out, quite a lot! The items herein, were I to note one basic strength, can be defined as having great imagery that really fits well with Kingmaker, while also making them feel magical – the sense of old world magic suffuses them and makes them fit nice and seamlessly with the AP. On the other hand, quite a few of the items herein feel very conservative to me, quite a few skirting the line of being spells in a can with minor benefits attached. This is particularly strange, since there is ample proof that Linda Zayas-Palmer knows how to make mechanically-compelling items that border on brilliant – there is greatness to be found herein.

Still, as much as I enjoyed some items, not all of them really proved to be intriguing – there are several items I’d only consider interesting by virtue of the imagery they evoke. Perhaps, courtesy to this being her first solo-foray (I know of…), she has opted for a slightly more conservative take…but that’s idle speculation. This remains a good collection of items, but one that falls short of the author’s potential and, at times, of the awesomeness of the imagery. My final verdict will hence clock in at 3.5 stars, rounded up to 4 for the purpose of this platform since this does not deserve being called “average.”

You can get this collection of magic items here on OBS and here on d20pfsrd.com’s shop!