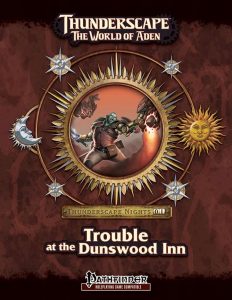 This adventure is intended as an introductory module for Aden, and as such, for 1st level characters. The module does feature read-aloud text and also has a side-bar based option to make the module slightly darker, as befitting of Aden’s flavor.

All right, only GMs around? Great! So, the pretty sizable family of Knut Bjornson has weathered the Darkfall, and Knut’s no-nonsense attitude may have spelled doom: One of his younger sons, Magnus, is an aspiring mechamage, largely self-taught. When bandits arrived, one an arcanist and one a golemoid and Knut refused protection, Magnus snuck out, offering to help the golemoid to keep the family safe and satiate his thirst for knowledge.

The module features 4 scenes: The PCs happen upon a man being attacked by nocturnal fire elementals (fully statted) – unless the PCs intervene, the golemoid is as good as dead. Problematic – the man is ostensibly difficult to move while unconscious, but no weight value is provided, which locks the PCs into seeing Knut and his guards approach – the man offers Magnus’ services. As the PCs accompany the Bjornsons to their stead, they rest…and on the next day, the man has died, to be committed to the pyre. Here’s the thing: Why would the PCs not guard the man from the weird folks that suddenly showed up? The module crumbles apart with even a modicum of PC care, for it is contingent on Magnus removing golemoid components. Whether the golemoid was still alive or not depends on how dark a ton you’d like to evoke.

Magnus, in the meanwhile, has taken off to his bandit buddies – defeating the 3 remaining bandits (fully statted) ends the module.

Editing is tight in all regards, but formatting is not nearly as tight: Italicizations are missed left and right. Layout adheres to a nice two-column full-color standard and the sports a nice artwork that Aden fans will recognize. The pdf has no bookmarks, but doesn’t necessarily need them at this length. The pdf has no cartography or battle maps, which is a problem: Since the description is not exactly precise regarding combat environments, the battles feel opaque. As there are no maps, there also are no player-friendly maps.

Shawn Carman’s brief sidetrek has a good idea, but ends up as a horrible railroad. There is zero player-agenda here, and while the background notes on the NPCs are nice, they have no bearing on the plot. The eponymous Inn is utterly opaque – I have no idea how it looks, how rooms are arranged, etc. The module is also contingent on superbly incompetent players that lack even a modicum of the paranoia that characterizes even journeyman adventurers. In short, while the prose and production values are solid, this does not work. Not even for the low price. I don’t consider this to be a worthwhile introduction or a good adventure. My final verdict will clock in at 2 stars.