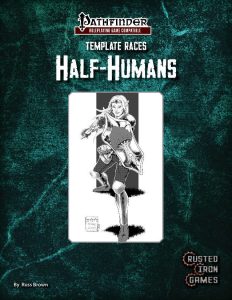 This little pdf clocks in at 7 pages, 1 page front cover, ½ page of SRD, leaving us with 5.5 pages of content, so let’s take a look!

Half-human is an inherited template that can be applied to 0-HD-creatures. It is not intended to be applied to races that already are half-human, obviously. So, the base race’s physical ability score bonuses are reduced by 2. For each bonus thus reduced. You also reduce an ability score penalty by 2: The order of these is Constitution, Dexterity, Strength, Intelligence, Charisma and finally, Wisdom.

Movement rates, speed etc. is retained from the parent races, as are special considerations and/or restrictions imposed on the movement rates. Darkvision and low-light vision are retained from the parent race. Half humans gain the skilled racial trait and also count as humans via the dual heritage. We are taking a look at weapon familiarity, hatred, defensive training, natural armor. Half-humans also gain keen senses, and additional racial traits are lost – half-humans only qualify for alternate racial traits of humans, not those of their parent race. All right, the basic set-up of the template is pretty solid and should result is pretty solid results.

Now there are a ton of racial traits that may result in some potentially confusing set-ups – thankfully, the pdf does believe in showing how these cases can work out: The translation of the half-human android’s exceptional senses from the parent race, for example. Samples for the core races as well as android, drow, nagaji, ghoran and hobgoblin are provided. Now, obviously, the half-human orc is a bit different than the half-orc, but it makes for a decent alternative.

When I saw Russ Brown’s template race approach here was honestly, not something I looked forward to. With the ARG’s RP being notoriously bad at codifying racial strength, I was skeptical on how the pdf would succeed at providing a balanced racial array. Now, with so many different options, it is clearly obvious that the template, system-immanently, can’t account for absolutely everything, but it does account for a truly impressive amount of material. The further guidance by example does help here and, as a whole, the result of applying the template speeds up the creation of half-humans in a concisely-presented manner that is easy to grasp.

In short: This is a surprisingly concise, handy little pdf. This is worth getting and succeeds at its task probably as well as it conceivably can – my final verdict will hence clock in at 4.5 stars, rounded up for the purpose of this platform.

You can get this worthwhile, inexpensive little pdf here on OBS!