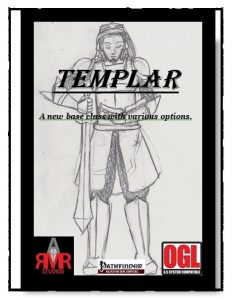 This base class clocks in at 8 pages, 1 page front cover, 1 page editorial, 1 page SRD, 1 page back cover, leaving us with 4 pages for the templar base class.

The templar has d10 HD, 2 + Int-mod (lower cap’d in the pdf) skills per level, full BAB-progression and good Fort- as well as Will-saves. They gain proficiency with all simple and martial weapons as well as all armors and shields, except tower shields. The templar can cast arcane spells gained from the class (and only those) sans arcane spell failure. 4th level nets prepared arcane spellcasting based on Intelligence at -3 levels, with spells drawn from the sorc/wiz-list. As soon as they can cast spells, they may do so with hands full – and here the “only templar spells”-caveat is missing.

The class begins play with at-will detect magic and the option to 1/day chastise another as a swift action, which is basically a variant smite sans the bonus to atk, but with + class level to damage and a -2 penalty for attacking other targets while the ability is in effect. It may be used an additional time per day at 4th level and every 3 levels thereafter, though the ability itself does not spell that out – you need to look at the table to deduce that.

At first level, the templar also pledges an oath – these basically come with flavorful adventuring modifications and provide a passive benefit and an active benefit: These include gaining proficiency with tower shields, Arcane Strike as a bonus feat or an increased spell level of +3 (for full CL). The active benefits interact with chastise and provide e.g. DR, attack bonuses, save bonuses and AC – the standards, all of which scale with the chastise daily use progression. 2nd level provides eldritch hands, which is a temporary hit points granting variant of lay on hands, governed by Int (not properly capitalized in text), with 1/2 class level + Int-mod daily uses and 1d10 + 1/2 class level gained for use. This is upgrades to 2d10 + class level at 14th level.

The temporary hit points last an hour and touching others is a standard action, personal sue a swift action. 3rd level nets a familiar at full progression (WTF?), with 10th level providing Improved Familiar for free. 5th level provides at-will mount, though it can’t be recast until its duration expires, so no mount spamming, which represents a nice catch. This upgrades to phantom steed at 11th level.

6th level and every 3 thereafter net a bonus feat chosen from combat, metamagic, Spell Focus or Spell Mastery or an Arcane Discovery.

Starting at 8th level, as a standard action, the templar can generate a 1-round aura that increases CLs or arcane spells by 1 and their DC similarly by 1, usable 3 + Int-mod times per day. 11th level allows the templar to expend two uses of chastise to grant all allies within 10 feet the ability to chastise, though they need to do so before the templar’s next turn. Sooo, can the chastise once? As often as the templar? Before or after expenditure? Do they deplete his chastise-uses? That one could be more precise. The aura is a bit too opaque. It is upgraded by another +1 and a decreased activation action at 17th level. The capstone makes the templar immune to mundane weapons (Yay at this level?) and allows him to once per chastise double the damage bonus, add a targeted greater dispel magic AND end the chastise, allowing for a flexibility the class could have used sooner.

The pdf sports a feat for +2 chastise uses and the eldritch vindicator, a cold iron bastard sword that becomes more powerful in the hands of a templar…bingo, it’s basically the equivalent of the good ole’ holy avenger etc. It also sports some minor formatting hiccups.

Editing and formatting are decent – the rules-language and formal criteria, for the most part, are solid, if not always perfect. Layout adheres to a printer-friendly two-column b/w-standard and the b/w-artwork’s nice for a PWYW file. The pdf has no bookmarks, but needs none at this length.

The templar by Angel “ARMR” Miranda is a decent take on the arcane paladin – nothing more, nothing less. It is, in short, a pretty basic rules-operation, with the oaths being the one source of player-agenda apart from the spells. The class’s spellcasting engine is pretty brutal, but has to make up for the loss of mercies…which brings me to another point – this is basic and it could have been interesting: Adapting arcane mercies or tapping a substitution ability into the sellcasting instead of going the standard route could have made this guy really interesting. As written, it is a decent take on the trope, though I’ve seen better. On the plus-side, this being PWYW means that you can check it out rather easily and determine whether it’s for you or not. If you need a quick arcane pala class with minor rough edges and sans frills, this may be worth taking a look at. My final verdict will clock in at 2.5 stars, rounded up by virtue of being PWYW.

You can get this class for PWYW here on OBS!