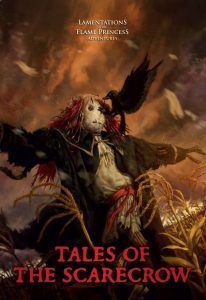 This short roadside-encounter/mini-adventure clocks in at 10 pages, 1 page front cover, 1 page editorial, 1 page back cover, leaving us with 7 pages of content, so let’s take a look!

All right, so this pdf comes with a pretty nice layout that presents some creepy shades in the background; in the pdf, which is layered, these may be turned off. The pdf features nice b/w-cartography, which unfortunately does not feature grids. In a slightly puzzling decision, the layered pdf does have an option to turn on/off grids etc., but this does not influence the keys of the map, meaning, alas, that you can’t make the maps player-friendly. My review is based on the pdf-version, and I do not own the print-version of this booklet.

The old-school ruleset employed within would be the LotFP-rules (lamentations of the Flame Princess), but as always, they allow for pretty easy conversion to other old-school rulesets. As far as level-range is concerned, this is probably best used in conjunction with low- to mid-level PCs; I’d recommend at least 2nd level PCs, unless you’re going for an everyone-dies/becomes insane-Cthulhu-purist-style scenario.

All right, only referees around? So, there is a truly verdant field of corn by the wayside, with a single path leading towards an old and somewhat dilapidated farmstead. If the PCs walk in and investigate (perhaps due to a hook or somesuch), the corn will pretty quickly close ranks; inside the farmstead, a place of horror awaits: Adventurers/relic-hunters have met a truly grisly doom. With the investigation showing even resorting to cannibalism. Among their possessions are three important magical items: The Malleus Deus, a grimoires that allows magic-users to cast cleric spells…and prevent ANY cleric witnessing them doing so from ever casting that spell ever again. Suffice to say, the Vatican has been known to kill pretty much everyone who even knows of the book, much less owns it…

The second artifact would be the sword which is uncertain, which treats all targets as AC 14, but all attack rolls of 16 or 17 strike a random, non-intended target instead for double weapon damage – and if no eligible target is available, the strike is banked for a future attack…this is a devilish angle for a cursed blade. Really cool!

The final item found within would be the grimoires that is known as Tales of the Scarecrow, a horror-anthology, where the PLAYERS get to weave each a brief horror-story of powers pertaining the (otherwise mostly harmless) scarecrow in the fields. Sure, touching it initiates a HP-countdown due to its vile energies, but that’s it. The PC who weaves the best horror story has it come true…and they may not share them or write them to screw over specific characters. Oh, and the PC whose nightmare becomes reality gets an XP-bonus. Cool exercise in fireside-style cooperative narration here!

…but, you know, there are more issues here. You see, in the corn, there are tentacles. There is a Great Old One-class huge monster below the corn, which is responsible for the fecundity of the field. It is limited in how many tentacles it can send forth and how it can consume victims, but it basically represents one horrific mousetrap to escape from (No, flight is not the instant-win-card…) even before the player’s tales are woven into the scenario. Oh, and between dangerous parasites and a thoroughly traumatized survivor, a super-unwieldy harpsichord would make for an amazing treasure that would yield an excellent price…but how to get it out?

Editing and formatting are very good on a formal and rules-language level – I noticed no serious snafus. Layout adheres to an impressive 2-column b/w-standard, and the pdf sports impressive b/w-artworks as well. This is a beautiful booklet. The pdf comes fully bookmarked for your convenience, but unfortunately does not make full use of its layered nature.

James Edward Raggi IV’s “Tales of the Scarecrow” makes for a rewarding, deadly and horrific sidetrek thoroughly suitable for Halloween, one that thankfully steers clear of the old and tired “animated scarecrow”-trope in favor of a more interesting set-up where player-ingenuity ultimately depends whether they’ll live or die. (As an aside, recognizing the truth could be an adequate end for a one-shot in the vein of purist Cthulhu modules, where everyone dies or becomes insane…) So yeah, this is a fun supplement, available for a more than fair price. It doesn’t reinvent the wheel, but it doesn’t have to. As written, I consider this to be well worth a final verdict of 4 stars.