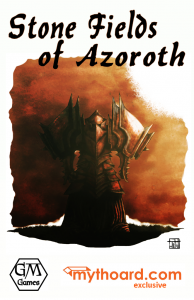 This is a bit different: The Stone Fields of Azoroth represent a mini-sandbox of sorts, and the deal includes 3 different pdfs as well as a .png-map. Said map depicts the village of Bad Water and looks charmingly hand-drawn. Much to my chagrin, no player-friendly version sans numbers and the like is included.

Rules-system wise, these pdfs adhere to Swords & Wizardry, though, as always, adapting the content to another old-school rule-set is pretty simple. AC is presented as ascending. Magic items are bolded in text. Monsters get full stats, while NPCs note their class levels, if any, and their actual profession in the context of the village. Now, this bundle of sorts presents a sandbox of sorts – two of the pdfs depict the “adventure-locations”: Book 2 presents a 6-room mini-dungeon, while Book 3 sports basically a climactic multi-stage encounter in the wilderness. The only maps for these also double as the front covers of these books, showing the region inside a circle in the middle of the front cover. Oddly, no .png maps for them are provided, even though the covers do make clear that these should indeed exist. While the map of the mini-dungeon sports squares, the like can, alas, not be said about the one that depicts the area of the confrontation on book 3’s cover, making dimensions somewhat opaque.

Book 2 clocks in at 8 pages, with the front cover acting as the map – and all pages sport content.

Book 3 also clocks in at 8 pages, with one page devoted to a nice “Thank you”-message, leaving us with 7 pages for this one.

All pdfs are laid out in 6’’ by 9’’ (A5), and the font-size is pretty large, which makes it feasible to print out 4 pages on a given sheet of paper. As for level-range, I’d suggest a well-diversified party, and difficulty-level-wise, this is tough – the finale can easily result in a TPK due to a few bad rolls. As for level range, I’d probably situate this somewhere around the level 3 – 5 range.

Now, while the books are numbered, they are not necessarily be required to be run in sequence, though it is very likely, and suggested, that the PCs begin exploring the village of Bad Water.

This is as far as I can go without diving into SPOILERS. Potential players should jump ahead to the conclusion.

All righty, only GMs around? Great! So, Book I begins with a handy overview of the keyed locations with names noted, making that aspect pretty GM-friendly, The services available are also explicitly noted here, which is a comfort-plus. The village of Bad Water is depicted in LAVISH detail: We begin with a handy overview noting the high-quality stone and how it makes farming challenging, while also briefly touching upon terrain features…but it’s the NPCs and homes that make this stand out: Each and every NPC in the village is discussed. Every house, every farm aid. All have names, all have agendas, all have things that drive them and characters. Tim Shorts really play to is strengths as an author here, managing to conjure a vision of interesting and evocative folks that feel surprisingly multi-faceted: Much like authors like Stephen King in a fantasy context, his “small people” feel alive, with all the foibles and flaws of the conditio humana in full display. In short: This village is inspired and feels organic, detailed and alive – it may well be this settlement that makes you get this, and personally, I consider the village worth the asking price. It’s really worth the praise and shows a keen insight into the human(oid) mind. Bad Water, as written, is a place you will want to use.

Now, unbeknown to most residents, the stone fields also are the place where a civilization once fell down, and this ties in with the adventuring locales. The connections between them, alas, remain somewhat opaque and remain open to GM placement.

Book 2, the one depicting the mini-dungeon, takes places in the “Last Temple of Praxus”, a recently unearthed temple of a long-forgotten deity of imprisonment. That being said, chances are decent that the PCs will be sent fleeing: The first monster herein would be a screamer, an undead that screams every round (no idea regarding the range of the scream) that can scream while it attacks. It has two claws, so two screams per round? No idea. On a failed save, the PCs will have to run away for an hour. Yeah, that can becoming pretty annoying. Anyways, the second unique creature herein, the manifestation of hopelessness, is not only mechanically more interesting (it splits, ooze-style) and has unique effects for its attacks, with a save to negate. Alas, no durations for these effects are noted anywhere, nor how you can get rid of them. Are they curses? On the plus-side, a couple of scrolls and the context here allows the PCs to discern and piece together some aspects of the background story. As a minor complaint: The PCs may get a rod of cancellation herein and potentially thus lose all magic items, so if you#re stingy regarding magic, this is one aspect to look out for.

Now, ultimately, the PCs will find a statue of a pretty mighty warrior wielding two short swords – that would be Samsus X, last champion of Praxus. He is petrified, and he is mad and animates if someone enters the room – the erstwhile champion/tyrant of the forgotten deity makes for a deadly enemy, being a fully statted 7th level fighter. Samsus X was devoted to his divine liege and offered sacrifice – but had his own people turn upon him. How bad were things? The folks rather worshiped devils than be subject to his whims. Yeah, pretty bad.

Praxus indeed seems to be a rather nasty god: He has created items called imprisonment stones, one of which holds the infernal commander still hidden from the world. They also detonate, but don’t specify how much damage they can withstand etc. Samsus X is deadly courtesy of his save or suck blades – each of the blades can immobilize a target hit that fails a save. Thankfully, they require blood, and eventually, quests to maintain their power, which means that triumphant PCs will have to think twice. Besting the erstwhile champion and destroying the stone will have the prison of infernal Azoroth manifest once more, though a shrouded figure, Praxus’ last vestige of power, will manifest, attempting to recruit the PCs. Failure to comply results in easily one of the most lethal encounters herein, as 14 (!!!) animated chains drop from the ceiling to attack.

Book 3, then, is pretty apocalyptic: A darkness has fallen of a part of the stone fields (not sure how big the section is, though) and temperatures have dropped to freezing: Approaching the darkness will make the PCs encounter one local fighting with 2 imps – the man is crazy, and the imps, well, are deadly. Worse: Two more are waiting in the wings. Since we’re talking old-school gaming, this means that the PCs will face 4 enemies with save or die stings. Ouch. More imps will assault the PCs as soon as they enter combat with another creature here. Within 5 monoliths, one of which lies shattered (that one was tied to the imprisonment stone, there is an armor, bound by mithril threads. While the threads can only be cut with +3 or higher weapons the PCs are unlikely to have, the monoliths may well be destroyed. Doing so unleashes a bulette, an insect swarm, and a save-or-die spore-cloud. Once the monoliths are destroyed, the mithril threads holding the armor fall from the item and unleash Azoroth. The armor is actually a custom-made magic item, an armor of imprisonment made by Praxus’ clergy. Azoroth, with AC 24, after all these save-or-die-saves, makes for a hardy horned devil type-foe with a short-range fear aura. His damage capability falls behind that of e.g. glabrezu etc. and he has no XP value noted – which btw. extends to all creatures within this supplement.

Editing and formatting are pretty bad. There are rules-relevant deviations that make understanding how some critters work hard. On a formal level, the often nice prose suffers from verbs, sentence-fragments etc. missing. There are a lot of these instances. Layout adheres to a no-frills 1-column b/w-standard. The pdfs sport a couple of nice, original b/w-artworks. The full-color map of the village is nice, but the lack of a player-friendly version is a bit of a bummer. The lack of full-sized artworks for the adventure-sites of Book 2 and 3 are puzzling. Annoyingly, none of the three books come with any bookmarks.

Tim Shorts’s “Stone Fields of Azoroth” constitute a mixed bag, if there ever was one; on one hand, we have a massive, inspired and smart village that feels alive in the best of ways. I love it. On the other hand, formal deviations, the aforementioned map snafus…these do somewhat compromise this offering. The mini-dungeon is pretty hardcore and difficult, but in a (mostly) fair way; however, the finale is a ridiculous assortment of save or dies thrown at the PCs, and is imho not challenging, just frustrating – which is a pity, for the atmosphere is great. The structural issue of the locations and their relation to each other in a spatial sense also represents a detriment here.

This was once a mythoard exclusive, and this makes me think that it was written with a strict deadline: The village shows the care and detail we expect from the author, but the finale in particular feels rushed. The numerous glitches also add to this impression. With some careful editing and a bit more gestation, some smart connections and a timeline or the like, this could have been an impressive 5-star achievement; as written, it sports an assortment of serious flaws. With these, I can’t rate this as highly as I’d like to – if you are interested in the village, check it out. I have to rate the entirety, though – and for the whole packaged deal, I can’t go higher than 3 stars.

You can get this flawed, but interesting supplement/module here on OBS!