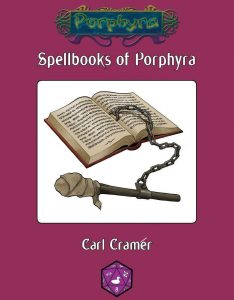 And now for something completely different! This installment of the “…of Porphyra”-series clocks in at 38 pages, 1 page front cover, 1 page editorial, 2 pages of SRD, leaving us with a massive 34 pages of content, so let’s take a look!

After a brief introduction, we take a look at different spellbook styles, a section that, on its own, should already be considered required reading for many GMs. After all, why should all spellbooks be profane paper or vellum? Instead, this section talks about birch bark, jewelry, tiles, runesticks and magic itself acting as the medium to record magic. It may just be a page, but it is a page that can really jumpstart the creation process. Icons and talismans are similarly mentioned, and an important, often overlooked note is provided: Unless specifically enchanted and modified, spellbooks are per se not magical! That is important for hiding them in plain sight, etc. Spellbooks are categorized in 5 general categories: Formula books, spellbooks, occult books, meditation books and prayer books. Meditation books are used by spontaneous arcane casters, occult books by psychic casters and divine books by divine casters. Using another type of book than the intended one requires UMD and, if this differentiation makes no sense to you, an optional rule to ignore that is provided. I would not suggest doing so, though, as it can upset the careful balancing between spell types. Calculating value and the conditions to get the respective preparation ritual’s benefits are covered next, with writing and ritual costs collated in a handy little table.

And then, we begin the massive, main meat of this supplement. Spellbooks. Formula books. Prayer books. A metric, frickin’ ton of them. The respective entries feature a read-aloud description of the respective books, the values notes, price with and without preparation ritual, and the spells, of course. They also note the class and level of the author. Class-wise, all Paizo-classes, including antipaladin and bloodrager are covered, with rook and primordial mystic also getting their entries. The Wizard chapter is divided into sub-chapters for specialist wizards, with a universalist chapter as well. As hinted at before, ACG and Occult Adventures classes are included in the deal.

The nature of these texts varies wildly – Research Report MCMIII, for example, allows you to expend the boon as part of a thrown weapon attack the increase the range increment of the thrown weapon by 5 ft. per highest level “elixir” (should be “extract” – but at least, the glitch is consequent) in the book that you can cast – apart from the minor terminology snafu, a cool scaling mechanism. Pondering an investigation by testing a hypothesis, increasing a poison save DC, increase polymorph duration at an increased counter-vulnerability for the effect…really cool tricks here. The more well-read of GMs will also find quite a few unobtrusive easter-eggs here: The antipaladin prayer-book “Geranine, or the Misfortunes of Sin”, obviously represents a now to the writings of Marquis de Sade. Gnomic proverbs, which encompasses Wisdom such as “what you see is not what you get” made me chuckle. Some of these are really subtle: “Abyssmal,” according to the descriptive text, praises the abyss, and is very confused about what it is, noting devils, angels and armies of elemental siege engines. If you’re like me, you probably couldn’t help but smirk, for, in parts, the title was indeed my response to some chapters of “Paradise Lost”, the book this undoubtedly parodies – the preparation ritual’s boon, planar defiance, fits well with that theme.

There are also books about the world tree, collections of remedies, a heretical text that attempts to unify two faiths..what about collected posters from the walls of temple-inns? Divine records? A truly boredom-inducing snorefest that hides truly potent powers? Lore literally recorded on leaves? An inquisitor tome called “Watchers on the Wall”? (It refers to the Wall of Sleep in Porphyra, fyi) The Hexenhammer can be found, and mediums, with the right book, may ask famous Mr. Blaine, main character of a series of occult books. (In fact, several other books for other classes also reference Mr. Blaine…which was something I rather enjoyed.)

Did I mention the “Fall of the House of Strat” (XD) or the fact that psychics will really like finding the “Horrors of Old Dunmark”? And guess what? Witches will certainly want the account of “Dreams of the House-Witch”, which allows you to anchor an area when preparing spells, becoming nigh impossible to pin down. A clever twist, represented in rules as well. At the highest power levels, we can find the option to make some conjurations last 24 hours…and “Advancement by Fireball” is certainly a book that sounds like fun reading. (It can also enhance your damaging spells.) The illusionist tome “Selling Out” also got a chuckle out of me. The pdf is suffused with great ideas for the respective tomes, varying themes and focuses as well as boons constantly.

The pdf comes with a bonus file, depicting the CR 3 apiary devil, poisonous drones with a hive mind that can construct room of black foam in bewildering speed. I liked this critter, as it provides a rather neat excuse for the Gm to suddenly generate an alien and horrific environment.

Conclusion:
Editing and formatting are very good on both a formal and rules-language level, bordering in both cases on true excellence. Layout adheres to a printer-friendly two-column standard that is mostly b/w with purple highlights. The pdf does not sport much artworks, just one previously used one – yes, this means that it is absolutely CHOCK-FULL with content. The pdf also comes with detailed, nested bookmarks for your convenience, making navigation as easy as can be.

Every GM has their pet-peeves regarding the prepping of the game. For me, the one aspect of the game I loathe with a fiery passion, is making spellbooks. I just don’t consider it to be enjoyable. Other folks will hate adding templates to monsters, but for me, it’s the much easier and quicker task of making concise spellbooks.

Because I want them to have a theme. An identity. And I seethe internally, whenever my players miss them, after I have puzzled together so many fitting spells, after I came up with a cool preparation ritual/boon. I talked about this in quite a few reviews; it’s one reason I tend to use more spontaneous casters than prepared ones.

And it’s, honestly, a damn pity. With all my books and pdfs, I can name surprisingly few that provide a decent accumulation of spellbooks with character, and these cases tend to gravitate towards the grimoires/high-powered end of things, where the books almost become their own characters. Now, don’t get me wrong: The most treasured possession of my current gaming group may well be “The Inverse Calculus of Unseen Refraction” by Legendary Games, but you can throw books of this power at the PCs all the time. You need moe subdued, yet relevant books, preferably ones with character.

Enter this pdf. Carl Cramér has done what I wouldn’t be able to do without rage-quitting at least 100 times. This book contains more than 100 (!!!) spellbooks, ready to use. Had-crafted. With unique benefits and character. This humble, unpretentious pdf managed to make reading through this vast amount of spellbooks actually INTERESTING. Heck, its allusions are so subtle and unobtrusive that you may not even get them all and still have a blast with this. And that’s how it’s supposed to be. The book retains its serious angle and concise in-game aesthetics without compromising its raw, undiluted utility.

In a surprising coup, this humble book represents honest, unpretentious design-WORK. Capital letters. This took a ton of effort, and it shows – it’s not something you can put together in a day or two. At the same time, this pdf very clearly emits a sense of playfulness and joy, which is remarkable, considering the very limited space that it has to operate within; each book does not have that much room to make it unique, and it should be seen as testament to the author’s passion that they don’t start to become redundant after half the book.

In short, this is a supplement that oozes passion and care, that genuinely feels like a supplement that was not only made to make the lives of GMs easier, but also to inspire, to spread some joy. This could have been an excellent example of “solid workmanship”, but it doesn’t settle for it, instead adding those little artistic flourishes that elevate a good book to a truly great one. Considering the type of book this is, the success in this endeavor should be considered to be even more impressive.

In short: Do yourself a favor, cut down your prep-time and get this pdf. Heck, even if you like making your own spellbooks, this may well be worth checking out, based on the strengths of the concepts this contains, based on the versatility of the books featured. This is an excellent, super-useful book, and receives 5 stars + my seal of approval.

You can get this glorious little time-saver of a book here on OBS!

You can diretcly support Purple Duck games here on patreon!