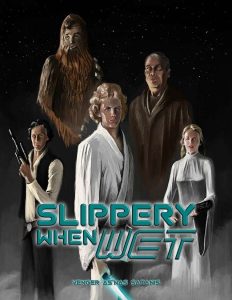 This module for the Alpha Blue RPG clocks in at 15 pages, 1 page front cover, 1 page editorial, leaving us with 13 pages of content, so let’s take a look!

At this point, I expect you’re familiar with Alpha Blue – it’s a RPG designed in the vein of 70s and 80s scifi-porn-parodies and thus contains copious amounts of sleaze and associated themes. I covered all three big supplements for it, so if you’re not familiar with the game or unsure whether this is for you, take a look at the respective reviews. Rules-wise, we have a variant of the VSD6-engine, so if you’re familiar with Venger’s “The Outer Presence” or “Crimson Dragon Slayer”-games, you’ll know how to play the game.

We begin this pdf with a 1-page summary of how to create and use anticipation (particularly in the context of Alpha Blue) before getting a d20-table of spacer-exclamations. Interesting: The pdf also acknowledges the sometimes frustrating lethality of the game and offers a potential way of dealing with that: For only 50K, you can get a device that generates such second chances…but may also generate multiverse malfunctions…which, in Alpha Blue,can have horrific consequences. I mean, who would want to live in a version of reality where Hitler won, Escape from New York’s the state of the US and Smash Mouth is the biggest band ever known? Yeah, figured as much.

So, that out of the way, let’s talk adventure! The following contains SPOILERS. Only SDMs should continue to read; players should jump to the conclusion.

All right, so the mentad would be biological computers that hail from a galaxy where robotic uprisings and the like were all too common – the Sa’rung galaxy. These biological computers maintained the level civilization had achieved…but as such machines, they had no sex, no sleaze, no porn…and then, the parasitic zantians migrated to that galaxy and began infecting mentads, granting these insectoid creatures access to the Network, a kind of extranet/repository of collective knowledge…and within hides the well-hidden last shred of porn, the naked pictures of Felicity Hance…and if the zantians can find those, they’d have the power to dominate the galaxy. Why? How? Well…she’s pretty, I guess?

The PCs witness a hyperspace jump close to them, which disables their warp drive…and the ship has initiated its self-destruct protocol, so they better start communications right now. The vessel is piloted by a G’nord carrying evidence of the last piece of Felicity Jace’s porn on a data crystal – with the mentad hot on the heels of the alien. The alien thinks that it’s life is disposable if the universe continues to have a chance to see Felicity naked…but whether they save the alien or not, they won’t be able to access the data-crystal – for that, they’ll have to go to Neo Aquarius…which is currently in the throes of all out warfare. The PCs will have to hijack an underwater vessel while war’s all around (12 sample events and 6 looting results provided – and then, they’ll pilot the underwater vessel “bearded clam” – which is btw. once again lavishly mapped by Glynn Seal and included as a high-res jpg as well) – REALLY cool: For once, we get detailed explanations of the functions of the vessel – can we have those for all Alpha Blue vessels, please? It really helps and adds greatly to the immersion.

Editing and formatting are very good, I noticed no serious glitches. Layout adheres to a nice two-column standard in b/w, set against a slightly blue-tinted background with subdued veins. a Printer-friendly version has been included. Artworks are in b/w and range from the usual, high quality to a rather jarring piece for the mermaids. The pdf comes fully bookmarked for your convenience (kudos!) and the cartography of the ship is AMAZING and in full-color. Getting the high-res jpg being the icing on the cake.

So, none of the Alpha Blue scenarios contained in any of the sourcebooks really worked well for me – they were basically very barebones sketches presenting ideas and not much rules to supplement them. This is different: From monster/NPC-stats to the details of the vessel to the fitting battle-field mechanics, there is some actual game to supplement the, as always, hilariously over-the-top ideas.

In fact, this is, BY FAR, the best scenario currently available for Alpha Blue – at least when compared with the sketches in the modules. When compared with Venger’s other adventures from the Trinity of Awesome +1, it would frankly be, at least for me as a person, better than “A Green Jewel They Must Possess.” As a reviewer, though, I do consider the module’s end to be too abrupt – I don’t know if this is sequel-bait of not, but personally, I think it deserves, no, needs a sequel to tie up all the loose ends. (Haha…sorry, will punch myself later for that…)

All in all, we have a fun scenario and hence, my final verdict will clock in at 4.5 stars, though I don’t feel like I can round up for it. If you’re enjoying Alpha Blue and have no time to flesh out adventure-sketches, then consider this a must-own, if not perfect, scenario for a fair price.

You can get this inexpensive scenario here on OBS!

You can get the print-book Trinity of Awesome+1 that contains this in print here on OBS!

If you want all three base Alpha Blue books in one bundle, you can get those here!