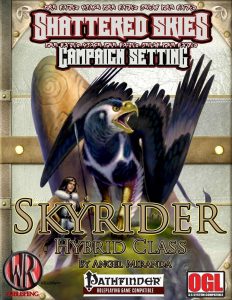 This hybrid class clocks in at 9 pages, 1 page front cover, 1 page editorial, 2 pages of SRD, 1 page back cover, leaving us with 5 pages of content, so let’s take a look!

The skyrider base class received d10 HD, proficiency with simple and martial weapons, full BAB-progression, good Fort- and Ref-saves and proficiency with all simple and martial weapons as well as light and medium armor and shields, excluding tower shields. How much skills per level, you’re asking? NO IDEA. That info is missing from the pdf. Blergh.

The class gains challenge at first level, +1 daily use for every 3 levels beyond first. The skyrider also chooses an order at first level. Two specific skyrider orders are included here, with the first being the order of the zephyr, who increases the movement rate of skyrider and mount when moving towards the target of a challenge (+10 ft., +20 ft. and 30 ft. at 7th and 15th level). Skill-wise, the order nets Perception and Survival as class skills. 2nd level yields the handy ability to count as 1/2 weight for the purpose of determining mount encumbrance as well as eliminating the penalty to AC when charging. 8th level yields a tripled speed when charging, which is VERY strong. Worse, spear fighter weapon group weapons now behave as though they were lances…i.e. like one of the most problematic aspects of the base game. Not the biggest fan there. 15th level nets a +2 AC bonus versus ranged attacks for rider and mount when charging, an additional 50% miss chance. Additionally, they deal automatic damage (untyped) equal to twice the class level to any obstacles in the way – no save, no attack roll – just broken…and I don’t even have to state how this can be highly problematic in its precise rules-interactions, right? They also take only 1/4 damage from damaging obstacles.

The second order contained in this book would be the order of venom, who increases the threat range of the mount’s attacks by 1 in challenge…which isn’t bad per se. But threat range increases by a further 1 for every 4 levels thereafter. Skill-wise, both Fly and Survival are included…which is weird, considering that the base class already receives Fly as a class skill. For the cavalier, I guess… Weird, btw. – the order of venom’s order abilities are formatted differently than those of the order of zephyr. Since the order also yields a bonus on Knowledge-checks made to identify creatures, its 2nd level ability builds on that; identified creatures observed as move actions can thus yields short-term bonuses that increase at 6th level and every 4 levels thereafter. 8th level allows the skyrider to use wyvern poison as a standard action and execute one attack with the poisoned weapon. 15th level lets the skyrider dismount, fall up to 200 ft. and attack a foe at the end; if successful, the falling damage is added to the attack and the skyrider takes no damage. Sooo, is the falling damage multiplied on a critical hit? No idea. The pdf also sports companion stats for wyvern and griffon, though the griffon’s advancement-lines lack proper formatting.

Starting at 3rd level, the class receives the high talon ability, which nets +1 to atk and damage whenever attacking from higher ground, increasing the bonus by +1 at every 3 levels thereafter. 4th level yields the griffon companion, which uses the skyrider’s level -3 as druid level. The griffon does not receive share spells, obviously, but does gain Light Armor Proficiency as a bonus feat. This feature is weird, since it locks the character in the griffon-choice, contradicting the wyvern-option presented by one of the orders – RAW, the order of venom would thus only be available for the cavalier.

5th level yields mounted evasion, which is pretty self-explanatory. 7th level provides the option for the griffon to carry the skyrider…and this is weird, for, provided the griffon is trained and weight etc. checks out, he could do that before. Carrying the rider also “reduces the fly speed” but fails to specify by how much. The skyrider may use Fly instead of Ride while mounted. At 10th level, things get wonky and the griffon companion is treated as though the skyrider always had a full druid companion progression…which is incredibly clunky.

13th level nets full fly speed when carrying the skyrider…implying a fixed penalty for a rider, but failing to specify how that all interacts with encumbrance etc. It *looks* pretty functional…but unfortunately isn’t. 9th level yields Hover for the griffon, Flyby Attack for the skyrider. 17th level allows for full-attacks of both mount and rider after a charge at the cost of -4 to AC. 18th level provides mounted improved evasion. 20th level lets the skyrider dismount after a charge and execute one attack that automatically threatens a critical hit and may insta-kill the target. May? The DC is 10 + damage dealt…which is hilarious, considering all the crit-upgrades and potential boosts to charge attack damage. Also ridiculous: The skyrider may fall off the griffon, hit a target…and be caught by the griffon, regardless of distance. Yeah…makes no sense.

It should also be noted that the pdf has a section called “Skyrider Archetypes”…and nothing in it. The only content there would be the orders, one of which arguably isn’t even for the class.

Editing and formatting are not good. From the missing skills per level to typos and inconsistent formatting, the pdf suffers from a plethora of hiccups. Layout adheres to a nice 2-column full-color standard and the pdf has a really nice full-color artwork. The pdf has no bookmarks and cut-copy-paste of text is disabled, making the use of this pdf not very comfortable.

Angel “ARMR” Miranda’s skyrider is not without promise, the aerial cavalier…

…oh, who am I kidding? This lacks crucial information, has some seriously wonky abilities, is a one-trick-charge-pony…and worse, everything this pdf does has been done more precisely and better. Get the ultimate, excellent flying resource “Companions of the Firmament” – it literally does everything this pdf does better and so much more. It’s an EZG Essential for a reason. Alternatively, if you only want a nice aerial cavalier class, go for “Letters from the Flaming Crab: Winged Cavalry” instead; it also is vastly superior. Let me reiterate – this pdf is not a total wreck…but when compared to two vastly superior products, it has absolutely nothing going for it. Hence, my final verdict cannot go higher than 1.5 stars…and frankly, I can’t bring myself to round up.