Shadows of the Dusk Queen

Shadows of the Dusk Queen 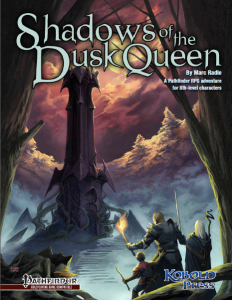 This module clocks in at 36 pages, 1 page front cover, 2 pages of editorial, 1 page SRD, 1 page back cover, leaving us with 31 pages of content, so let’s take a look, shall we?

This module was moved up on my review-queue at the request of my players. The following being an adventure-review, from here on out, the SPOILERS reign. Potential players should jump to the conclusion.

All right, still here? Even the shadow fey can love, in their own, alien way – and so, a scáthesidhe, exiled from the winter court and hence known as the dusk queen, retreated to the dark woods and ruled as one would expect from a lady with her moniker. Against all possibility, a man from a far off land of eternal sun and scorching heat found his path into the dusk queen’s dominion, where the two promptly fell in love – and here, the story might have ended, were it not for the construction of a dark mirror, which fueled the latent paranoia of the queen. The traveler, then known as sun king, tried to overlook his lover’s continuing descent into amorality and evil, but when he noticed her plans to invade his home, he acted – weaving mighty magics, he imprisoned the queen and sundered her mirror; tales of tragic love being what they are, his solution did not prove to be permanent – and thus, the PCs happen upon a foreboding, dark forest, where the wind itself carries the words “She has returned” to their ears.

Entering the forest, a lavishly-illustrated treant weeping acid tears tasks the PCs in cryptic hints to track down the shards of the dusk queen’s mirror – and escape is no option. From hampered teleportation to swarms of shadow stirges, the forest does its best to foil the PCs and yes, there is a table of wandering monsters, of which I encourage you to make ample use. The shadow forest’s overview map (which is no less beautiful than the artwork) does provide several obvious paths that can be tackled in different sequences.

The locations themselves can be considered a veritable who’s who of dark forest locations – from a pool of shadow nymphs to a bog most foul hiding an ancient monument and a spirit naga to a strike-force of bugbears under the command of a half umbral-dragon leader to a massive hangman’s tree, the task of collecting the shards is a quick and interesting succession of iconic locales – and yes, of course, the PCs also get a chance to duke it out with a shadow drake.

Once they have finally assembled all the shards, it’s time to face the dusk queen’s tower, wherein she tries to cajole them into using the shards to repair her mirror and restore her to full power – hopefully barring that, she will attempt to use force – by means of her own theurge-magics as well as a graveknight antipaladin and his companion. Besting the two deadly adversaries (significantly easier if a strong-willed PC uses the powerful shards to blast them!) will see the end of the adventure and the tower’s collapse – for now, for a sequel is in the making. Oh, and yes, there is a powerful, intelligent spellbook to be found here.

Now this pdf has GLORIOUS artworks and cartography all around – and you can actually use both: The module provides an art & map section that reproduces the Paizo-level gorgeous artwork (one provided for most major antagonists!) as one-page hand-outs to show to your players. Furthermore, the glorious full-color cartography of the dark wood is provided in a player-friendly version and to trump that, we also get the dusk queen’s ruined throne room as a player-friendly, overview with a grid AND in battle-map-style size to print out – now THIS is going one step beyond! Two thumbs up!

Editing and formatting are top-notch, I did not notice any significant glitches. Layout adheres to a beautiful, 2-column full-color standard and the artworks by Bryan Syme are staggering -see the cover? The copious amount of interior artwork is JUST AS GOOD. Yes. This is one of the most beautiful modules I’ve read in ages, with cartography also ranking in the top-tier echelon, especially due to the copious support regarding battle-map, player-friendly versions etc. The pdf comes fully bookmarked for your convenience.

My players still talk fondly of Marc Radle’s first module published by Raging Swan Press, The Sunken Pyramid, so when I brought this module to the table, they were keen on playing it. The dark wood has a superb atmosphere that thankfully stands on its own and does not provide overlap with AAW Games’ superb Snow White duology (Part I and Part II), instead creating its very own atmosphere and mood – which is a good thing. This module is all about atmosphere that is captured in great detail and enhanced by what could be considered to be some of the most stunning pieces of artwork I have ever seen in a 3pp module. Especially at the low price point, this is stunning.

Now I playtested this one twice, for a reason – my players were insanely lucky and had 14 natural 20s in the run of this module – and since it is pretty much a brief one that focuses on atmosphere, this meant they pretty much curb-stomped the opposition. When I ran it for a second time for a significantly less experienced and optimized group, there was one unlucky PC death, though that is to be attributed to abysmal luck. This module is not a meat-grinder and neither is it particularly challenging – the final fight in particular was very easy on my PCs in the first run.

Difficulty-wise, this is not a particularly challenging module, but it is a very much worthwhile adventure that feels completely like a Kobold Press adventure, breathing a sense of ancient fairy tales gone wrong. In direct comparison, the fights themselves do feel like they could have benefited from more environmental peculiarities and hazards – but that may just be me being spoiled. Shadows of the Dusk Queen is a premium quality module with a unique mood that very much manages to depict a compelling, short trip into a dark forest that actually deserves the moniker. My aforementioned nitpicks can mostly be attributed to me being a spoiled bastard and are offset by the quality of both production-values and mood. I do advise GMs running this for an experienced group to increase the difficulty-levels, though. In the end, I am happy with this module – its story resonates, its production values are superb, its builds are non-standard and interesting – and while it may be brief and none too hard, it was a great experience to run. My final verdict will hence clock in at 5 stars + seal of approval. Now can we have more modules of that caliber? After all, that’s what made me a fan of Kobold Press back in the day when it still was Open Design…

You can get this inexpensive, awesome module here on OBS!