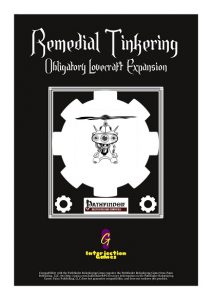 This expansion of the tinker-class clocks in at 5 pages, 1 page front cover, 1 page of SRD, leaving us with 3 pages of content, so let’s take a look!

“It had to be done.” This simple sentence and the very title made me smile. It takes cojones to choose such a title…and make its very introductory title actaully kinda funny. So yes, this would be the “obligatory Lovecraftian expansion” of the tinker’s options…but is it on par with the more evocative tinker-expansions?

As we have so far established a ton of new descriptors in the expansions and the pdf thankfully collates all of them for your convenience; the content herein ties into the absolutely GLORIOUS Happy Little Automata-expansion (aka provide unique paint-jobs that allow for combo-tricks!) – and if you don’t have that one yet, you should certainly get it. If you absolutely don’t want to, you don’t have to, though – only one of the inventions herein has the paint descriptor. The pdf introduces a new subtype invention, the tentacle invention. Only a single tentacle invention may be added to a given blueprint and since it directly influences the grafted tentacle, benefits only come into play when the tentacle is actively used.

We begin this supplement with two innovations: Tentacle Savant nets you the grafted tentacle invention as a bonus invention, treat it as a 2nd level invention with a BP cost of 2. In addition, all tentacle subtype as though their invention level was 1 lower for the purpose of learning them and adding them to blueprint. The second innovation, Wiggly Decorator, builds on it: Tentacle subtype inventions are treated as though they had the design descriptor and grafted tentacle (here not italicized properly) is treated as though it had a BP cost of 1.

The pdf also sporst a greater innovation, namely non-euclidean pathfinding…and it is a truly unique one: Automatons using diagonal movement get +10 ft. to their movement rate and don’t provoke AoOs when moving diagonally. This is so simple and cool, I honestly found myself wondering why utilizing diagonal movement this way has not been done before. Two thumbs up!

Aforementioned paint invention, bile green paint, imposes a penalty on Will-saves on those hit by the automaton. Automata with a maintenance mode are not destroyed at 0 HP, but rather at -10 HP; between 0 and -10 HP, the automaton is in maintenance mode, which behaves basically like the unconscious bleeding out so many mortal creatures of flesh are prone to. There also would be two strange aeons inventions: The strange aeons parser has you roll a d20 and record the result upon deploying the automaton; this roll may later be substituted for a d20 roll executed by the automaton, but only once and before results are made known. The follow-up invention, the strange aeons precognition device lets you use that result even after results are made known.

Now, this has been pretty much a tradition, so I expected that: The one tentacle restriction imposed on the tentacle subtype? With the dual tentacle invention, you can ignore it and use up to two tentacles at once. Additionally, the benefits of the grafted tentacle invention are maintained when making use of a single invention with the tentacle subtype – the other tentacle can cover for it, after all! Tentacles! Finally! So, what modifications for tentacles are available? Itchy trigger tentacles works with grafted tentacle…and it must, for it allows the tinker to issue a kamikaze directive as a free action after an automaton successfully hits with the tentacle, but only at halved tinker level for the purpose of the kamikaze directive.

Prehensile tentacles allow the automata to wield one-handed melee weapons in the tentacle, adding reach to it. Sticky tentacles is cool: The tentacle emits a sticky good that duplicates the effects of spider climb constantly…and finally, sludge launchers, usable as a directed standard action, allow the tinker to have the automaton fire a blast of adhesive goo at a target within 60 feet. This is a ranged touch attack and entangles the target for 2 rounds on a successful hit. The grafted tentacles remains inoperational until the master’s next turn after being used.

Editing and formatting are very good: The rules-language is as precise and to the point as I’ve come to expect from Bradley Crouch. On a formal level, italicization and the like isn’t as concise as in most Interjection games-books; I noticed a couple of “requires” erroneously italicized. Only cosmetic glitches, though. The pdf sports nice b/w-stock art and the pdf has no bookmarks, but needs none at this length.

Bradley Crouch’s “Obligatory Lovecraft Expansion” is a cool addition to the tinker’s arsenal. Using diagonal movement type as a game-relevant basis for unique tricks is actually something I have never seen before – and in an engine as versatile and long-used as Pathfinder, that’s indeed something! Similarly, the respective inventions are fun an evocative, though I honestly wished the pdf had a means to kamikaze a tentacled automaton and “spread the taint” of the tentacle to another, non-tentacled automaton…it would have worked well within the context of the theme. Oh well, that kind of combo-potential may perhaps be found in a future expansion…if I may suggest a title there: “Lovecraft Expansion II: Non-euclidean bugaloo.” I’m kidding, of course – I’d actually want to see that!!

All in all, this is a fun, cool expansion to the tinker and, in spite of very minor formal hiccups, this is well worth 5 stars.

You can have Bradley Crouch write material according to your specifications and support him here on his patreon!