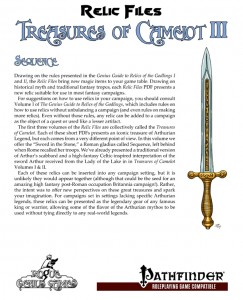 This pdf clocks in at 4 pages, 1 page SRD, 1 page introduction on the first page, leaving us with two pages for the relic, so let’s take a look!

So what are relics? well, relics were introduced in the Genius Guides to Relics of the Godlings I + II and they essentially are Rogue Genius Games’ take on magic items that increase in power with your character – and if you know anything about my stance on that topic, then you won’t be surprised by me really liking this take. Now unlike Rite Publishing’s Legacy Items and Purple Duck Games’ Legendary Items, most Relics are inspired by real life mythology, for better or for worse, and increase in power every level.

So what is Sequence? well, this would be a quasi-Roman gladius-take on the concept and trope of Excalibur, once again with CL equal to wielder’s character level if applicable. Sequence starts off as a blade that counts as magic for purposes of overcoming DR. It also grants scaling bonuses to Perception-checks, scaling cold resistance. The blade also receives the flaming quality and on 11th level, you have to specify a bane, which therefore remains in effect for as long as you are the wielder of the blade – new wielders can choose new banes. Attribute-enhancements this time around are applied to Str and Wis. So essentially a straight recolor of the last relic file? Not completely. The item does receive a new weapon ability at level, bright-flame. This +3-equivalent ability adds +2d6 fire damage, +4d6 on a crit and continuously emits 60 ft. daylight. It can’t be applied to a given weapon with flaming or flaming burst. Oddly, for one level upon gaining this ability (the 18th), this weapon loses +1. I realize that’s due to the increased potency of the enchantment, but still – I consider suddenly hitting worse to be odd in-game.

Editing and formatting are good, I noticed no truly significant glitches, though e.g. once the weapon special abilities have not been properly italicized – another parallel to Caladbolg. Layout adheres to a printer-friendly 2-column standard with a neat full-color artwork of the relic. The pdf does not have any bookmarks, but needs none at this length.

Author Andrew Marlowe provides a slightly superior version to Caladbolg; the new quality as flaming burst on speed is pretty nice…but in the end just a numerical escalation with a small bonus added. Other than that, this is damn close to Caladbolg, almost annoyingly so. That means it’s a solid weapon, a powerful sword…and unfortunately pretty boring. Apart from the new weapon ability poor ol’ Sequence has no single unique ability. Follow-up hits? Speed? Parries? Anything? Alack and alas, nope. There is nothing wrong with this item and I’m aware that this may sound harsh, but I consider this one pretty forgettable and in many regards, a clone of Caladbolg – which doesn’t help. The new weapon ability offsets the cloned abilities for a final verdict of 3 stars.

You can get this relic here on OBS and here on d20pfsrd.com’s shop.