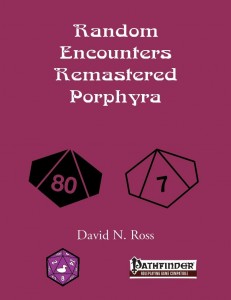 This installment of the glorious Random Encounters Remastered-series clocks in at a massive 48 pages, 1 page front cover, 1 page editorial, 3 pages of SRD, leaving us with a whopping 43 pages of content – quite a bunch, so what precisely do we get?

Well, first of, the obvious: All RER-installments so far have been setting-neutral, though NOT generic – the environments covered have been evocative and interesting throughout the series. Thus, it is a natural fit to expect to see Purple Duck games’ patchwork planet Porphyra with its unique environments to get its due, right?

So, since it has been *A LOT* of time since I covered an installment of this series, let’s begin by recpaitulating how this system works, shall we? Each installment provides numerous adventure areas/terrain types – from the steppes to primeval woodlands and tainted estuaries. The areas themselves can be customized by providing unique hazards and terrain features. The system is dead simple: Choose a CR, multiply that CR with 20, add that value to your d%-roll…et voilà, there you have an encounter suitable for your designated target CR. One roll, simple math, HUGE tables. This elegant system is enhanced in its usefulness by several components: 1) Advice on how to best use random encounters, particularly useful for novice GMs, obviously. 2) The why-hasn’t-this-been-in-the-GM’s Guide-level of smart disposition-system.

What’s that, you ask? Well, it’s pretty much the base set-up for the adversaries – they can be charmed, disarmed, etc. – perhaps they just want to flee or are injured…or subject to a mayday on water. The system may not sound like much, but its inclusion in this series actually expands the variety and focus of random encounters significantly.

Where was I? Oh yeah: 3) Terrain features. If you’ve been following my reviews, you may have noticed that I very much look for interesting terrain in modules, encounters, etc. – why? Because it makes the fight more interesting…one could claim that it actually defines the fight as much as the combatants: Think about it, whether it’s sieges, any swashbuckler-movie ever made or simply the tired old Luke-Vs.-Vader-showdown-comparison: Could you imagine that working in an even, bland room? Exactly. Hence, terrain is important – exceedingly so. There is a reason Raging Swan Press’ dressing files are as beloved as they are. Well, this one here focuses more on rules-relevant terrain modifications – from fey-based hazards to quicksand, reefs and shifting dunes, there is a significant variety of evocative material in that regard, all ready to be inserted into your encounters at a simple glance – and yes, it also sports a table for random tunnel direction turns, widowmakers, mirages…you get the idea.

Beyond this general and awesome set-up, however, the respective environments and their massive tables also feature recommended dispositions and terrain features as well as building blocks you can use to further enhance the random encounter you create – and yes, if you’re doing your task right, players will not notice that they’re fighting a random encounter. A quick glance of the respective table-short hands will provide the discerning user of this supplement with a nice surprise: Both Purple Duck Games’ rather impressive Monsters of Porphyra and the fourth Bestiary have been included in the creatures featured in these exceedingly-detailed tables, though the lack of neither of them will prove detrimental in a significant way to you when using this book: There are so many encounters herein, the tables are so big, that the entries featuring both books could be skipped, should you elect to do so.

As far as terrain-types are concerned, we have a field day: God-blasted wastelands, haunted seas, spirit-watched countries, tainted estuaries and underdeep ruins alongside primeval woodlands provide pretty much an all-killer, no filler selection of environments that imho prove just as useful beyond the confines of Porphyra as on the patchwork planet.

Editing and formatting are top-notch, I noticed no significant glitches. Layout adheres to Purple Duck Games’ printer-friendly two-column full-color standard with some exceptional artworks from Monsters of Porphyra being used in this book as well. The pdf comes fully bookmarked with nested bookmarks for your convenience.

David Nicholas Ross’ Random Encounters Remastered-series is pretty much one of those useful to have time-savers for the GM – having these pdfs at your beck and call makes the creation of random encounters a) faster b) more rewarding and c) results in more detailed, fun random encounters. While the very notion of the random encounter has been much maligned, my experience has been that they make the game more interesting, versatile and ultimately, more organic – they help create a more concise illusion of a world that’s alive. This installment sports not only concise dispositions and fun hazards, the lists themselves are also exceedingly versatile – and what more can you ask for? I encourage you to check this one out and remain with a final verdict of 5 stars + seal of approval.

You can get this handy encounter-generator book here on OBS and here on d20pfsrd.com’s shop!

You can support Purple Duck Games creating monsters here on their patreon!
Endzeitgeist out.