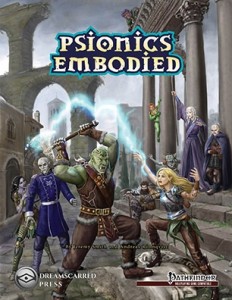 This book clocks in at 69 pages, 1 page front cover, 1 page editorial, 1 page ToC, 1 page SRD, 1 page advertisement, leaving us with 64 pages of content, so let’s take a look, shall we?

So, we’ve all been there – suddenly, mid-adventure, a PC bites the dust and the player has no time to make a new character for now, requiring the temporary use of an NPC. Or, more often, one sits on the DM’s side of the screen and makes *yet another* NPC-build. I know I do that and it is an annoying bottleneck. There are certain tricks and combos one stumbles across and then re-uses them time and again. The issue becomes more pronounced if your campaign is like mine and sports a vast array of different 3pp materials. Paizo only has the CORE-classes covered with the codex and beyond that, I may point towards Rite Publishing’s superb Faces of the Tarnished Souk-series, Frog god Games’ Unusual Suspects and LPJr Design’s Usual Suspects…and beyond these, good NPC-books become scarce, with only a couple of Legendary Games-books coming to mind. This was particularly annoying, at least for me, when it came to psionics (and some other subsystems I regularly use) – I had to make too many of these guys from scratch and at some point, tunnel-vision starts to set in.

Introducing this book, psionics now receive an array of NPCs for your perusal to insert into your campaign. The numerous characters herein are crafted with the heroic attribute-array and appropriate WBL and each character comes with 3 builds – one for level 5, one for level 10 and one for level 15. Now I am not going to go into the details for every NPC herein – for every creature herein comes with a full-blown background story as well as advice on how to use the NPC as both an ally or villain – and yes, this means that these guys and gals are full-blown, developed personalities, not just statblocks. From radiant heroes to plague-doctor elans gone full-blown insane evil, the characters herein take the base classes in different directions, with tacticians, dreads, marksmen, etc. all receiving their due. Some of the specialists of the psion-class receive no representation, though. Blues, forgeborn and similar psionic races are well-integrated into the builds within these pages.

In fact, the characters herein work exceedingly well as both allies and adversaries and, more often than not, offer some deviations from tired and true character tropes, thus coming to life in a surprising captivating manner. From the honorable, yet brash Desh to the ruthless, but well-situated Count Malbor, the diverse NPCs in this book do a nice job of running the gamut from cool allies to despicable adversaries, with the builds themselves doing a neat job of representing the particulars of the NPC and their ideology in the crunch they provide.

Editing and formatting are very good – apart from some rare glitches like an incorrect CR and similar minor glitches, the pdf can be considered well off in that regard. Layout adheres to Dreamscarred Press’ beautiful 2-column full-color standard and each and every NPC in this book receives a gorgeous full-color artwork – kudos! The pdf comes fully bookmarked as well as with a more printer-friendly version with a white background.

Jeremy Smith, Andreas Rönnqvist and Matt Medeiros have crafted a damn useful NPC-collection – finally, an array of psionic NPCs, all ready for use, with just the flick of a finger. I *love* books like this, simply because they allow a DM to focus on cool storylines, preparing a module etc. – or simply add a spark of psionics into another-wise non-psionics module. The NPCs are diverse, their writing is neat, the builds solid – so there is not much to complain in that regard.

That being said, there are some minor nitpicks I can field against this book, the first of which would simply be scope – I would have loved this to be a NPC-Codex-sized, massive book of diverse builds, covering all psion-specialists etc. Now I can’t hold the scope of the book against it, but still – a bigger book would have been awesome. Similarly, some people may have wanted scaling suggestions to bring these NPCs down to less powerful builds, but once again, I consider that not the book’s fault. My only true gripe with this book would be the following – unlike the NPC Codex, this book presents rounded characters and the builds, for that, feel very much linear. While some archetype’d combos can be found, you won’t find any nasty multiclass combos in this book and for named NPCs, I would have expected one or two or these. Note that this does not make the book bad in any way – it’s just that making linear characters is much easier and less time-consuming than making complex, archetype’d multiclass characters.

But in the end, ladies and gentlemen, this is just me being a complaining nitpicker at a high level. The characters herein deserve to be called “characters” – they range from nice to inspired and some rather beg to be used, which is a neat accomplishment in my book – this collection is still a permanent addition to my DM-toolkit and well worth a final verdict of 5 stars.

You can get this nice collection of NPCs here on OBS and here on d20pfsrd.com’s shop!
Endzeitgeist out.