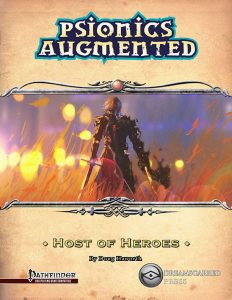 This installment of the Occult branch of Psionics Augmented clocks in at 16 pages, 1 page front cover, 1 page editorial, 2 pages introduction (which also contains notes on how to handle psionics and psychic magic in the same game, themes, etc.), 1 page SRD, 1 page advertisement, leaving us with 10 pages of content, though it should be noted that two pages are devoted to reference material, ensuring that you get the most out of this and have all required material in one place – kudos!

The host of heroes is an archetype for the aegis base class, but one so massive, it can basically be called a class of its own. The host of heroes (which I’ll just call “host” from now on) adds Knowledge (history) to his list of class skills. Instead of an ectoplasmic armor, the host calls upon legendary roles of old each day to form his astral suit. Each day upon regaining power points, one such legendary role is chosen and then emulated and the astral suit can only be formed into one matching the host’s chosen role. Activation is btw., a swift action. The host is always proficient with his respective astral suit and each of them has different free customizations that never count against the host’s total number of customization points spent on the astral suit. The appearance of the suit is not strictly chosen – instead, the suit mimics the appearance of the legend in question – as though he was channeling a larger than life version of the respective legend. Dismiss ectoplasm and no-psionics/magics field and interaction are properly covered, with manifester level being treated as class level. This replaces astral suit, but counts as it for the purpose of meeting prerequisites.

Instead of craftsman, the host gains a +2 bonus to two skills, as determined by the role he emulates with his suit, with 6th level and every 4 levels thereafter increasing the skill bonuses by +1. The host is considered to be trained in these skills. A big smile covered my face when I saw the theory (though I am not 100% sold on it) of the monomyth represented as the 3rd level ability. Each of the legendary roles has a list of customizations associated with its iteration of the associated facet of the monomyth theory. If you’re not familiar with it, picture the monomyth as a reduction of stories to an archetypic journey, which receives different facets in its various versions. For the purpose of the class, this means that the archetypic mythic roles represent such a version – and the more you spend, customization-point-wise, the more you get to embody that respective tale. When the host spends customization points on a customization (excluding free ones), he can assign it to a particular role, provided it is on that role’s list. A customization can only be assigned to one monomyth. A maximum number of such customization points equal to his class level may be assigned. If at least 3 points have been assigned to one, he begins unlocking special abilities – these are covered in steps of 3: 3, 6, 9 and 12 points are the respective thresholds to unlock new abilities.

In other words: The host can assign customization points to the roles he emulates, unlocking new abilities, adding further ability-choices: The host can assign these freely – e.g. a 12th level host could assign 3 points to 4 roles, unlocking 4 3-point monomyth abilities. Alternatively, he could assign 9 to one monomyth and 3 to another, unlocking the 3, 6 and 9 point abilities of one role, and the 3-point ability from another.

Additionally, each of the roles has a rite of passage, an action or test that the host can complete, starting at 3rd level, to gain a benefit from his role while his suit is activated – this bonus remains until he rests or violates the taboo associated with the respective rite of passage. Starting at 5th level, the completion of the rite can also gain a benefit, once for every five class levels, with cumulative effects – these include enhancement bonuses for armor, shields and weapons. As a minor complaint – the interaction with magic items potentially can be read to break the cap here. A caveat would have been prudent. This replaces damage reduction. At 4th level, the host can expend his psionic focus as a swift action to change the legendary role he emulates for Int-mod + 1/2 class level rounds, retaining customizations chosen, putting a damn cool twist on the reconfigure ability it replaces. The archetype also gets a custom capstone, saga’s end, which renders his suit dispel-proof. Additionally, when killed or affected by a death effect, he can choose to dismiss his suit “sacrificing” the legend – he is healed to full maximum hit points and unaffected by the attack…and before you start groaning – this burns the role for one week, preventing cheeses at even this high level. Kudos there.

The host of heroes may also choose from a list of a couple of new 2-point customizations: Beacon outlines a target that has hit the host for his allies making the foe easier to perceive/hit (and foes don’t see the light). Cunning represents basically a scaling headband of intellect, though personally, I think the skill ranks granted while wearing the suit should be locked at one skill – otherwise, this acts as a pretty potent skill wild-card. Faith nets a limited array of 1st level cleric spells, with subsequent takes unlocking higher levels. Magecraft does the same for sorc/wiz-spells, Potential for the psion-list. Skilled nets skill-bonuses and Wise Wisdom-enhancement analogue to Cunning – interesting: Most of these customizations have a limit on how often they can be taken, unless the host has the proper role emulated – this further entwines the concepts and rewards embracing the mode-style gameplay.

Okay, so, I’ve beaten around the bush long enough, let us take a look at the legendary roles in question, which, surprise, analogue to medium, etc., are based on the mythic paths in name and concept; I’ll just touch upon each, as covering them in-depth would bloat the review further. Beyond the classic roster, the overmind mythic path is also covered and the pdf does provide a handy sidebar that tackles Path of War-interaction with maneuvers and roles. The respective roles, as mentioned before, offer both passive benefits and active ones, have associated customization lists and the monomyth and rite of passage abilities – in short, they offer more than many archetypes out there and can be considered to be rather diverse and intriguing roles. The first would be the archmage, who gains defensive mirror images as part of his astral suit and these even respawn via psionic focus and unlocks item use, with monomyth abilities adding to the defensive capabilities, providing energy blasts, expanding the blast to spreads and using it for iterative attacks…and, at the highest level, psychoport. The champion bulks you up via the suit and focuses on gaining feats via the monomyth abilities – at 9 points monomyth, you can even use power points to make one of them behave like a wildcard,

In contrast to that, the guardian gains adhesive feet, flexible suit and push and lets you bolster allies via psionic focus expenditure, with monomyth bonuses increasing your AoOs and defensive capabilities. The hierophant sports, surprisingly, cunning (and not wise) and fortification and unlocks cleric abilities as well as limited channel energy. The marshal gains flexible suit and ghostly guidance (reprinted in the reference material) and lets you spend power points to disperse teamwork feats temporarily to allies…and in a powerful and interesting trick, while psionically focuses, as a standard action, you can grant an ally a move action, which is taken immediately. Personally, I think this should have a cap of the ability only affecting a creature once per round, since otherwise, a group of hosts could spam move actions for one target – sure, not OP, but a weird image nonetheless. The overmind role nets you Int-bonus or 1/2 class level to AC and Deep Focus via monomyth and can also net you flight. The trickster role nets you climb and speed (2) as free customizations, emphasizing speed and provides proper trap disarming, power point-based, limited rerolls and better Stealth.

Editing and formatting are very good on both a formal and rules-language level – the pdf manages to capture highly complex concepts in a concise and well-presented manner. Layout adheres to Dreamscarred Press’ two-column full-color standard and the artwork featured on the cover is badass. The pdf comes fully bookmarked with nested bookmarks and the pdf comes with a second, more printer-friendly version.

Doug Haworth, with Forrest Heck as design lead and Kevin Ryan and Adam Boucher as additional designers, delivers a potent, thoroughly amazing archetype here. The host of heroes seamlessly stand next to the thoroughly amazing, high-concept occult psionic options the series has brought us. Conceptually indebted (the pdf acknowledges as much) to the amazing Living Legend, the Host of Heroes has a similar leitmotif, but the execution and exact gameplay is absolutely distinct – this is not just a reskinned living legend. The roles and gameplay of these strange suits is truly evocative and allows for a wide variety of options – and the archetype does something interesting. You see, the aegis can be one of the more potent psionic classes in the hands of a good player. Instead of going into depth regarding the options of the class, the genius monomyth-engine manages to increase the flavorful themes of the base class and add flexibility, big time, to the options of the archetype. This flexibility, when properly employed, however, also takes away from the min-maxy spikes of the aegis – the archetype actively rewards you for playing a flexible, well-rounded character.

There are a few instances herein where I’d consider a caveat for lower-powered games appropriate and the archmage can be pretty brutal, but ultimately, the host of heroes makes for a truly amazing, flexible and well-crafted monster of an archetype. We need more options like this. 5 stars + seal of approval.